Editor's note: The markets will be closed tomorrow in observance of Good Friday. Look for your next issue of DailyWealth on Monday after the Weekend Edition. Enjoy the holiday.

It started with a warning...

Steve asked me to send over some writing samples. He was in the process of hiring me. And he wanted to see the idea I was most excited about at the time.

I was just getting started in the industry. And the most exciting thing I knew was that a dangerous initial public offering ("IPO") was taking place.

Looking back, the writing makes me cringe. But the message was spot on...

Investors who rushed into the "Hot IPO Trap" I warned of lost 86% from peak to trough.

Today, I see a similar setup. Lots of people will likely lose money this time around, too. And I want to make sure you don't fall into today's Hot IPO Trap.

I lived in California before moving to Florida to work with Steve. Specifically, I lived in Mountain View... one of the tightly packed cities that make up Silicon Valley. The area is home to many of the world's hottest tech companies.

Tech giants such as Facebook (FB), Alphabet (GOOGL), Apple (AAPL), and Cisco (CSCO) all call Silicon Valley home. But it's more than just mega companies out there.

Silicon Valley is a hotbed for tech startups. The place is crawling with venture capital. And there's no question – it's an alternate reality.

Driverless cars have been roaming the streets for years now. And just about everyone I knew was working on exotic tech projects. There's a problem, though...

Many of those friends worked at startups that didn't make money. Folks knew it wasn't a phase, either. They knew those companies would never make money.

Everyone knew their hot tech startups had no path to profitability. It didn't matter, though. They weren't after profits.

In California, growth is God. You don't need a great long-term business idea... you know, the kind of business idea that leads to making money. You just need something that can grow revenue, fast.

That mentality allows bad ideas with growth potential to attract hundreds of millions of dollars in funding. I saw it every day when I was living in Silicon Valley.

That was the fourth day of trading for flashy social media darling Snap (SNAP). And excitement around the company was still off the charts.

The Snapchat app itself had been around for years. By 2012, some 20 million photos were being shared on the platform each day. But when the company went public in 2017, it still hadn't developed a way to make money.

In 2015, its operating losses were roughly $382 million against revenue of $59 million. For every dollar that Snap brought in, it lost roughly $6.50.

In 2017, when the company went public, operating losses had reached a staggering $3.5 billion (yes, billion) against $825 million in revenue. It was losing about $4.25 for every dollar it brought in.

The path to profitability at that time was still uncertain. But Wall Street gave the company a pass. It was the Hot IPO Trap of the moment. So I sent my warning.

Sure enough, anyone who bought shares on Snap's first day of trading has lost more than half their money today.

This wasn't an isolated event, though. It's happening again right now...

The ride-hailing, taxi-killing app has been growing like crazy. In 2018, it booked a whopping $50.2 billion in rides.

That's not Uber's take-home pay, though. No, like Snap, Uber has been focused on growth. Its operating losses were roughly $3 billion last year.

Still, the excitement around Uber is astronomical. With plans to go public soon, it's on track to be one of the hottest IPOs of the decade. And it's reasonable to assume we could see a huge jump in share prices when it first opens.

So, what should you do? Simple... Just wait.

The early days and weeks of any IPO are fraught with volatility. And for a medium- to long-term investor, they're not all that important.

If you'd missed Amazon's (AMZN) first year, you'd still have made more than 200 times your money.

If you'd waited a year on Facebook, you'd have beaten the IPO price and you'd be sitting on gains of more than 500%.

And if you'd waited a year on streaming giant Netflix (NFLX), you'd have wound up with more than 200 times your money.

Remember, we're investing, not gambling. Taking time to asses an uncertain situation doesn't always mean you're going to be left behind. It means you're being smart.

We simply don't know how Uber will do yet. But history says it's best to wait and see at the start.

After the IPO clouds clear, we'll get a better picture of the company's path. Until then, be patient.

In investing, just one impulsive act could cost you dearly... That's why Whitney Tilson says, "Never be dumb, even for a single day." To learn how to make better investing decisions and avoid mistakes, check out his three tips for beating the market right here.

"You'll always find holdouts on the wrong side of a bubble," Vic says. "This asset is no exception." Learn more about another hot idea that investors should treat with caution right here: The View From the Other Side of a Bubble.

Many Americans are enjoying active lifestyles these days. The U.S. health and fitness industry – worth $30 billion today – has been growing by 3%-4% a year for the past decade. It’s the kind of trend we pay attention to as investors. So today, we’re checking in on a company that keeps people comfortable during their workouts…

Lululemon Athletica (LULU) is a $22 billion athletic-apparel maker. The company specializes in clothes and accessories for yoga aficionados… It sells pants, shirts, and jackets in breathable fabrics that dry fast when you’re working up a sweat. Thanks to its specialized focus, Lululemon has built a cult-like following. And it’s raking in cash as a result… Last year, Lululemon reported sales of $3.3 billion, 24% higher than 2017.

As you can see in today’s chart, LULU shares are soaring. The stock is up roughly 80% over the past year, and it recently hit an all-time high. As long as people keep signing up for yoga classes, this stock should continue higher… 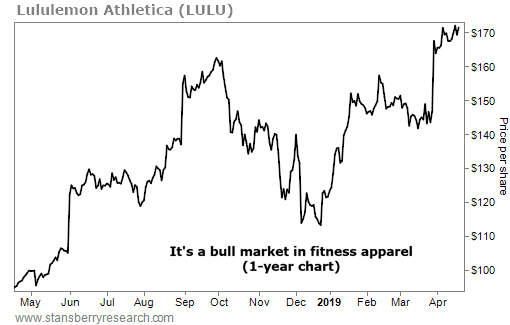