It's a new year, with a new danger lurking in the shadows...

At least, that's the way fund managers see it. And not just any fund managers... All together, these pros oversee $1.1 trillion in assets.

They're the "go to" guys on Wall Street. They get paid to grow other people's assets.

Unfortunately, these folks have a bad track record when it comes to knowing what's a real risk in the markets. They tend to cry wolf at whatever's in the headlines each month.

Now, they've found a new fear to worry about. And the most recent "wolf" is likely an illusion once again.

Each month, the Bank of America Global Fund Manager Survey goes out to hundreds of investment pros from all around the world. Last month, 371 managers took part in the survey...

Questions ranged from whether managers are bullish or bearish on stocks, to what threats lurk in the shadows.

The latter is where the new fear comes in. Each month in this survey, we get an update on what the pros think is the biggest risk to the current market. In the past, it has been trade wars, the U.S. election, COVID-19, etc.

They see the Federal Reserve as a top threat to the market. But they're dead wrong. Here's why...

First, spotting the next "black swan" is almost impossible – by definition. Most events that take out a market aren't easy to see coming.

In fact, most come with no warning at all. Think about the financial crisis back in 2008. Very few people knew that the housing market was about to be in shambles... Or, look at the effect of COVID-19 in 2020.

Those were true black-swan events. Fund managers have been trying to spot the next big risk to the market for years... And time and time again, they have failed to highlight the real dangers.

We've seen several examples of this over the past decade...

In 2012, folks thought the European Union ("EU") sovereign debt crisis would be the catalyst to take out the stock market. Greece had recently defaulted on its debt. The country had to get bailout loans to stay afloat. And everyone was worried that a widespread default in Europe could cause markets to crash.

But that didn't happen. The bull market in U.S. stocks kept climbing. Take a look... 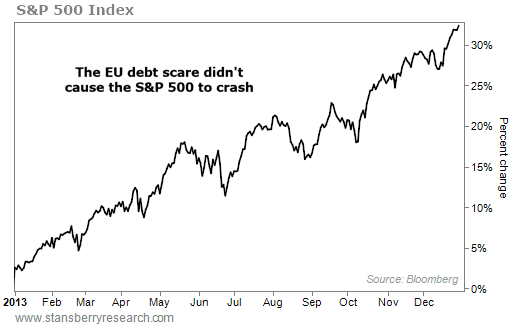 The S&P 500 Index soared 32%. Meanwhile, the EU sovereign debt issue never grew into the tail risk that would wipe out the market.

Another example of fund managers getting it wrong came in late 2013... That time, it was the fear of a "hard landing" in China.

The idea was that China's growth was going to slow too much. As a nation, it was transforming from a high-growth emerging market to a slower-growth developed market. People feared that the slowdown would drag on the global markets. 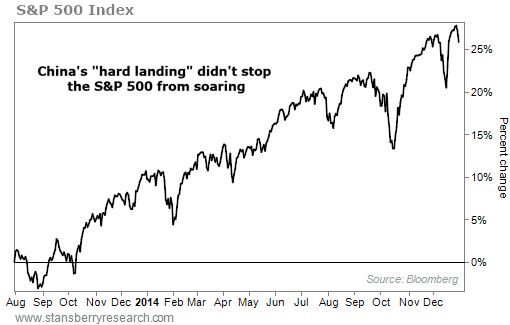 Again, China's financial stress never materialized into a real issue for the U.S. market. The smart plan was to continue to own stocks.

We've seen fund managers raise red flags like this repeatedly. Other examples include the trade war between the U.S. and China, the 2020 U.S. election, and COVID-19...

The funny thing is that COVID-19 didn't become a tail risk until March 2020. That's when the S&P 500 bottomed – before taking off higher.

That's a running theme with these fears. They're never a true tail risk... something that no one sees coming. Instead, they're just whatever seems scariest at the time... the thing that everyone already sees.

Today, fund managers are highlighting the hawkish Fed as the next big tail risk. But that doesn't mean we should run for the hills.

They've been wrong plenty of times before. We could see stocks turn around and rally higher despite the fund managers' fears.

Plus, as I explained in DailyWealth last month, rate hikes don't actually spell doom for the market. Stocks consistently moved higher during the last few rate-hike cycles. And they're likely to do the same this time around.

So don't let the investment pros scare you out of the market. They've cried wolf one too many times. And despite the latest fears in the headlines, this bull market will likely go much higher in 2022.

Last year was a steady climb higher for stocks. And the sudden pullback this month might have you spooked. But instead of worrying, we're looking at these two indicators to see what's really happening in the market... Read more here: A Market Health Check as We Enter 2022.

It might feel like the end is near for stocks. But bull markets don't crash just because they've been running for a long time. And this sector could outperform as the rally continues... Check out Chris' two-part essay here and here.

Market Notes
BEWARE THE ALLURE OF BUYING A 'FAD STOCK'

Longtime readers know that when everyone is talking about a stock, it’s usually time to back off. Once speculators pile onto the bandwagon, eventually there’s no one left to buy… And that means shares have nowhere to go but down. Today’s company is a prime example…

Snap (SNAP) is best known for creating the multimedia messaging app Snapchat. It allows users to send picture and video messages – with a vast array of filters and special effects. The app quickly gained popularity with young users. But when its rival TikTok became the most downloaded app worldwide in 2021, it ate into Snap’s customer base. And recent changes to Apple’s iPhone privacy settings hurt Snap’s advertising business… leading to a pullback. Snap’s shares crashed 22% after missing third-quarter revenue expectations.

As you can see in today’s chart, SNAP shares are still struggling. They’re down 40% over the past year… And they just hit a new 52-week low. This serves as a harsh reminder that after folks crowd into a fad stock, big declines are almost inevitable… 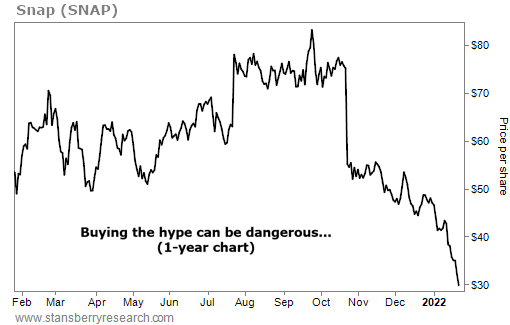