The IRS Finally Did Something Right
By Dr. David Eifrig
Wednesday, January 2, 2019

Taxes are a major drag on building wealth.

For example, take the median federal tax burden. It's about 11%. That means for every dollar you make, you keep only $0.89.

What if every American could keep that 11% and combine it with a personal savings rate of just 4%? They'd be saving 15% a year.

And if you make an above-median income, your taxes get much higher than 11%.

Plus, even after you pay income taxes... state sales taxes... property taxes... and add to your savings... you still have to pay additional taxes on your investments. Capital gains, interest, and dividends all create taxable events.

Many folks pay a third – or even half – of their earnings to the government in some way or another...

Retirement accounts are an easy way to avoid these onerous taxes.

And recently, the IRS announced that it's going to let you put away a little extra money...

This is good news for all the savers out there.

When you use a pre-tax income vehicle like an IRA or 401(k), you get to park your cash and compound your wealth tax-free.

From that point on, you won't have to pay taxes on capital gains, dividends, or interest income for any stocks, bonds, or funds you hold in your IRA. (If nothing else, this makes for simple accounting come tax time.)

Even better, you make contributions to a traditional IRA with pre-tax dollars.

As an added bonus, the IRS also raised income phase-outs on the Saver's Credit.

The credit amount is also based on your household earnings. For example, in 2019, a married couple earning between $41,501 and $64,000 earns a tax credit equal to 10% of their IRA contribution.

That's the highest your income can go before you're phased out of the Saver's Credit entirely. In 2018, the limit was only $63,000.

Remember that ultimately, how much you save will be the difference between a lifetime of poverty... or one of wealth.

With two 401(k)s and two IRAs, a married couple interested in saving aggressively can save $50,000 a year without paying income taxes. That's a savings of tens of thousands of dollars that you earned and get to keep, and that you can spend later in life on whatever you'd like. And by investing that money, you can compound your earnings quickly. Before you know it, you'll have wealth and riches to enjoy in your retirement days.

Getting there just got a little bit easier. The IRS is giving you a chance to keep more of your hard-earned cash out of its reach. So take full advantage of it...

Share this article with the people you care about. And if you haven't already, start saving in a retirement account today.

If you've ever dreamed about where you want to retire, you need to plan ahead – or else unexpected costs could get in the way. Get the details from Doc right here: Will You Ruin Your Retirement Paradise?

You must invest if you're going to compound your wealth steadily over time. And as Doc explains, an important secret can help you make smart investing choices over the long term – even through the market's ups and downs... Read more here.

Today, we’re looking at one of the hardest-hit victims in the shift to online shopping…

Regular readers know all about this trend. Folks just don’t come out to America’s malls like they did years ago. Many mall-based retailers have failed to adapt to the new world of e-commerce. Department-store chain JC Penney (JCP) is a great example…

The company hasn’t been profitable since 2010. Over the past eight years, it has posted roughly $4 billion in losses. In October, JC Penney hired Jill Soltau as its new CEO after Marvin Ellison jumped ship for home-improvement chain Lowe’s (LOW). But in the third quarter, the company reported more of the same… Sales at JC Penney stores open for more than a year fell 5.4% in the quarter. Analysts only expected a 0.6% decline.

Today, JCP shares trade for roughly $1 – down around 70% from a year ago. And the stock has fallen to a new all-time low. The future looks dark for this member of the “retail old guard”… 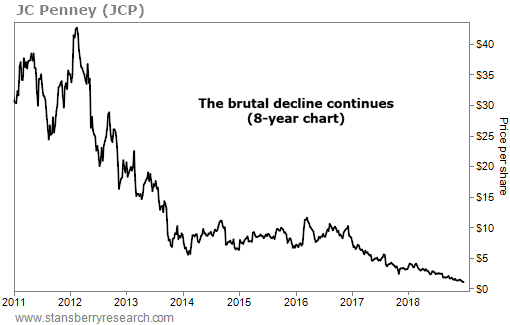