The 'Market Overhaul' Is Already Starting... Make Sure You're In
By Matt McCall
Saturday, October 30, 2021

Innovations throughout history have led to one industry displacing another...

Some 250 years ago, the steam engine revolutionized the global transportation of goods. Nearly 100 years later, the automobile replaced the horse and buggy and set into motion numerous new industries... The next major innovation was electricity ‒ a transformative creation that has monumentally improved our quality of life.

Then in the 20th century, the personal computer and the Internet emerged. Together, they created explosive new sectors that have totally transformed the business landscape.

But of course, innovation hasn't stopped. Today, we're more innovative than ever.

And to that point, I want to discuss what's taking place in a few sectors that will play out with explosive growth opportunities through the "Roaring 2020s"...

It's surprising that we still need to post "Employees must wash hands" signs...

After all, the average person knows that washing our hands can help stave off disease and illness. But 150 years ago, medical professionals didn't even know that. They had other theories, and it cost millions of lives.

Now, we wash our hands and pasteurize milk before we drink it. And doctors wear masks, gloves, and gowns when handling patients.

Our knowledge of germs is one of the greatest advancements in human history. We can now detect, treat, and even eradicate them just as we did with smallpox.

Along the way, a giant germ-fighting industry emerged. It has permeated every aspect of health care... and since the COVID-19 pandemic, every aspect of work and play as well. It has generated trillions of dollars in wealth over the past century.

And now, like germ fighting in the past, a new field of lifesaving science is coming soon...

It's a revolutionary new field called "gene editing." Once it goes mainstream, it will likely save, lengthen, and improve the quality of billions of lives.

Gene editing is just what it sounds like... It involves altering an organism's DNA to lead to better health. And while humans have tinkered with this idea for decades, only in the past few years has a new technology radically changed what we can do in this field.

It's a gene-editing technique that allows for the modification of any region of a genome. It can be performed on humans or animals with accuracy and without harming other genes. This technique also has the potential to wipe out a disease entirely...

And similar to germ fighting, it has the potential to create trillions of dollars in wealth for the companies ‒ and eventually the investors ‒ who create the treatments, drugs, and other lifesaving goods.

Gene editing is the result of the Human Genome Project ("HGP")...

This hugely successful international effort focused on mapping the entire genome of a human – or the complete set of our human DNA. It cost billions of dollars to complete between 1990 and 2003.

But by 2022, the cost of sequencing human DNA should drop below $100, according to ARK Invest. And of course, the lower the cost, the more people will do it.

The reason people would want to map their genes is simple... It has led to huge medical breakthroughs – with the most important being the ability to change existing genes.

Because of the HGP, scientists have been able to develop a gene-editing process that has huge potential. Being able to sequence genes helped them find mutations... And once mutations are discovered, they can then be edited or replaced.

It's amazing stuff. It will allow scientists to eliminate diseases that currently have no cure.

And it's not far from mainstream reality...

Outside of the fact that gene editing is on track to save lives, an exciting investment angle to the technology also exists... Not only are you supporting the companies by investing in them, but you're also setting yourself up for what could be some of the biggest winners of your lifetime.

To be clear, we're still years away from being able to fully cure diseases using this research. But from an investment viewpoint, now is the time to buy... before this health care megatrend takes off.

Other sectors are being overhauled by "megatrends" as well...

Wildfires, floods, and unseasonably warm temperatures are a reminder that climate change is a huge concern.

However, at least to some degree, one emerging tech trend can help us alleviate it...

I'm talking about renewable clean energy – specifically, using the power of the sun.

Figuring out how to harness solar energy has been an unsolvable challenge for decades. Until recently, we didn't have the technology to make solar power an effective answer to our clean-energy woes. But that's changing now...

The first solar panel was created in 1954. It had 4% efficiency – that is, it converted only 4% of the sunlight it captured to electricity.

Today, efficiencies are significantly better – at around 20%. But that's still well below the 30% level that most experts believe is the highest possible efficiency for single-junction solar cells.

Here's the thing, though... Single-junction solar cells aren't the future.

Multijunction solar cells – which house many semiconductors instead of just one – are the future. And they're estimated to reach a maximum efficiency of 87%.

This is where we're headed...

As a result, we've seen massive expansion in the solar-power industry over the past decade. According to a study by the U.S. Department of Energy, solar energy could account for 40% of the country's power generation by 2035.

This expansion is happening on a global scale, too...

As represented by the auburn-colored segment in the charts below, power generation from solar energy is expected to increase from just 2% of the total market in 2019 to 23% by 2040.

Also notice the dramatic decrease in the size of the blue segment. That represents coal, a leading source of pollution... 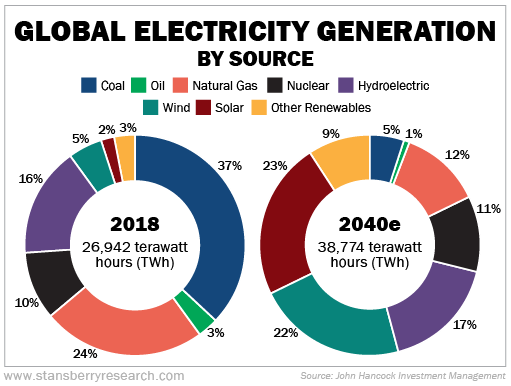 In short, clean energy is picking up speed.

It's a massive undertaking...

But I believe it's achievable, thanks to the incredible power of several converging innovative technologies.

Specifically, improved technologies have dramatically decreased the cost of solar cells and inverters, leading to an 82% decline in the total cost of solar projects.

Costs will continue to fall as efficiencies improve, leading to widespread adoption of solar power as an economically viable energy source.

The solar industry is still in its infancy – like many of the hypergrowth megatrends we follow in The McCall Report and Matt McCall's MegaTrend Investor. But it's about to shift into hyperdrive... And we, as investors, need to be ready.

Meanwhile, as you know, cars really haven't changed much in 135 years...

For the first time in more than a century, the automobile industry will undergo a major conversion. Trillions of dollars are already moving into new technologies that will lead to the mass rollout of electric vehicles (EVs).

The EV trend has been one of my favorites to research in the past decade. And it's finally starting to enter the takeoff phase...

Even with more than two decades on the roads around the globe, EVs still only command a tiny share of the total number of vehicles... Price, driving range, and battery technology have been the main barriers of growth.

Last year, for example, fewer than 2 million EVs drove across U.S. roads – about 2% of all vehicles. The number today remains small, but it's three times as many EVs as in 2016. As I wrote in The McCall Report...

The year 2020 showed that during the Roaring 2020s and beyond that EVs will continue to take market share from traditional vehicles. According to research firm ARK Invest, global EV sales could reach 40 million by 2025, up from 2.2 million in 2020 – a compound annual growth rate of 82%!

This change in travel will not be good news for gas stations, but it will be big for companies that make EV-charging stations. And it will unleash an entirely new industry.

The thought of a car without a steering wheel could be a bit unsettling for the average person. But as much as you may want to fight that AVs are the future... the future is already here.

You can find AVs on our roads today. And this is an opportunity nearly certain to come to fruition in the coming decade.

It will bring unimagined new industries into our everyday lives... I'm talking about parts makers, chipmakers, and much more.

There are companies in these sectors that might be the source of a 100X return... I'm talking about the next Tesla (TSLA).

In short, we're standing at the beginning of an incredible convergence of technologies that will revolutionize almost every aspect of American life. The economy will boom despite the very real concerns of inflation, politics, and money printing... And the stock market will hand investors incredible returns.

The Roaring 2020s are upon us. It's time for us to seize the opportunities from these megatrends before everyone else. And as the years go by, we'll keep reaping the rewards.

Editor's note: Last week, in front of thousands of viewers, Matt McCall shared a basket of stocks that will set investors up for 10X returns... or more. These companies are at the forefront of the biggest megatrends Matt sees unfolding over the next decade. But you need to invest in them now before they go mainstream. In case you missed it, you can catch the replay presentation right here.