The Most Important Lesson From My First Financial Crisis
By Steve Sjuggerud
Tuesday, March 31, 2020

"If I died today, nobody would even know," I thought to myself.

Thirty yards below me, outside my hotel window, cars were on fire as an angry mob of rioters started hurling whatever they could find at the hotel.

I was alone in Jakarta, Indonesia. It was 1998... during the worst stretch of the Asian financial crisis.

I was there to meet with the head of Indonesia's central bank. I was surprised that a 20-something nobody (me!) could get a meeting with him – the most powerful "money man" in the country.

I asked him what he was going to do to save the financial markets. "Got any ideas?" he replied. He wasn't joking. Times were terrible, and he was desperate.

Indonesia's stock market fell more than 90% in U.S.-dollar terms, peak to trough – as brutal as a stock market wipeout gets.

I flew straight into the heart of the financial crisis. From Indonesia, I made my way to Thailand... Singapore... the Philippines... and Malaysia. It was crazy.

I experienced it all firsthand. And I saw something you need to understand in today's volatile market – the key to knowing when the pain will end...

When the Asian crisis really kicked in – and markets and currencies really started falling – it was all over the financial news. Day after day. You couldn't get away from it.

It started as a small problem with Thailand's currency... Then it spread, engulfing each Asian country one by one. Eventually, Russia collapsed as well – the entire Russian market also fell 90%.

And as the problem got worse, the news coverage grew exponentially.

The financial crisis ended eventually... but only long after it had disappeared from the mainstream media news cycle.

As I said, I experienced this firsthand. And over the next 20-plus years, I saw the same news cycle again and again.

The financial crisis (wherever it was) didn't end just because it exited the headlines. It continued to inflict pain on investors.

In short, the bottom only happened once people gave up.

I tell you this today because the financial markets are all over the mainstream news. Everyone is talking about what's happening on Wall Street – more so now than I can ever remember.

Unfortunately, my friend, that alone is a bad sign.

I have experienced a lot of major bear markets firsthand. I have seen many markets fall – dramatically. I have seen the cycle of fear you are experiencing now in the financial markets... many times.

I could talk to you today about interest rates, or economics, or other similar historical events. But to me, this is all you need to know...

The stock market will not bottom when it is all over the mainstream news.

The bottom only arrives long after that – when the stock market falls out of the news completely... when most people have forgotten about Wall Street. Until that happens, stocks can continue to fall.

Now, this sounds grim. But it isn't all bad. The important thing is, past major crises around the globe give us an investing blueprint to follow. So while we can't know exactly how things will play out, we can follow the signs to get a better idea.

Tomorrow, I'll share the specific blueprint I'm following. I'll explain exactly how we'll know when this crisis is over... and when it's time to act.

P.S. My friend and colleague Porter Stansberry has been quiet about the markets in recent years. But last week, he put out a big prediction. In fact, he hosted an online event to share the opportunities he sees taking shape in today's crisis. If you'd like to hear what he has to say, you still can for a limited time... To learn more, click here.

Inexperienced investors are still eager to "buy the dip." But if you're not careful and you don't wait for an uptrend, you can wind up selling at the bottom for a huge loss... Get the full story here: No Bottom Yet: The Dumb Money Is Still Buying.

"Market bottoms don't happen until folks reach the point of maximum fear," Chris Igou writes. Right now, everyday folks are still hunting for bargains in stocks. But the bottom won't happen until they decide they don't want to be in the market at all... Read more here.

Today, we’re highlighting a media company that has lost its content offerings because of the COVID-19 pandemic…

Coronavirus cases in the U.S. have now swelled to more than 155,000. And as the number of patients grows, states and businesses have put measures in place to stop the virus’s spread. While necessary for public health, these changes are a huge blow to businesses. Today’s company is yet another example…

MSG Networks (MSGN) is a $620 million sports production and content provider. It owns and operates two sports channels – the MSG Network and MSG+. These channels broadcast games from the New York Knicks (basketball), New York Rangers (hockey), and other New York-based sports. But now, the COVID-19 pandemic has caused sports leagues like the NBA and NHL to temporarily suspend games… which means viewership will likely plummet.

As you can see in today’s chart, MSGN shares just hit a new low. The stock has fallen more than 50% over the past year – and shares currently sit at their lowest prices since 2012. It’s more evidence of the coronavirus’s widespread impact on the U.S. economy… 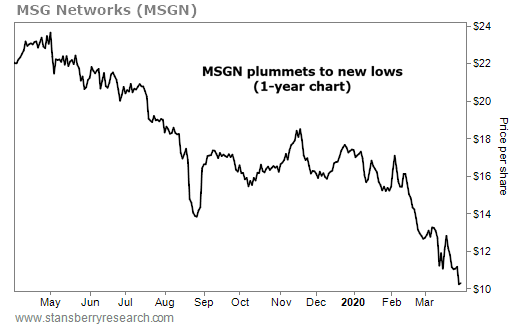