The Perks of Going 'Back to the Future'
By Brian Tycangco
Wednesday, September 9, 2020

In it, the main character Marty McFly time travels in a nuclear-powered DeLorean to right old wrongs and change the course of his life.

Living out here in Asia, I often feel like a Marty McFly (minus the cool DeLorean). That's because being here today is like going back in time to when America's biggest success stories were just getting started.

It's creating a massive opportunity. But unfortunately, most Americans are missing it completely.

I don't want you to make the same mistake. So today, I'll share exactly what's going on...

The idea of going back to the future should be darn appealing for investors.

I'm talking about finding companies like Microsoft (MSFT), Apple (AAPL), Amazon (AMZN), and Facebook (FB) before they became the industry giants they are today.

Today, these four U.S. giants alone are so big, they make up nearly one-fifth of the S&P 500 Index. Three of them are worth well over a trillion dollars.

Even Asia's brightest stars are in a league below. And that's exactly why our opportunity is so great today...

Asia's largest company, Chinese e-commerce giant Alibaba (BABA), is worth roughly $740 billion. That's big – but it's still barely a third of Apple's market capitalization. And it's smaller than Facebook, too.

Asia's second-largest company, Tencent (0700.HK), is also based in China. It's worth slightly less than Alibaba at around $630 billion.

Buying into these Chinese companies a decade ago was like going back to the future then. They've grown tremendously – and it's not over yet.

But here's the thing you must understand... China was just the opening act.

China's economy is now 13 times larger than when I started in the business. The U.S. just barely managed to double its economy during the same period.

There are still plenty of opportunities in China, of course. But the cream off the top is already gone. The "easy" money has been made.

If we want to earn incredible profits, you need to look further than China. You need to focus on emerging markets as a whole... where the "Next Chinas" are on the rise.

You might not realize it, but China's success is a direct result of its growing middle class. China adds roughly 24 million city dwellers to its middle class each year. But the base is now too big – just two years from now, roughly 650 million people will make up China's middle class. So it's simply not having the same economic impact as it did 20 years ago.

Meanwhile, other emerging markets are just at the beginning of that steep upward curve in the middle-class boom.

India is growing so fast, its middle-class population is expected to balloon to 580 million by 2025, up sevenfold from 2018. That's 70 million people joining the ranks of the middle class each year.

Another large Asian nation is Indonesia. It has a population nearly the size of the U.S.

According to the McKinsey Institute, its middle-class population will reach 135 million by 2030, up from just 52 million today. That's another 8 million or so people in the Next Chinas going up the socioeconomic ladder each year.

If you include Indonesia with other emerging economies of Southeast Asia, like Malaysia, the Philippines, Thailand, and Vietnam, the number doubles to more than 15 million a year.

I've only seen this kind of economic prosperity once before – in China. And when you're faced with this intense level of wealth creation, it's fertile ground for future Amazons, Apples, Tencents, and Alibabas.

Most investors are completely missing this opportunity. They think of emerging markets as a laggard of the last decade... or worse, as a dangerous place to invest. But that couldn't be further from the truth.

This is where the big opportunities are just getting started. And if you're willing to get a little uncomfortable with your investing, I'm certain a few smart bets in emerging markets will make for incredible profits in the years to come.

P.S. I recently went on camera to share the details of this unstoppable opportunity. You see, the biggest gains from emerging markets have rarely been available to ordinary investors... But that has changed completely. And now, the tailwinds are stacking up for potential quadruple-digit gains in the next three to five years. Get the full story here.

"A new bull market is just getting underway," Brian writes. And he's not talking about the resurgence in U.S. stocks. This new trend has the potential to make the gains from the last U.S. bull market look tiny by comparison... Get the full story here: The Biggest Opportunity of the Decade Is Starting Now.

China's economy is still growing, and its adoption of new technology is still lightning-fast. But Chinese tech companies are still unloved and ignored. Thankfully, we'll see a one-click option that can help us take advantage of the raging bull market to come... Read more here: This Opens the Floodgates to the 'New Nasdaq.'

Market Notes
IN EMERGING MARKETS, COMPANIES CAN TAKE OFF IN A HURRY

In many parts of the world, strong companies are trading at big discounts to U.S. stocks. That’s because American investors are less likely to trust them – or even consider them. But emerging markets also offer more growth potential than developed markets. That means a well-timed investment can produce outsized gains. Check out today’s example…

Azure Power (AZRE) is a $1 billion developer of Indian solar-panel installations. In a country where millions of people still lack electricity, and where pollution is a major concern, there’s plenty of room for companies like Azure to grow. Sure enough, in the most recent quarter, Azure’s $52 million in sales was a 16% year-over-year gain.

As Azure gains traction in India’s electricity market, shares have soared about 150% over the past year to a new all-time high. While the emerging markets have more risk, their stocks also have more room to explode higher… 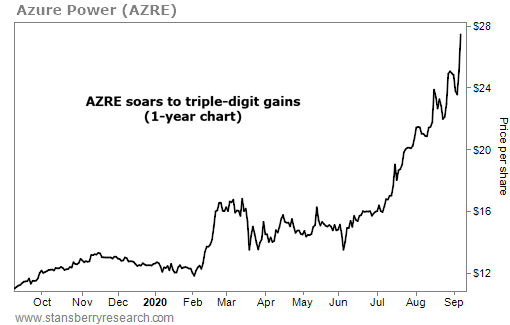