Lots of novice traders get it backwards...

Instead of reducing risk, they trade in a way that increases risk.

They tell themselves that it's the smart move... that they're increasing their profit potential.

But really, they just have a hard time admitting that they're wrong and cutting their losses. They set themselves up to fail.

Today, we'll show you how to avoid that mistake. It's a simple technique you can use to increase your profit potential, reduce your risk, and set yourself up for long-term trading success.

Let's start by looking at the wrong way to do things...

Joe has a $100,000 investment portfolio. He finds a stock that's trading at a low valuation. He feels the business is misunderstood. And the price chart looks like it's forming a bottom.

He thinks, "I know this is a great stock. It went up right after I bought it. It will go up again. I should take advantage of this drop to add to my position at a lower price." So... he buys another $2,000 worth of shares. Joe now has $3,600 in a losing trade.

Joe's idea doesn't work out. He finally throws in the towel after his stock falls another 20%. The result is a $1,120 loss.

Joe's actions may seem crazy written out like this... And they are. But a lot of people do the same thing... repeatedly. If you've never made this mistake, we'd bet you're in the minority.

This "strategy" is so common, it even has a name: "averaging down." By buying more shares at a lower price, the average cost per share drops.

This is completely backwards. Instead, you should consider the alternative: "scaling in."

Scaling in to a trade involves starting with a smaller-than-normal position, and building that position over time. There are different ways to scale in... But here's one we've used with success in our DailyWealth Trader (DWT) newsletter...

First, you choose your stop loss. Then, you buy a small position. Maybe it's one-third of what you consider "normal" for a speculation.

If shares drop to your stop loss, you're out. You take a tiny loss and move on.

If shares rise, and the trade still looks good, you add another one-third position. At this point, you tighten your stop loss. You do this in a way that keeps your potential loss on the combined position as small as or smaller than your original "tiny" loss potential.

In other words, you can reduce your risk and increase your profit potential at the same time.

If shares continue rising, you can do the same thing again. Buy more and tighten your stop.

At this point, your worst-case scenario will likely be closing the trade for profit. Your best-case scenario is big profits on a speculation that had very little risk, from start to finish.

Now, let's look at an example of this idea...

Imagine you find a cheap, misunderstood business. We'll call it Acme Corp (ACME). Acme's price chart looks like it's forming a bottom. And you think it has at least 100% upside potential.

Acme has a history of being volatile. So you want to use a wide, 33% stop loss...

This move – adding more shares and tightening your stop loss – increases your profit potential and reduces your risk.

And you're still giving the stock 28% worth of "wiggle room."

If shares rise another 35%, you may decide to add another one-third position. Now, if you tighten your stop to 25% (below the current share price), you would still book a profit even if you stopped out.

Of course, that's looking at the worst-case scenario each step of the way. On the upside, you'd now have 114 shares – or 128% more than you initially purchased. Your upside from this point forward is dramatically larger... And at no point did you risk even $1 more.

Here's what we want you to take away from this essay...

When you scale in to a position as it moves in your favor, you will always risk less than if you buy a full position all at once.

And because you're already profiting, you know the market agrees with your idea. Unless something changes, you should continue to make money.

When you average down as a position moves against you, you're adding to your risk even though the market is telling you you're wrong. Unless something changes, you should continue to lose money.

In sum, don't be like "Joe." The next time you get excited about a speculation, think about how much you're willing to risk before you think about the upside potential.

If you're right and it does have triple-digit upside, you'll still make great money by scaling in. The only thing you'll lose with this strategy is an unacceptable amount of risk.

This is how trading pros increase their profits without increasing their risk. And now you can use this strategy, too.

Editor's note: Do you know when you'll buy – and when you'll sell? Having a plan will help you profit from the Melt Up... and avoid the worst of the Melt Down. That's why Steve is sharing an important message today. If you're worried about when to exit your stocks safely, watch this video now.

"When it comes to science, medicine, and investing... few things work better than good rules of thumb," Dr. David Eifrig writes. These ideas might feel simplistic, but they are time-tested formulas for success... Read more here: Make Safer Investments With These Four Rules of Thumb.

Eventually, a recession will hit. And while we want to ride the gains on the way up in this Melt Up, you need to know how to hedge a bullish outlook with intelligent portfolio protection. Get the full story here.

Today’s chart shows us the perils of heavily indebted companies…

Some companies borrow money to invest in their businesses… but others need to borrow just to stay alive. Even doomed companies can see shares rise during a raging bull market. But when trouble strikes, investors run for the exits. Just look at this money-losing business…

Hertz Global (HTZ) is one of the world’s largest rental-car companies, with more than 10,000 locations for its Hertz, Dollar, and Thrifty agencies. But even though sales hit a record $2.33 billion in the most recent quarter, the company lost $118 million… And it’s $17 billion in debt, too. What’s more, Wall Street expected slightly better revenues of $2.34 billion.

With the market on edge due to coronavirus uncertainty, that small miss was enough to send HTZ shares plummeting. They dropped more than 40% since the company announced earnings on February 24. Heavily indebted companies like Hertz are in trouble… and as soon as something goes wrong, the market remembers in a hurry… 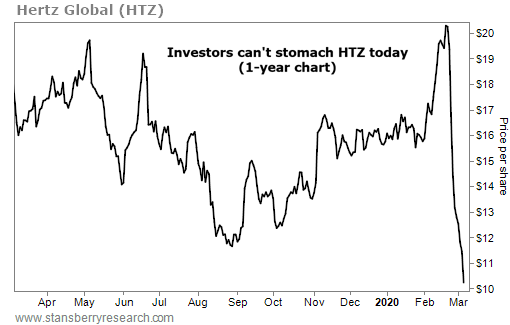