The Real Loser in the U.S.-China Trade War Isn't Who You Would Expect
By Steve Sjuggerud
Saturday, June 1, 2019

He was stationed in Iraq and Afghanistan as a counterterrorism officer for the CIA. He knows what's going on behind the scenes with major world governments at a deeper level than most people in America.

And he is a China skeptic.

These days, Buck's conservative radio show broadcasts out of D.C. live on weeknights. It comes on immediately after The Rush Limbaugh Show and The Sean Hannity Show. He also appears frequently on Fox News, commenting about what's going on in Washington.

Buck had me as a guest on one of his radio shows last year...

And he expressed some of his skepticism about China while on the air with me. Among other things, he raised the question of what a trade war might do to the Chinese economy.

"Buck, look, just come with me to China," I urged him on his show. "Maybe we can get you to come on one of our trips and see what you think."

To his credit, Buck took me up on my offer... He joined me in China last month, along with a few busloads of subscribers.

So what did Buck (and the rest of our group) think?

After a day at the Great Wall, and then a two-day investing conference at the Four Seasons Hotel in Beijing, the overwhelming opinion from our group was that China has "eaten our lunch."

It's no contest... Game over. Beijing is more advanced and modern than any city in America... by far.

And after a few days there, something else becomes crystal clear – something that turns the typical American view on the trade war completely upside-down...

China is no longer an export-driven economy.

Not only that, but tech companies like Huawei, Xiaomi, and DGI make the best stuff in the world – period. We can't compete in the U.S. The Chinese don't need an iPhone or a GoPro camera – not when their own stuff is far better and far cheaper.

The folks in Washington don't get these simple facts...

"China is going to eat our lunch? Come on, man," presidential hopeful Joe Biden said recently during a speech in Iowa. "I mean, you know, they're not bad folks, folks. But guess what, they're not – they're not competition for us."

Is Biden really that stupid?

The problem isn't just underestimating China, though. Some of the folks in Washington think we can actually beat China at its own game. When it comes to this, the stupidity extends to the other side of the aisle as well...

In the White House, trade adviser Peter Navarro – a self-proclaimed China trade expert – literally wrote the book Death by China in 2011. He is as anti-China as it gets. He will personally derail any rational China trade deal, as long as he has any say in the matter (though Treasury Secretary Steven Mnuchin and economic adviser Larry Kudlow regularly shut him down).

The reason is simple: Navarro doesn't see the China that exists today. He sees the China of years ago... a country flooding the global economy with poorly made exports.

What are these guys in Washington thinking?

How can they be so blind to the obvious?

I'll tell you this... Navarro turns 70 in July, and he made his first known trip to China last year. Yes – the White House China trade "expert" had never been to China in his life.

This is partly why I bring friends, colleagues, and subscribers with me every chance I get. Most Americans have no idea how advanced China is today. You have to see it for yourself.

When we started this year's trip, the biggest question on everyone's mind was about the trade war...

It's still the big question for investors around the world...

We nearly reached the finish line. But last-minute complaints from the Chinese mean the trade war is back on...

Last month, China abruptly changed its position on some key terms outlined in a potential trade deal. Most of those were commitments to change its laws – to force Chinese corporations to play fair and respect intellectual property.

Chinese officials argued that changing the laws in China takes time... that it's a complex bureaucratic process, and the U.S. is making unreasonable demands.

Regardless, the U.S. responded by raising tariffs on $200 billion worth of Chinese goods. And China planned to hike tariffs on U.S. goods starting this month.

We don't know how long the tension will last this time around...

Will China regroup and choose to make the concessions it had originally agreed to? Or will Trump be willing to back off on demands he previously labeled "non-negotiable?"

I personally think we'll get a resolution sooner rather than later. It's in everyone's best interest. Trump wants to get re-elected. And China wants to get out from under this cloud of uncertainty.

But if I'm wrong, we need to explore how bad the damage could be. If China's economy is weakened severely by tariff hikes, it could affect investments in Chinese companies.

In my True Wealth Opportunities: China advisory, we looked at this when the trade war kicked off last year...

We examined just how vulnerable China really is to a potential trade war. What we found was surprising. And the shocking answer remains the same today...

The U.S. stock market is more susceptible to a trade war than China's stock market. And it's not even close...

Last year, the folks at global index provider MSCI proved this. And its research is still valid today – while the data are from March 2018, these numbers don't tend to change much.

To do its analysis, MSCI compared its U.S. stock index and its China stock index. Specifically, it looked at how much revenue the companies earn outside their home countries.

It turns out Chinese companies don't earn much revenue from the U.S. In fact, only three sectors earn more than 2% of their revenue there. Take a look...

Major Chinese companies don't sell much to the U.S., as you can see. Trump's latest round of tariffs includes hikes on everything from meat and eggs to hats and buttons... Yet only the technology and energy sectors bring in a meaningful amount of U.S. sales.

For better or worse, our major companies get a lot of sales from overseas.

That's part of the magic of the U.S... We provide goods and services all over the world. And we have one of the most dynamic economies as a result. But in the event of a trade war, that also means the U.S. has more to lose.

The table below shows this clearly. The U.S. gets much more revenue from China than China gets from the U.S. Take a look... 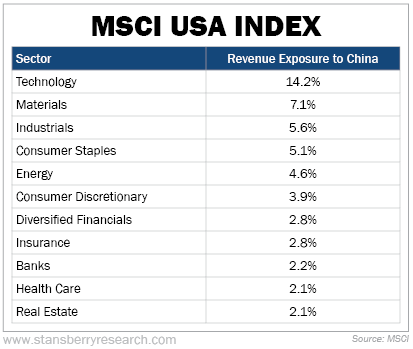 Four U.S. sectors get 5% or more of their revenue from China. And every major U.S. sector has 2% exposure or more – not the case at all for Chinese companies.

Now, this doesn't mean the U.S. will collapse if it stops trading with China...

So while the easy narrative on the trade war is that the U.S. has the stronger position, that narrative isn't true. Folks who believe this haven't seen and don't understand the new China. They continue to think of China as the world's sweatshop... producing low-cost goods for the U.S.

It's people like Peter Navarro who push this idea...

But it's not based on reality. Worse, it's a dangerous belief for the main trade negotiators to have...

You see, if the folks in Washington believe the U.S. doesn't have a lot to lose, they might take a trade war further than they should. But the numbers prove that U.S. companies need China much more than Chinese companies need the U.S.

A drawn-out trade war would hurt U.S. earnings in a dramatic fashion.

So... what does all this mean for your money?

Despite all the tensions from the trade war, China is still one of the world's best-performing stock markets this year. Chinese stocks are up more than 15% from their early January bottom.

Plus, as I said, I believe we'll see some sort of resolution sooner rather than later. The two countries will eventually realize that a drawn-out trade war isn't good for either of them or the global economy.

I don't want that to happen to you. That's why it's important to act now.

Editor's note: China recently announced plans to move forward with a new stock exchange that Steve calls the "New Nasdaq." It could allow hundreds – or even thousands – of China's fast-growing tech companies to go public for the first time... potentially igniting China's version of the dot-com bubble. Steve prepared a special presentation to go over all the details. Watch it right here.