It's one of the most profitable things you can understand about the market...

Sometimes, traders are pouring their money into risky speculations. Other times, they're pulling that money out.

And by staying on the right side of these trends, you set yourself up for big gains.

Over the past month, the markets have wavered between "risk on" and "risk off" behavior.

Tech stocks and other particularly speculative names led the market higher for a couple years, then stalled out for the last quarter or so.

But the mood has changed... Speculation is in the air again. We know this because a few key areas of the market have all been soaring lately...

Look how the tech-heavy Nasdaq Composite Index has rocketed up through June and July... 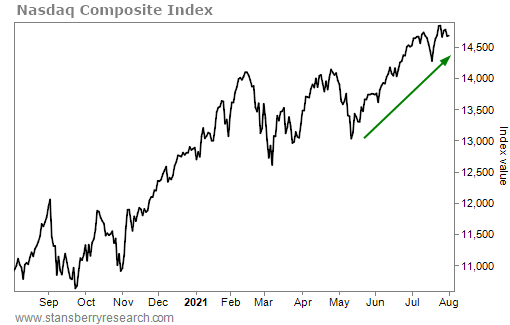 Electric-car darling Tesla (TSLA) has popped off its May lows (though it is still well below its January highs when it traded for an absurd 26 times sales)... 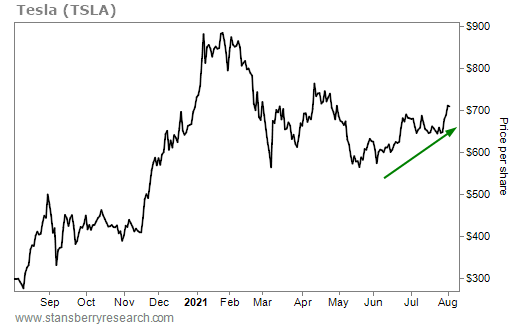 And the poster child of optimistic speculation, bitcoin, has been rallying too.

Some analysts will attribute part of the bitcoin rally to investors covering their short positions. But other news is sending the cryptocurrency higher... and that's the speculation that e-commerce giant Amazon (AMZN) may be venturing into cryptos soon.

An Amazon job posting, published online recently, was searching for a "Digital Currency and Blockchain Product Lead." It's just another major company getting into the space.

Earlier this year, bitcoin was cut in half. But it jumped 40% from its lows through the end of July. 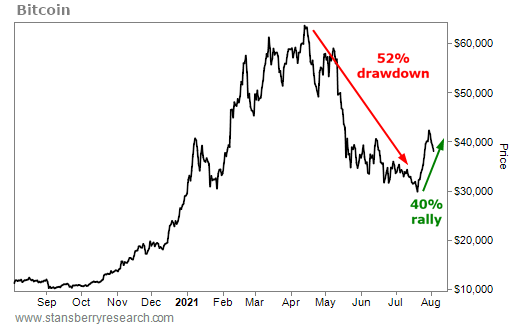 For now, growth and speculation looks like the order of the day. And as my colleague Steve has noted many times, that's what you should expect in a market Melt Up.

Folks are all hitting the buy button at the same time, causing stocks to rise... and the new highs attract new buyers. You'll often hear folks say that new highs lead to more new highs... and it's typically true. At least until there are no new buyers left.

This rally in growth and speculation tells me that there might be new highs ahead.

But it's important to stress that nothing goes in a straight line forever. Even if the markets end the year higher than where they are now, there will be plenty of bumps along the way.

We saw that a little more than two weeks ago, when the Dow Jones Industrial Average fell 700 points. In fact, the Dow fell by at least 200 points on four occasions last month.

So even though speculation is thick in the air, and it's tempting to go "all in," always remember there are going to be periods of volatility as this Melt Up continues.

By all means, continue to speculate and profit. But do so safely. Never put all your chips in one basket. There are still plenty of threats to this bull market... from high inflation readings to a new coronavirus variant to high market valuations.

Enjoy this Melt Up... but don't get complacent.

Editor's note: Doc says the rise in prices we're seeing lately – not just in stocks, but all over the economy – is hiding a deeper threat. The worst thing you can do is sit and do nothing... That's why he's issuing a "Final Wake-Up Call" for retirees today. He explains why we're heading down a dangerous financial path, and the four steps he believes every American should take right now. Get the full story here.

In the world of investing, a "sure thing" doesn't exist. Even your best ideas can go from major gains to double-digit losses. That's why it always makes sense to protect your downside with a simple strategy... Get the full story here: The Secret to Taking Profits Instead of a 70%-Plus Loss.

Even in a bull market, a pullback in your portfolio holdings is a part of investing. And when that happens, you need to be sure you have a plan in place... Read more in Steve's classic essay here: What to Do When Your Stock Is Crashing.

Today, we’re looking at a company with one of the world’s strongest brands…

Regular readers know that some companies stand a head and shoulders above others when it comes to their name. These companies develop high-quality brands that customers don’t mind paying more for… In fact, folks stay loyal to these brands through thick and thin. Today’s company is known around the world for its shoes and sports apparel…

Nike (NKE) is a $270 billion sports clothing, shoe, and accessories maker. Its brands include its namesake Nike shoe, along with Converse and Jordan. These well-known names continue to connect with customers and lead sales higher… In the latest quarter, Nike reported revenues of $12.3 billion, up 96% over the same period in 2020 (and up 21% compared with the same quarter in 2019). So as you can see, even the pandemic hasn’t quenched Nike’s popularity…

Over the past three years, NKE shares are up more than 115%. They recently hit a fresh all-time high. And as customers continue to be loyal to Nike’s sports shoes and products, that trend should continue… 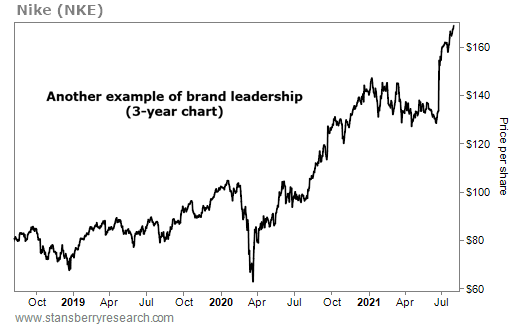