I laughed when I saw a black Tesla Model X parked in my neighbors' garage the other week.

Hey, don't get me wrong. I know it's a wonderful car.

It can go from 0 to 60 miles per hour in about four seconds. Its rear doors open up like falcon wings. And it can run 360 miles on a single full charge.

But I live in the Philippines... one of the most difficult places in the world to own an electric vehicle.

A quick search on Google turns up ZERO results for a Tesla charging station. And there are just a handful of independent charging stations in my metropolis of 20 million people.

That means my neighbors will have to make do with charging their Model X at home.

That's OK if they only intend to use it for short trips to the mall, occasional grocery runs, and bringing the kids to school.

But most people want to take trips out of town... or safely brave bumper-to-bumper traffic in Asian cities. Or they simply don't want to be bothered with having to plug in their car every single night. And for them, this is the last country where you want to drive around in an electric vehicle.

It's an entirely different story in a nearby country though. And as I'll share today, it's a big reason why that country is the shining example of the growth that's possible as electric vehicles take over...

Owning an electric vehicle is difficult in the Philippines – but in China, it's the exact opposite.

Right now, tens of thousands of Chinese consumers are buying up electric vehicles every month. For them, owning one has never been so easy and practical.

A lot of these folks wake up every morning, have breakfast... and start their cars remotely using their smartphones.

If they're ever in a hurry or running late for work, they can slide into the bus lane (something reserved for electric vehicles in China).

Most important, when their battery is running low, they can recharge at any of the 923,000 public charging outlets available throughout the country.

In other words, China is an electric-vehicle owner's paradise. It didn't just happen overnight though.

The Chinese government started to see the real potential of electric vehicles around 2009, when Tesla delivered its first small batch of the all-electric Roadster...

China realized that going electric could address two pressing problems: dependence on fossil fuels (which are mostly imported), and rampant air pollution caused by too many gasoline-powered cars on the road.

For China, fixing these problems has been a top priority. So it's doing everything it can to make sure electric vehicles succeed...

To promote the development of the industry, China's government announced a trial program in 2010. It provided manufacturer incentives of as much as $9,200 for every battery-powered car sold in the cities of Shanghai, Shenzhen, Hangzhou, Hefei, and Changchun.

That kicked off a rush among Chinese auto manufacturers to develop better, faster, and more affordable electric cars. In China today, these are known as new energy vehicles ("NEVs").

By 2015, there were more than 20 different models of NEVs selling in China. 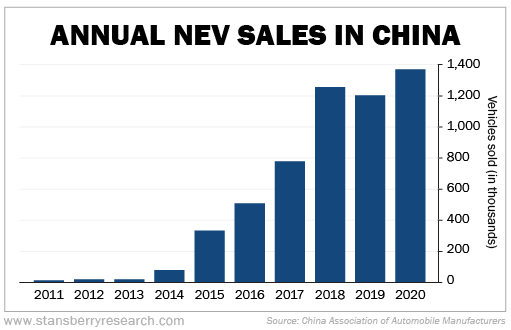 Last year, more than 1.36 million NEVs were sold in China. That solidified China's leading position in the global electric-vehicle market. The country now accounts for around 41% of the world's total annual sales.

It's not just about quantity, either. NEVs in China aren't glorified golf carts. These are stylish vehicles that give Tesla's bestselling luxury cars a run for their money.

China's NEVs come complete with a host of safety features, high-end stereo systems, digitized dashboards that can change colors depending on your mood, and Internet connectivity.

Simply put, China is now leading the world in electric vehicles. And if you're wondering how things might go in America, looking east is like looking into the future.

Tomorrow, I'll share how we got here... and what it means for China's electric-vehicle market in the years to come.

Electric vehicles aren't the only major growth opportunity in China. Travel is a huge industry for the country. And it's currently building airports faster than anywhere else in the world... Check out Brian's two-part series on Chinese air travel here and here.

"It seems like just about every asset had a banner year in 2020," Brian says. But the bull market in U.S. stocks will have to end eventually. That's why you'll need to look at other markets to find chances to profits... Read more here: This Trend Doesn't Scare Many Americans... But It Should.

Market Notes
THE COMPANY BEHIND THE SCENES OF SCIENTIFIC BREAKTHROUGHS

Today's company supplies the equipment that laboratories around the world can't do without...

Regular readers know we love investing in "picks and shovels" businesses. These companies provide the tools and services that support larger trends... which means that many businesses within their industry rely on their products. Today's company sells "picks and shovels" to support scientific research...

Agilent Technologies (A) sells everything doctors and researchers need to have stocked in their labs – from basic tools like syringes and vials to ultra-sensitive devices like microarray scanners. The company has clients in 110 countries, and with so many customers entrusting their work to its equipment, Agilent profits no matter which of them pulls off the next big breakthrough. In its most recent quarter, the company's sales topped $1.5 billion – an increase of 23% year over year.

As you can see, Agilent shares have steadily climbed over the past year. The stock is up more than 60% in that time frame, and it recently hit a fresh all-time high. As long as scientists need their labs well-supplied, they'll keep coming back to Agilent... 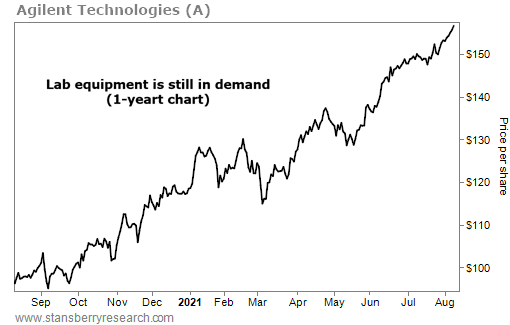