My good friends John and Kendra settled on their dream home 25 years ago...

It was "more house" than they should have bought at the time. But they couldn't resist.

While the first few years were tough on their budget, things couldn't have worked out any better for John and Kendra in the long run. They paid less than $400,000 for the property... and now, it's worth at least $2.5 million.

You see, this property is special because of its location. It's on a quiet, unusually wide, deep-water canal near the Intracoastal Waterway and the Atlantic Ocean. Ultra-rich yacht owners love this area... especially during the winter months, when they can escape the cold Northeast.

John and Kendra didn't fully appreciate this a quarter-century ago when they moved in, but they certainly do now... They own one of South Florida's "crown jewels."

Now, the thing is, crown jewels like these aren't just in real estate. They're also plentiful in the stock market – if you know what to look for.

By buying these gems and holding them for the long term, you have the opportunity to build massive wealth in the same way that John and Kendra have with their house.

So in today's essay, I want to help you learn how to uncover these crown jewels. Let's start at the top – by breaking down their two key qualities...

Enduring value typically comes from at least one of the following three factors...

Well-located waterfront property like John and Kendra own is special because it's very scarce. It has enduring value because you can only buy so much land in South Florida with quick access to the Intracoastal Waterway and the Atlantic Ocean.

Many public companies have also amassed impressive real estate holdings, although investors don't necessarily think of them as ways to put money to work in the space.

Copart has tens of thousands of vehicles for sale at any given time on its website. And maintaining a huge inventory of damaged vehicles requires a lot of land in strategic locations... The company currently owns more than 8,500 acres.

But what makes Copart special is how it turned its land holdings into a unique – and often underappreciated – competitive advantage. It's a unique physical asset...

You see, since large land tracts in or near major cities are scarce, their value has risen over time. And that translates into higher rental prices for the land.

Because Copart's competitors generally rent rather than own, they must pay increasingly higher rates to use the land. But because it acquired its land years ago at lower prices, Copart avoids this problem and earns industry-leading operating margins.

Sometimes, it's about more than just the land itself...

In the June issue of Extreme Value, my colleague Dan Ferris and I recommended a company that has amassed almost 20 times more land than Copart, much of it in fast-growing metro areas.

But this land is even more valuable than Copart's because it has special rights that are nearly impossible for competitors to replicate. The company leverages this tremendous advantage into something every business prizes – the ability to regularly raise prices.

In a similar way, the special right to sell products under a well-known, highly regarded brand is one of the greatest sources of enduring value ever created...

Iconic brands like Coca-Cola (KO), Quaker Oats, and Campbell Soup (CPB) have been around for more than a century. They provide a durable source of cash flow for their owners. Dominant brands typically get special privileges, too – like premium shelf space at top retailers.

One particularly valuable skill is the ability to acquire other companies successfully. By this, I mean that it can find the right companies at good prices... and then integrate them into the existing business in a way that adds value.

Many acquirers excel at one or the other. Few companies are exceptional at both sets.

These traits can all create enduring value. But in addition to enduring value, crown jewels often feature another critical attribute – optionality...

Think of this as something special that you don't necessarily count on, or even know about today... But in the future, it could become a very big deal.

When my friends John and Kendra bought their South Florida home 25 years ago, they were still a long way from retirement. Now that it's closer, they're looking at other places to live.

The good news is... they'll never have to sell their amazing waterfront property (and take a huge capital-gains-tax hit) to fund the move.

That's because the home-rental market has developed so much over the past decade due to operators like Airbnb, HomeAway, and other online rental companies. John and Kendra can easily rent their waterfront home for $15,000 per month in-season (December to April), then use part of that income to live comfortably somewhere else for the rest of the year.

That's the beauty of crown jewels...

They can change with the times in ways that are impossible to predict... and make smart, early investors a fortune in the process. This might be the best example...

One investor I know purchased $5,000 of Apple (AAPL) stock in the late 1990s, long before the iPhone was even on the drawing board. Today, that position is worth about $950,000... and provides the investor with $6,500 in annual dividend income.

Think about that... This investment is now generating more income each year than it originally cost the investor, largely thanks to a product that didn't even exist at the time!

Every long-term investor faces the same fundamental challenge... How do I boost the wealth-creating potential of my capital?

You can start by gradually building substantial positions in the market's crown jewels.

Editor's note: Mike and Dan have discovered a unique set of rules to finding market winners. And today, it's pointing to a stock that they believe could ultimately return 16.5 times your money. Coming out of the dot-com crash, this same stock surged more than 693%... And since the financial crisis of 2008, it has gone up another 479%. Get the full story here.

"Is any business safe from the pandemic response?" Dan Ferris writes. If you're worried about investing today – even in the market's best businesses – get his take on the outlook ahead right here.

Instead of owning great businesses over time, how would you like to gamble with your life savings, hoping for a quick win? That's what a guy named Henry Gribbohm did in 2013. And we can learn a lot more from his mistake than just avoiding the dangers of speculation... Read more here.

Regular DailyWealth readers know we’re always on the lookout for companies that “sell the basics.” These companies may not post exciting growth, but they deliver steady, reliable sales. And that translates to strong share performance. Today’s company is a perfect example…

Colgate-Palmolive (CL) is a $65 billion consumer-products giant. It boasts well-known brands like Colgate (toothpaste), Palmolive (dish cleaner), Ajax (household cleaner), and Speed Stick (deodorant). These staples keep people coming back for more, in good times and bad. And that has held true during the current recession. In the most recent quarter, Colgate-Palmolive’s organic sales (which exclude sales from recent acquisitions) rose 5.5%.

As you can see in today’s chart, CL shares have rebounded strongly. The stock is up 30% since its March low, and it recently hit a fresh all-time high. As long as people need basic household products, this stock should continue higher… 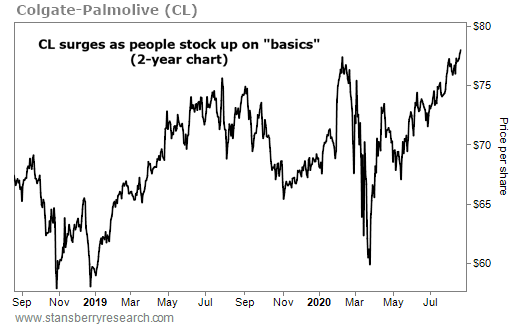