These Three Steps Will Give You the Courage to Be Contrarian
By Dr. David Eifrig
Wednesday, August 15, 2018

Being contrarian pays when you're an investor.

If nobody wants an asset, you can buy it cheap. If everybody wants it, it's expensive.

But as Michael Lewis, bestselling author of The Big Short and a former bond salesman for Salomon Brothers, puts it, "On Wall everybody says he's a contrarian, and nobody is."

Investors love to follow the herd. And most of the time, "fighting the trend" is difficult at best. If you immediately take the opposite side every time a stock gets overvalued or a sector looks oversold, you're going to go bust very quickly.

The past decade has shown this dramatically. Today, I'll show you why. I'll also share three basic rules for making smart contrarian investments – so you can avoid losing money on low-quality stocks...

Even at the times when a contrarian opinion is correct, most investors don't have the courage to make the trade.

Every investor professes a contrarian streak, but when watching a dropping market, they often say, "I know you're supposed to be greedy when others are fearful... but things are pretty scary right now."

If you had the guts to buy in March 2009 – with the S&P 500 Index trading around 12 times earnings... then you earned your contrarian merit badge.

But I hope you haven't had the contrarian itch since then. Most asset classes have risen steadily for the past nine years. Taking a contrarian perspective of the broad market and focusing on short-selling wouldn't have done much for you.

You would have had a few opportunities as trends reversed. You could have gotten out of oil stocks in early 2015... shorted blockchain stocks when bitcoin prices neared $20,000... or sold out of a few high-flying holdings like Valeant Pharmaceuticals (VRX) before they crashed. But in general, "trend following" ruled the decade.

This doesn't just apply to long versus short trades. It also applies to value versus growth...

Every study on stock market factors shows that, over time, buying low-priced stocks (as valued by either the price-to-earnings or price-to-book ratio) tends to outperform buying more expensive stocks. So finding overlooked bargains tends to be the better long-term strategy. But not this decade.

As you can see in the following chart, comparing the Russell 1000 Value and Growth indexes shows that value simply hasn't worked... For the past decade, it has paid to be a follower. And even if you wanted to make contrarian investments, you would have been hard-pressed to find one while the rising tide lifted all assets.

That's why you must understand the three rules we follow for contrarian investing. Buying something just because not necessarily pay off.

To be a successful contrarian, you need to...

Most of the time, stocks fall for a reason. You need to understand your investment well enough to know what that is... and have a good rationale for why it's an investor overreaction.

This doesn't mean just buying 20% below an . This means looking at measures of value, like the price-to-earnings ratio – and specifically, looking for significant, historically low valuations. That way, if you missed your contrarian opportunity the last time an asset was dirt-cheap, you'll know with conviction that you've got a second chance.

A dying, money-losing business – even at a cheap price – doesn't make a good investment. So if an entire sector is down (and you believe it's an overreaction), step in and buy the best operator in that sector.

With these rules, we can protect ourselves from getting sucked into a "value trap" (which is when a cheap stock really isn't a good deal, because you overlooked the good reasons it was cheap).

Plus, they'll make sure we earn the maximum returns for making a gutsy, contrarian bet.

Editor's note: Right now, Doc is showing readers how to take advantage of a little-known niche of the financial market. He calls this secret the "Forever Income Clause." Most Americans have never heard of this idea... But if you learn how it works, you could collect thousands of dollars in your investing account, month after month. Click here to learn more.

"A value trap is like quicksand for your money," Kim Iskyan writes. As he explains, buying cheap is usually good – but not always. Learn how four simple questions can help you avoid the bad apples right here: How to Tell If a Stock Is Cheap... Or If It's Just a Value Trap.

"The basic idea of finding what's cheap, hated, and in an uptrend works across most asset classes," Steve explains. Check out his rundown of how this works – plus one way to navigate growth and value during this bull market – right here: How to 'Call' the Markets Correctly.

Market Notes
THE AGE OF CHIPS AND PROCESSORS IS HERE

Today, we revisit one of the biggest trends in technology…

Cellphones and computers are now firmly established in our everyday lives. And that means semiconductors – the “chips” that power a wide range of electronics – are always in high demand. Big secular trends like this can lead to impressive gains for investors. For proof, we look at a strong contender in the semiconductor industry…

Advanced Micro Devices (AMD) makes chips and processors for desktop computers, laptops, and more. To keep up with demand for faster, better electronics, AMD just released a new computer processor. It’s the second-generation Ryzen Threadripper… And according to the company’s tests, it’s the most powerful desktop processor in the world. AMD also reported sales of nearly $1.8 billion in the most recent quarter, a 53% jump from the same period last year.

As you can see in the chart below, AMD is enjoying a major uptrend. Shares have risen more than 50% over the past year. As long as folks remain glued to their screens, this company should continue to thrive… 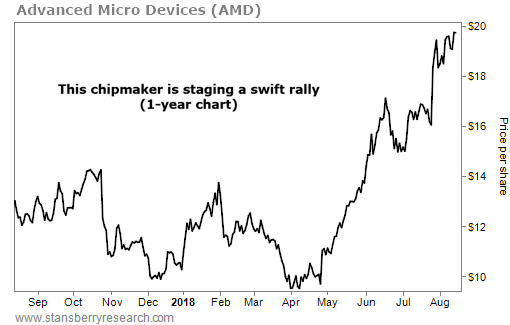