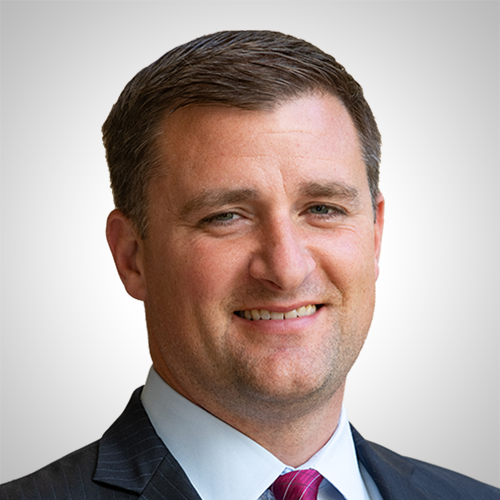 Lately, many stocks have been rallying off major support levels, particularly in the technology sector.

And this is leading to great trading opportunities.

Not everyone agrees, of course. Part of the debate is about the correlation between interest rates and their effect on certain parts of the market.

When it comes to the technology sector, higher interest rates have often resulted in lower stock prices... However, there is a historical precedent for tech stocks and interest rates to rise together. So we can't get too attached to thinking that tech stocks can't rally just because interest rates might go higher.

I won't get into the nuts and bolts of interest rates today. Instead, I'll cover two specific technology stocks that are moving higher...

The first stock I want to dive into is California software company Salesforce.com (CRM).

This stock topped last year around Labor Day while other stocks kept marching higher into the end of the year. But now, it looks to have formed a bottom... 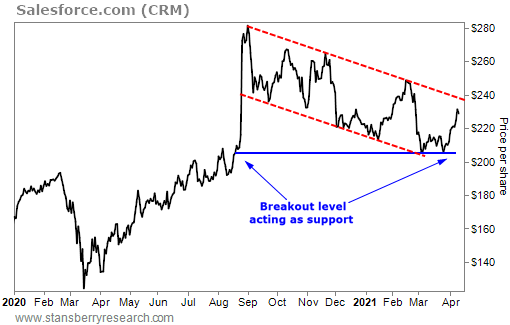 In technical analysis, "support" refers to a price level that an asset refuses to fall below for a period of time. In this case, support formed near the $200 level – right around the point where CRM broke out last August.

The rally didn't last too long. From its high last September, the stock has been in an overlapping, choppy pattern as marked in the red dashed lines.

But as technical analysis tells us, this type of price action is almost always the result of a correction and NOT a significant top in place. And so far, that support level has held, and the stock has moved higher.

Another high-flying tech stock that suffered a recent severe correction is security-software company Zscaler (ZS). Take a look at the chart below... 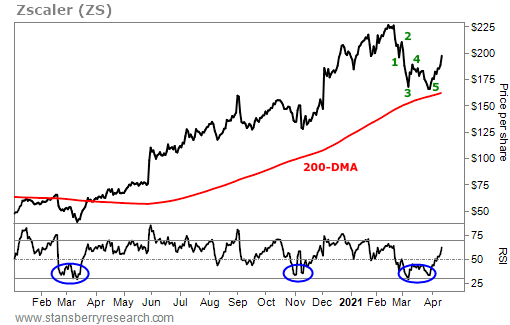 First, notice the red line. This is the 200-day moving average ("200-DMA"), which usually acts as important support or resistance (in this case, support). Secondly, you'll notice the green labels that mark a perfect "five waves" down.

In technical analysis, this is a classic Elliott Wave pattern. Five waves up or down like this mark the END of a move. So in this case – as I recently showed my Ten Stock Trader readers – it was clear that the move down was largely complete.

Also, let me draw your attention to the relative strength index ("RSI") at the bottom of the chart. This is a great way to see when a stock is oversold and due for a rally.

Note the blue circles – each time the RSI moved this low, it was a buying opportunity for ZS. And recently, the RSI hit this level once again.

Combine all three of these technical factors, and the stock should rally at a minimum back to test the $200 level, if not reach a new all-time high. We already captured part of that potential move in my Ten Stock Trader newsletter, locking in gains of 56% in less than a week.

The evidence continues to show more opportunities are popping up as big-time tech stocks hold important support levels. Make sure you're on board in this sector today.

Editor's note: Greg predicted both the crash of 2020 and the massive rally that followed. And if you'd followed his recommendations, you could have doubled your money eight different times last year... including a 256% gain in six days when the initial market decline began. Now, he's sharing a serious new warning for May 10. Watch his latest video to learn what he sees ahead.

Technical analysis isn't just about knowing why a certain stock will move. It's also about understanding investor behavior to figure out when a stock will move, and by how much... Read more here: Look Beyond Trendlines and Patterns to Profit in Any Market.

Fund managers are giving up on high-flying growth sectors like tech today. Instead, they're seeking refuge in value stocks. But history tells us that could be a huge mistake, and growth stocks could rally soon... Get the full story here: It's Time to Bet on Growth Stocks.

Today, we’re looking at a traditional retailer that has hopped on the e-commerce trend…

It’s no surprise that the past year has been tough for many stores. COVID-19 shutdowns have caused many shops to close their doors forever. But it also accelerated the ongoing Internet-shopping boom – and retailers that have taken advantage of this move online have seen incredible returns. Today’s company is a great example…

American Eagle Outfitters (AEO) is a $5 billion clothing retailer, operating nearly 1,100 stores across the globe under the American Eagle and Aerie brands. Like many retailers, COVID-19 was hard on American Eagle’s brick-and-mortar stores… In American Eagle locations, in-store revenue declined 20% in its most recent quarter… but the brand’s Internet sales increased 35%. The company’s total sales of $1.3 billion were nearly identical to this time last year.

As you can see, AEO shares have surged after bottoming last spring. They’ve more than quadrupled from their lows and just hit a new all-time high. As this online craze continues, retailers with strong e-commerce operations are reaping the rewards… 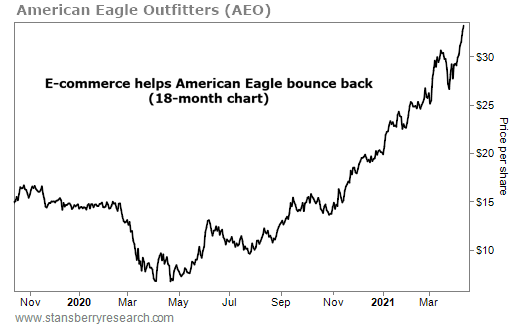