This Asset Will Crush Gold in the Precious Metals Rally
By Bill Shaw
Wednesday, August 28, 2019 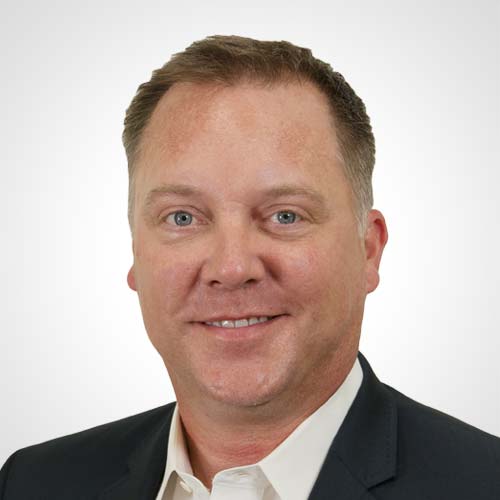 It was a good month for precious metals...

Meanwhile, another precious metal has played catch-up with gold. And while I expect the gold boom to continue, we could see more outperformance from here.

I'll explain all the details today. But first, I'll shed some light on how a few key trends are fueling today's rally... and why precious metals should continue to soar.

On August 5, China officially allowed its fixed currency exchange rate to move beyond the psychologically significant seven-to-one rate against the U.S. dollar for the first time since 2008.

Later that day, the U.S. Treasury officially labeled China as a "currency manipulator." The news put pressure on already tense U.S.-China trade negotiations and helped spark a 3% rout in the S&P 500 Index. Gold prices gained $25 on the day as investors fled to precious metals as a safe haven against volatility.

Then, last Friday, China slapped $75 billion in retaliatory tariffs on U.S. goods. Not to be outdone, President Trump fired back by increasing planned tariffs from 25% to 30%. It appears that both sides are prepared for a long fight.

Meanwhile, with nearly $17 trillion in government bonds trading with a negative yield, many investors no longer view gold's zero yield as a penalty. As trade tensions and volatility rise, it's no surprise that investors are flocking to gold in today's environment.

And with central banks around the world competing in a monetary race to the bottom, all signs point toward more upside for precious metals going forward...

As I said, the Fed cut interest rates from 2.5% to 2.25% last month. This marked the central bank's first rate cut since it took interest rates to effectively zero in December 2008.

Not only that, but the five-year government bonds from 12 of the 20 countries that we monitor in Stansberry Gold & Silver Investor currently trade with negative interest rates. That's up from 11 countries in July.

And incredibly, for the first time since our letter launched in 2016, the average rate of these bonds has gone negative... falling from 0.22% in July to -0.03% today. 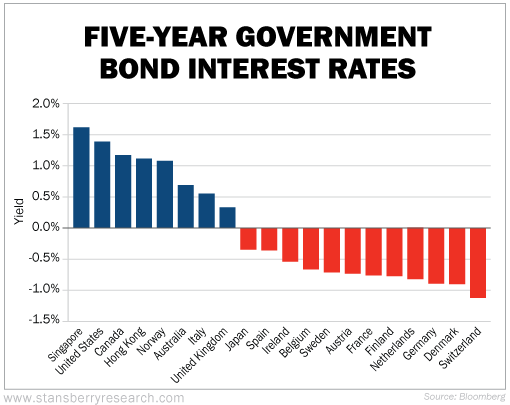 As global interest rates go negative, investors suffer less opportunity cost from gold's zero yield. This only brightens the appeal of gold as a store of value.

We're already starting to see this appeal in action. The next table shows the price of gold over the past year measured in terms of five major world currencies... Notice that gold has gained at least 20% against all major currencies.

Gold should continue its rally as these trends play out. However, don't overlook silver today...

The gold-to-silver ratio started declining from extreme levels last month. After reaching a multidecade high above 93 in July, it dropped below 90 as we moved into August.

Today, the ratio sits at around 85. That means silver is starting to outperform gold... 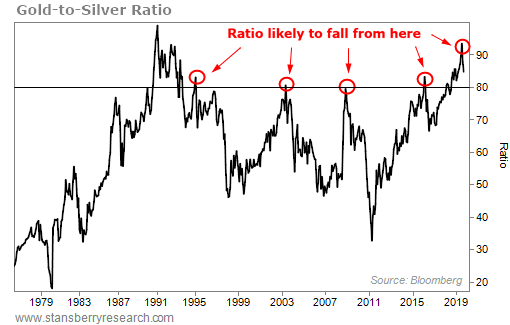 In recent decades, you can see the ratio dropped significantly after hitting levels like we're seeing today. Going forward, I expect silver to keep outperforming gold, bringing the ratio down further.

Now is a great time to own precious metals. If you owned gold or gold miners last month, those assets helped shield your portfolio against the roughly 3% loss in the broader U.S. stock market. Gold continues to be an excellent "chaos hedge."

Meanwhile, silver is poised for impressive outperformance from here.

As always, take a patient and disciplined buying approach... Start with a partial position size, and use down days in the market to add to your positions. With today's investing backdrop, you want to put some money in precious metals right now.

Editor's note: Investors are pouring money into precious metals... And to make the biggest profits, you need to own the best investments now. That's where gold investor John Doody comes in. Over the past 18 years, his gold-stock strategy has outperformed gold, gold funds, and even the S&P 500. Now, for a short time, he's offering a special deal on his research... and throwing in access to his top silver stocks, absolutely free. Get the details here.

"Demand for gold is timeless, but is bullion really the best way to profit?" John Doody asks. There's an easier way for investors to take advantage of the rally in gold prices... Learn more here.

"This frenzy has spread around the world," Bill says. "It's a crucial reminder of why you should own gold in your portfolio today." Get the details about a recent shift in gold – and what it means for the metal in the months ahead – right here: This Gold 'Frenzy' Has Reached a 52-Year Extreme.

Today’s chart shows a victim of the smartphone revolution…

According to the Pew Research Center, more than 80% of Americans have smartphones. Many folks use them to take crystal-clear photos, which they can share instantly with friends, family, and the rest of the world. It’s easy and fun – but it’s bad news for today’s company…

Canon (CAJ) is $35 billion electronics maker. It sells printers, copiers, medical devices… and digital cameras. In the second quarter of 2007, Canon made a fat 26% profit on its digital-camera business – and then, Apple (AAPL) introduced the iPhone. Now, sharing photos no longer means hooking up a bulky camera to an even bulkier computer. Since the iPhone’s debut, the profit margin on Canon’s cameras has dwindled to 6%… And the segment’s revenues have fallen 31%.

Likewise, CAJ shares hit all-time highs in 2007… And since then, they’ve fallen more than 50% to new multiyear lows. The smartphone revolution made some electronics companies rich… But not everyone got on board… 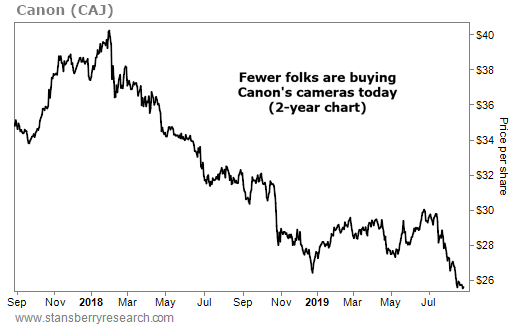