We have a habit of telling ourselves that we're living in exceptional times...

No one has ever seen this before. They'll write history books about it. And I'll have witnessed it firsthand.

Even in bad times, those kinds of thoughts can feel good. And sometimes they're true... But that's rare. Unique moments in history are the exception, not the rule.

We're living through a painful bear market today. The fact is, though, what we're seeing isn't that special.

So today, we'll look at the history of bear markets. And through this breakdown, we'll see just how bad things could get this time around.

History lessons aren't always fun... But they're darn useful. That's why we want to study up on bear markets right now.

We've had 19 of them since the S&P 500 Index began in 1928. That's one every five years. And the best way to know how bad they can get is to know what's going on in the economy.

Simply put, bear markets look a lot different when the economy is in recession.

To see this, let's first look at bear markets that have happened without a recession. Those have only happened six times in the history of the index. Take a look... 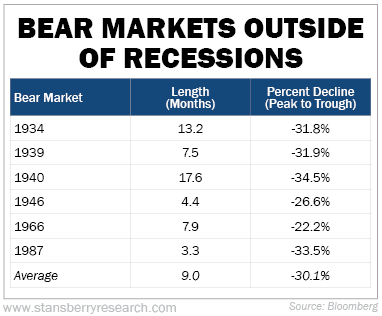 You might not expect that we could get a major drop in stocks without an economic downturn. But history shows it's completely possible.

Heck, even Black Monday – where stocks dropped 20% in a day – happened without a recession. And as we know from this year, any 20%-plus stock market decline is tough to swallow.

Still, bear markets tend to be longer and more painful when the economy is in the dumps. Take a look... 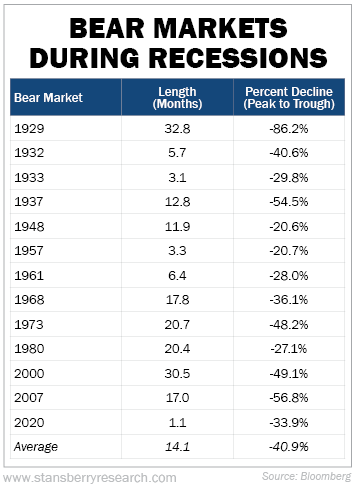 The first thing you'll notice is that twice as many of these declines happen with a recession than without one. They're also nearly 60% longer, on average. And the overall decline is nearly 11 percentage points worse.

This relationship makes sense. The stock market isn't the economy... But there's a clear link between the two. So it's hard for stocks to do well when the economy struggles.

So where are we today?

This bear market is now more than 10 months old. And the max decline is 25% so far.

That means we're right in line with "normal" if we don't get a recession... But if a recession does show up, things will likely still get worse from here.

Tomorrow, I'll share two indicators that give us a good idea of where the economy will head next...

"Markets tend to flush out and find their bottom faster than you'd think," Dr. David Eifrig writes. Two insights can help you manage your emotions through the pain – while preparing you for the eventual upside in stocks... Read more here: Get Up When the Bear Market Knocks You Down.

"Fearful sentiment readings tend to pile up near market bottoms – right before stocks soar," Brett explains. And while we're likely not through this bear market yet, that's exactly what we're seeing lately... Learn more here: Investors Have Only Been More Bearish Once This Century.

Recent Articles
You Can't Afford to Ignore Foreign Stocks
By Sean Michael Cummings
The Dot-Com Bubble Might Be Repeating Itself... With Different Players
By Joel Litman
The Defense Sector Could Boost One Battered Tech Stock
By Rob Spivey
Everyone Hates Housing... But Don't Expect a Crash
By Brett Eversole
Don't Buy New and Exciting... Buy Boring and Difficult
By Dr. David Eifrig