This Company's Dreams Don't Live Up to Reality
By Marc Gerstein
Friday, July 1, 2022

Editor's note: Investors got used to big promises and big dreams from companies during the bull market. Now, volatility is back – and it's time to separate dreams from reality. Today, we're sharing an essay from Marc Gerstein, director of research at our corporate affiliate Chaikin Analytics. Read on for one company to stay away from right now...

Also, our offices and the markets are closed on Monday in observance of Independence Day. Our next issue of DailyWealth will publish on Tuesday, after the Weekend Edition. Enjoy the holiday!

This company talks like it's a savior of the global supply chain...

It calls itself a "technology platform that uses a massive network, leading technology, operational excellence and product expertise to power movement from point A to point B."

Imagine a tech platform that could help unload the waiting ships in the world's harbors... or help airplanes get to where they're needed most. It could help rail traffic move more efficiently. Perhaps it could even help drivers steer clear of traffic jams.

This language comes from Uber Technologies (UBER). It's part of the company's annual 10-K filing with the U.S. Securities and Exchange Commission.

In a 10-K, a company tells investors about its current business – and its dreams for the future. That last part is important. Uber might dream of doing all sorts of things. But at least for now, it's known as a simple taxi service.

Now, to be fair, Uber isn't lying or exaggerating. It is doing exactly what it says in its 10-K. And it is trying to become a food-delivery and freight-shipping powerhouse.

But the thing is... that might be why Uber is losing so much money.

And that brings us to a valuable lesson for investors...

You see, Uber's dreams involve a lot of capital and expenses. But not everything it does produces much revenue...

In 2021, Uber reported about $1.6 billion in earnings before interest, taxes, depreciation, and amortization from "mobility." That's the name the company gives its core, taxi-like business.

But in the same year, it lost $489 million on food delivery, freight, and "all other" businesses. And it burned almost $1.9 billion on general and administrative costs, as well as research and development.

In other words, Uber's core business could likely be profitable if it didn't dream so big.

But management seems mesmerized by PowerPoint jockeys showing a path to world domination. And investors aren't falling in love with those types of dreams today...

Uber got caught up in the market's shift away from so-called "growth stocks" in recent months. The stock is down roughly 65% from its February 2021 peak.

Of course, Uber isn't the only company with grand visions. And sometimes, these plans do work...

Amazon (AMZN), for example, started out by selling books online. Now, the company sells everything. And it makes even more money through its "cloud" services.

But unfortunately, grand visions backfire all too often...

You might remember Internet-access company America Online (or "AOL"). It tried to take over media giant Time Warner in the early 2000s... and failed. That deal is now known as one of the worst mergers of all time.

The two companies didn't achieve their dreams of creating a media and Internet empire. And as a result, AOL's investors lost big.

But right now, our Power Gauge system at Chaikin Analytics currently ranks Uber as "very bearish." It's warning investors to watch from the sidelines as the company tries to fulfill its big dreams. 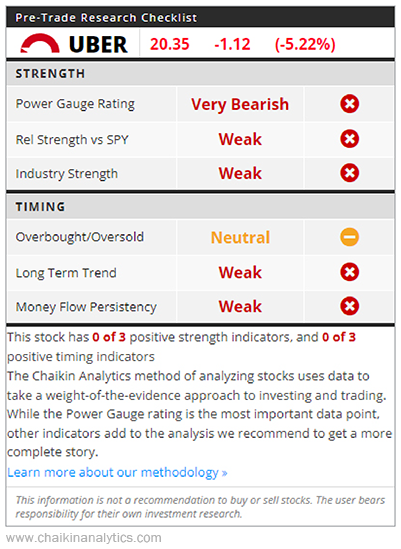 This is what it looks like when corporate dream-building is out of touch with reality.

Fortunately, as investors, we don't need to risk our hard-earned wealth...

Instead, with companies like these, it's best to wait and see how the next chapter of the story plays out. Patience makes for dull conversation. But in the end, our portfolios will appreciate it.

Editor's note: Marc's colleague Marc Chaikin just went public with an urgent market update. The last time he went on camera, he issued a sell warning for DoorDash – before the stock crashed more than 40%. Now, he's sharing the name and ticker of the next beloved stock headed for destruction... And he says there's a good chance you own it. Learn more here.

If you want to maximize your chance of success as an individual investor, it's crucial to have the best tools at your disposal. That's why Marc Chaikin created a unique system that can predict the performance of entire sectors... Learn more here.

The "smart money" always seems to be one step ahead. So in an effort to even out the playing field for individual investors, Marc Chaikin created an incredible system to help folks keep up with the pros... Read more here: The Four Main 'Ingredients' to My Life's Work.