This Could Explain Why Gold Is Suddenly Soaring Again
By Justin Brill
Saturday, February 23, 2019

We just saw a big bullish sign for gold...

In short, over the past several months, the precious metal has been moving higher despite a strong rally in the U.S. dollar.

This is unusual. Most of the time, gold and the dollar trade inversely. So seeing gold rally in spite of this headwind suggests this rally could have legs...

But this isn't the only sign that this move higher is different from others we've seen recently...

As you can see in the following chart, that's exactly what has happened... 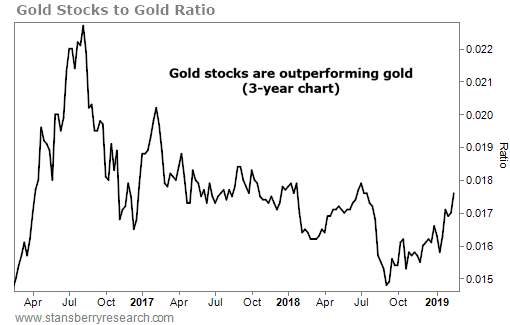 Since making a new multiyear low last fall, this ratio has moved sharply higher. And it is now just shy of making its first "higher high" in nearly three years.

This is a big deal. It hasn't happened since early 2016. Back then, gold moved roughly 25% higher over the next several months, while gold stocks – as tracked by the VanEck Vectors Gold Miners Fund (GDX) – surged nearly 140%.

You see, history shows gold stocks also tend to dramatically outperform the broad stock market during gold bull markets. And as the next chart shows, the ratio of gold stocks to the S&P 500 has already made a higher high for the first time since early 2016... 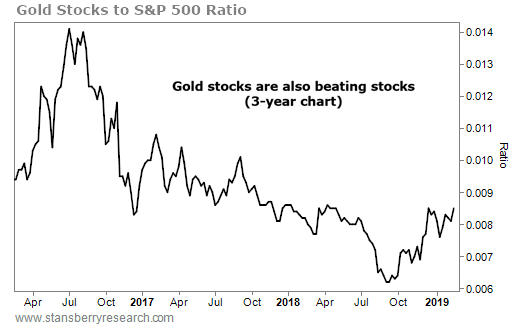 After the big rally over the past few months, we wouldn't be surprised to see gold take a "breather" soon. But it's looking more and more likely that a new gold bull market is already underway.

Now, we can't say for certain what's driving this move in gold...

But the similarities to the last big breakout in 2016 are striking.

That rally began as the world's central banks suddenly became more "dovish," following a China-led slowdown in the global economy.

Here in the U.S., the Federal Reserve suddenly halted its new plan to raise interest rates. The central banks in Europe and Japan went even further, doubling down on quantitative easing ("QE") and pushing short-term interest rates deep into negative territory. And the Chinese government unleashed unprecedented stimulus as well.

Today, we're once again seeing clear signs of a China-led slowdown. The Fed has suddenly halted its rate-hike cycle. Europe and Japan are discussing additional easing. And China is again trying to boost its economy with a flood of "easy money."

The big difference this time is that it's happening despite a much higher baseline of stimulus.

Outside of the Fed, none of the world's major central banks even attempted to pull back these efforts over the past three years... which means they'll have to resort to even more extreme measures if they hope to keep this global debt bubble inflated awhile longer.

Though we can only guess what they'll try next, we're willing to bet it won't be good for savers.

But this isn't the only concern gold could be reacting to today...

If you even casually follow the news, you've likely noticed a radical new socialist movement has suddenly taken hold in this country.

There may be no better face of this movement than freshman Congresswoman Alexandria Ocasio-Cortez. The 29-year-old former Bernie Sanders activist trounced 10-term Democratic incumbent Joe Crowley to win New York's 14th district last year. And she did so on a radical platform that included just about every socialist scheme imaginable, including free health care and college for all... subsidized housing for all... and a guaranteed federal job for every American.

More recently, she went even further... proposing a "Green New Deal," which ultimately aims to reduce America's carbon emissions to zero through – no joke – "getting rid of farting cows and airplanes," among other measures. It also promised "economic security" – aka handouts – for all Americans who are "unable or unwilling to work." (We should note that she later removed this particular phrasing after a public backlash.)

However, "AOC" (as she has become known) is not alone. A number of other notable politicians are suddenly proposing similarly disastrous policies. And most frightening of all, a huge and growing number of Americans are in favor of them.

This should come as no surprise to longtime readers...

Stansberry Research founder Porter Stansberry predicted this trend long before anyone even knew who AOC was. As he wrote in the October 28, 2017 DailyWealth...

Dear subscribers... what do you think happens next? What happens when the least educated, least "vested," and most violent members of your society... also make up the largest demographic block... and have the largest debts (relative to income) with zero ability to pay these debts back or discharge them through bankruptcy?

When you watch the news and you see people rioting about race in Charlottesville, Virginia... when you see the inner cities burning in Baltimore... when you see more and more radicalized politics – like resurgent neo-Nazi groups, the rise of Black Lives Matter protests, and college students embracing violence to protest any conservative speaker – what you're really seeing is [something else].

Of course, what these socialist politicians don't explain is how these programs will be paid for...

Yes, these folks all support massive tax increases on the wealthy. However, an honest look at history shows the real burden of punitive tax rates inevitably falls most heavily on the middle and upper middle classes.

These folks earn too much to benefit from socialist handouts, yet don't have the resources to minimize or avoid high taxes like the super-rich.

But direct confiscation of your income and savings isn't even the biggest risk you face...

You see, what none of these politicians will admit is that even massive tax increases won't come close to paying for these promises. They will also require a complete "reset" of our entire financial system... a reset that again will fall squarely on the shoulders of the middle class. Tens of millions of hardworking, everyday Americans could see their savings cut in half... or worse, virtually overnight.

Porter has written a book – titled The American Jubilee – detailing exactly what is driving this trend... and more important, exactly what you can do to protect yourself from its inevitable consequences.

If you haven't read it yet, click here to learn how you can get your own hardback copy for just $5 right now.

Editor's note: If you care about your health... your wealth... your family... and your future... it's critical for you to understand what's really happening today and what is most likely coming next. If Porter is even half right, it could radically change day-to-day life in America in ways most of us can't even imagine. Click here to learn more now.