And as has often been the case of late, trade tensions largely took the blame.

In particular, fears are growing that the ongoing "trade war" between the U.S. and China could derail the global economy. And there may be no greater evidence of this than the recent performance in copper.

As longtime DailyWealth readers know, the industrial metal is often referred to as "Dr. Copper." Because copper is used in everything from computers and cars to plumbing and power lines, its price tends to be a reliable leading indicator of global economic health.

In short, rising copper prices suggest strong demand for the metal and a growing global economy, while falling prices suggest a slowdown. And as you can see below, after reaching a new four-year high in June, copper has fallen more than 20% over the past 10 weeks... 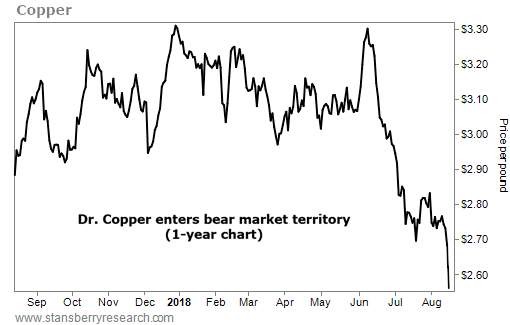 The decline accelerated this week following new data on Tuesday showing one specific measure of Chinese economic growth had slowed to its lowest level in nearly two decades.

But these worries aren't limited to China alone...

Investors have also suddenly "woken up" to the problems in Turkey, which is teetering on the brink of a full-blown currency crisis. And here, too, rising trade tensions threaten to make a bad situation even worse.

Earlier this week, President Donald Trump introduced sanctions on Turkey in response to its government's imprisonment of a U.S. pastor. On Wednesday, Turkey's President Recep Tayyip Erdogan announced he was raising tariffs on a number of U.S. imports in response. As the Wall Street Journal reported...

Turkish authorities said they raised tariffs on U.S. goods including alcoholic beverages, passenger cars, tobacco, cosmetics, rice and coal. That comes the day after Mr. Erdogan said Turkey would boycott U.S. electronic goods, including Apple Inc.'s iPhone, though he didn't say how that would be enforced.

Turkey's Vice President Fuat Oktay said the tariffs had been raised as a "response to the U.S. administration's deliberate attacks on our economy."

Although the U.S. tariffs have largely been offset by the drop in the lira, the tit-for-tat escalation has raised concerns of a full-blown trade war.

While the impetus for this skirmish is different than with China, the fears are similar. As Oliver Nugent, commodities strategist for financial services firm put it in the Journal...

It's all one story. Continued macro concerns over trade have now added Turkey into the mix, and that adds to the premise of synchronized global growth being steadily undermined.

U.S. markets have held up relatively well compared to the rest of the world so far. But if these trade wars continue to grow, this is unlikely to continue for long. As we noted in the July 3 Digest...

Even if you support the president's hard stance on trade – and believe he will ultimately succeed in balancing the U.S. trade deficit and bringing jobs back to America – it could be years before any of these potential benefits are seen. But the immediate implications are overwhelmingly negative.

Many consumer prices will rise, perhaps substantially. The U.S. economy will slow. Jobs will disappear. This isn't fearmongering. It simply can't be any other way...

Trade restrictions raise the cost of goods and services. Producers and consumers must spend more for the same items. The additional money spent on these items is money that otherwise would have been saved, invested, or spent on something else. Some industries and workers may benefit at the expense of others, but we all end up worse off overall.

And if you believe any of this will be good for the stock and bond markets, you're likely to be extremely disappointed.

Of course, a global trade war is just one of the risks to this long bull market in stocks...

Whether it's the unprecedented excesses in the corporate and consumer debt markets... rising interest rates... or the flattening yield curve, there are plenty of reasons to be concerned about your investments.

Now, as we've discussed, this does not mean we recommend selling all your stocks and turning bearish today.

Our colleague Steve Sjuggerud may well be right... The "" in stocks could run for another year or more before it finally ends. Given his remarkable track record "calling" this bull market to date, we certainly wouldn't bet against him.

But even Steve has warned that when the bull market does finally end, a devastating bear market – a "Melt Down" – is likely to follow. At best, the next several years are likely to be incredibly difficult for most investors. Many could be wiped out.

If you joined us for our special event earlier this week, you know that you don't have to be one of them...

As Stansberry Research founder Porter Stansberry explained during the event, there are two simple principles that are likely to separate the relatively few investors who successfully navigate this and the vast majority who suffer needlessly.

These are proper diversification and flexibility.

First, you must allocate your portfolio sensibly, not only across individual positions but across various asset classes. If you have too much of your portfolio in any individual stocks, or simply too much in stocks in general, you're taking huge risks with your money.

Second, you must be flexible... You must be willing to adjust your allocations – and even your investment strategies – as market conditions change. Naturally, most assets that do well during the final months of the bull market are unlikely to continue to do well when it ends. Likewise, strategies that are less than ideal in today's market environment – such as buying distressed corporate bonds or selling naked put options – can be incredibly lucrative during volatile bear markets.

If you need more guidance on how to do this, there's no better way to educate yourself than by becoming a Stansberry Alliance member...

As an Alliance member, you'll get lifetime access to all 19 of our different research services, as well as to any and all new services we publish in the future. There is simply no better way to use our research to become a better investor.

However, given its cost of $25,000, we understand that not everyone is in a position to become a Stansberry Alliance member today. That's why we were thrilled to announce the launch of our newly upgraded Stansberry Choice program this week.

The premise of our Stansberry Choice program is simple...

For a significantly lower one-time cost, you can receive lifetime access to any five Stansberry Research services of your choice (excluding our elite Stansberry Venture services). Better yet, you can change any or all of those five services as market conditions change – or for any you'd like – for a small additional fee. And you'll get a full 30 days of unrestricted access to all of our services (again, excluding Stansberry Venture) to see exactly which services are best suited to your needs.

Editor's note: Right now, we're giving you the chance to sample almost everything we publish for a full 30 days – without having to pay anything near the $25,000 it takes to join our Stansberry Alliance. Plus, you can save tens of thousands of dollars in annual subscription fees over the next few years. But you need to act fast... This offer expires tonight at midnight. Learn more here.