Editor's note: In today's Weekend Edition, we're breaking from our usual fare to share an important message from Austin Root, editor of American Moonshots. In this essay, he details one financial concept that could change the way you grow your long-term wealth...

He once called compound interest "the most powerful force in the universe." As he went on to say...

Compound interest is the eighth wonder of the world. He who understands it, earns it. He who doesn't, pays it.

This might surprise you. After all, this isn't anything so impressive as the theory of relativity.

But this deceptively simple idea has a secret ingredient. It's one that most investors don't pay enough attention to – and it's crucial to building generational wealth.

So if you think you're already benefiting from the power of compound interest, read on... because you might be missing this key idea.

To start with the basics... compound interest is the concept of reinvesting your profits so that your interest can earn interest.

This differs from "simple interest," in which you pull out your profits each year and earn interest only on the original principal. And as you'll see in the following example, compound interest is far more powerful for wealth-building.

Both investors put $1,000 in an investment that, for the sake of round numbers, pays a 20% annual dividend. Each year, Mr. Simple cashes out the dividend and puts it under his mattress, while reinvesting the original $1,000. 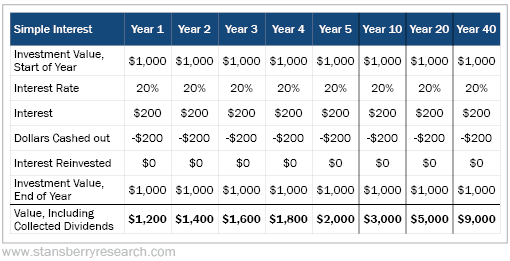 Go out even further, and you'll begin to see the true power of long-term compound interest. As you can see from the following table, 40 years in, Mrs. Compounding's $1,000 initial investment is worth more than $1.4 million... 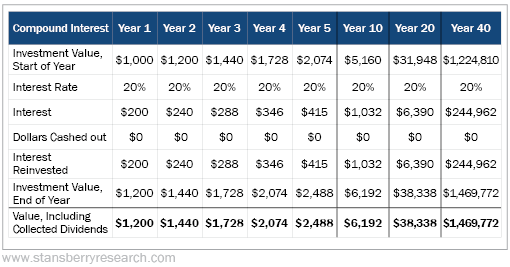 But it's important to note that the power of compounding isn't just about holding an investment for a long time...

It's also about owning an investment that's growing. The faster the growth, the bigger the compounding upside.

Let's revisit the example above, but with half the growth this time – or an interest rate of 10%.

In other words, the power of compounding works best with higher rates of growth and longer periods of time.

To successfully build generational wealth, you need to pour your money into the right investments – companies that are still small but have room to run. This makes sense for a couple reasons...

First, if you buy before a company is well-known and is early in its success, you're likely to get a better deal on the shares than if you were to buy it later... Plus, the company has more success ahead of it instead of behind it.

Second, every dollar of growth matters a lot more to a small company than a large one. For example, consider two popular lifestyle-brand companies, Nike (NKE) and Yeti (YETI). If Nike grows sales by $1 billion this year, that represents less than 3% growth. But if Yeti grows by $1 billion in 2020, that represents growth of more than 110%.

A couple years ago, Forbes magazine conducted a study on the best-performing stocks from 1980 through 2017. Not surprisingly, legendary investor Warren Buffett's holding company – Berkshire Hathaway – was on the list. After all, Berkshire has been called "the greatest stock market miracle of our time."

Still, you may be surprised to find out that Berkshire ranked only 15th on this list. Fourteen other companies performed better, and some – like discount clothing retailer TJX (TJX) – performed a lot better.

These 14 "Berkshire-beaters" came from multiple industries and distinct parts of the economy...

But 12 of the 14 companies did have one important thing in common: They were tiny when they began their historic runs higher.

The successful combination of all of the above is the driving force behind Stansberry's American Moonshots newsletter. We seek to identify world-class businesses (like Berkshire)... that are growing fast (to harness the power of compounding)... and buy into them early on while they're still small (like the Berkshire-beaters).

This is the secret you must know about building wealth over time.

If you're going to compound your wealth at a higher rate, your portfolio should have a place for stocks with "moonshot" potential... tiny companies that can turn a small stake into a life-changing fortune.

These are fast-growing, world-class businesses with thick profit margins, capital-efficient operating models, and sturdy balance sheets... the kinds of companies that should help you outperform over the long haul.

A word of caution: Remember, small stocks are likely to be more volatile than larger stocks. Some could fall by a lot more than the overall market in a broad sell-off. That's why no matter how well our recommendations do, American Moonshots is intended to represent just a portion of your investment portfolio – likely no more than 20%.

The beauty of this strategy is that even a small investment in moonshot opportunities can potentially lead to immense profits. As we've seen, it could make all the difference to your returns.

So put this growth secret to work today. It's the best way to harness the astonishing power of compound interest... and come away with true generational wealth.

Editor's note: The last phase of the Melt Up is happening now... And there couldn't be a better time to invest in tomorrow's blue chips. Austin recently released his 2020 American Moonshots portfolio, with 12 stocks that could deliver astronomical returns over time. And on March 4, one of them could jump 70% – essentially overnight – thanks to a big announcement... Click here to learn more.