This Is Like Sitting in on Private Board Meetings
By Marc Chaikin
Thursday, May 27, 2021

Information leaks... The "smart money" buys ahead of major announcements... And analysts at the biggest investment banks have unprecedented access to what's happening.

That's just how the world works. There's no getting around it.

Now, don't get me wrong... I'm not saying the reign of the "insiders club" is the way it should be. But it's the system we have.

The U.S. Securities and Exchange Commission has done a lot to clean things up over the years... But the investing world remains far from perfect.

That's why, early in my career, I developed an indicator to track the smart money. It's called "Chaikin Money Flow." And today, I'll share a bit about this powerful tool...

I developed my proprietary Chaikin Money Flow indicator way back in 1982. And to be honest, I'm amazed that it works as well as it does nearly 40 years later.

Obviously, I believed it would work when I built it. But what I mean is... I didn't realize the tool would soon become such a major "stock analysis cheat code."

You see, the Chaikin Money Flow works so well that it's used by hedge funds and billionaire investors. It's even built into the Bloomberg Terminal... And Bloomberg's biggest competitor (Thomson Reuters) uses the indicator, too.

This tool focuses on what I call "accumulation."

The concept is easy to understand... We want to know what the "smart money" is doing. "Accumulation" is simply the word for that. And as an investing tool, it works better than you might imagine.

Knowing what hedge funds and billionaires are doing with their money is like sitting in on private board meetings. This was made incredibly clear to me around 1989...

The company had released "New Coke" in 1985. As you might remember, the wackos in management tinkered with Coke's formula to try to make it more appealing. They basically force-fed it to consumers.

But of course... the public didn't really want New Coke.

The whole thing bombed. Within three months, Coca-Cola went back to its original formula. And the event went on to become one of modern history's most famous marketing disasters.

Well, in the late 1980s, I noticed something odd in my analysis... Coke was accumulating money behind it. And importantly, the accumulation was persistent.

I learned early on, persistency matters... You don't open a position of 23 million shares overnight, after all.

That's how many Coca-Cola shares legendary investor Warren Buffett bought when he established a position through his holding company Berkshire Hathaway (BRK-B). And I spotted that persistent accumulation by using the tools I had developed in my career.

It was an amazing feeling... I had uncovered Buffett's massive position before it became public, just by watching as a ho-hum stock accumulated cash behind it.

Coca-Cola went on to become one of the best-performing stocks of the next decade... It returned around 27% per year over that span, roughly doubling the overall market.

Simply put, using the Chaikin Money Flow can help you track the smart money in the market. It's like sitting in on a private board meeting. And it's a tool that helps level the playing field with Wall Street.

This tool also helped me catch the biggest stock story of 2021... months before it became a headline. I'll share those details tomorrow.

P.S. The Chaikin Money Flow is a key part of my Power Gauge model... which allows you to punch in any ticker and quickly get a full report, including a rating from "very bearish" to "very bullish." This tool truly levels the playing field between individual investors and Wall Street. And on Tuesday night, I hosted a major event to share the full details. If you missed it, you can still watch the replay right here.

Marc knows the markets as well as anybody. That's why, in the wake of the 2008 financial crisis, he developed powerful tools to help everyday investors get a leg up on Wall Street... Check out his two-part essay here and here.

Knowing when to sell a falling stock is just as important as knowing when to buy. Learn more about this real-life example of a simple investment tool that could have saved investors from massive losses here: The Simplest Way to Avoid Investment Catastrophe.

Market Notes
ANOTHER WINNER FROM THE RED-HOT HOUSING MARKET

As regular readers know, there’s a shortage of U.S. homes. And one of the best ways to get in on this market is through real estate investment trusts (REITs). These are “landlord” companies that own and operate properties like apartment buildings, warehouses, and shopping centers. And they’re required to pay out 90% of their income to shareholders. Today, we’re looking at a REIT that specializes in single-family homes…

Invitation Homes (INVH) owns about 80,000 well-maintained houses in in-demand neighborhoods – mainly in Florida and the Western U.S., where lots of folks want to move now. With a strong presence in the country’s prominent housing markets and lots of housing demand, just 1.4% of Invitation Homes’ properties were unoccupied in the most recent quarter… a record low.

INVH shares are up nearly 40% over the past year, and they just hit a fresh all-time high. As long as the housing market remains hot, this landlord’s homes will keep finding tenants… 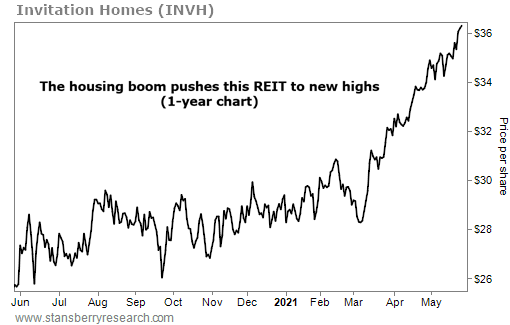