This Is What Happens When Analysts Become Ostriches
By Pete Carmasino
Friday, July 8, 2022

Editor's note: The right system can give you an edge over other investors – and help you ignore the "noise." That's why our friend Marc Chaikin built the Power Gauge. At our corporate affiliate Chaikin Analytics, they use this tool to unearth danger spots in the market (and a lot more). Today, Marc's system says to avoid two plummeting sectors, despite what the Wall Street analysts say...

With so many "buy" ratings today, it's like Wall Street analysts have become ostriches...

They're sticking their heads in the sand.

That brings up a worrying question...

What are these analysts seeing – or rather, not seeing – in the market today?

And that concern isn't even the worst part of the data. Analysts are so far behind when it comes to a couple of market sectors, it's frightening.

A sector-level look gives us an idea of what's wrong with these Wall Street analysts today. Their ratings reveal a profound lack of understanding of the current market dynamics.

Our Power Gauge system at Chaikin Analytics downgraded XLK to "neutral" on January 5. At the time, it traded at more than $168 per share.

As our chief market strategist, I review various ratio charts for a select group of our subscribers each week. And on April 6, I told folks to continue to avoid the space despite a rally over the previous few weeks. XLK traded for around $155 per share at the time.

The exchange-traded fund closed at about $130 per share on Wednesday. That's a roughly 23% decline in about six months since the Power Gauge's downgrade. Take a look... 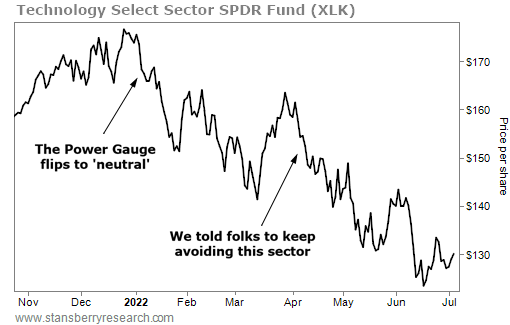 Despite that abysmal performance, Wall Street analysts continued to hold "buy" ratings on roughly 65% of these stocks. It's crazy.

How far must tech stocks fall before the analyst community downgrades the sector?

The Communication Services Select Sector SPDR Fund (XLC) is in a similar position...

The analyst community recently rated 61% of the stocks in this sector as a "buy." And yet, the evidence doesn't support that outlook...

The Power Gauge downgraded this sector from "bullish" to "neutral" on November 1, 2021. That day, XLC traded for around $80 per share.

Then, in our weekly sector review on November 17 for the same group of subscribers, I downgraded the fund as well. It traded for about the same price as it had two and a half weeks earlier.

Now, XLC trades at roughly $56 per share. That's a decline of about 30% in eight months... an incredible drop for an entire sector. Take a look... 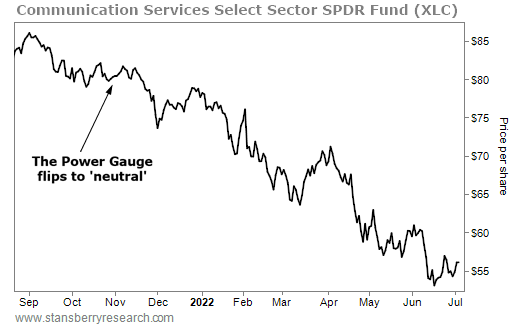 The analyst community simply lacks the capacity to update their ratings as dynamically as we can with the Power Gauge and in our daily insights. And right now, investors are paying the price.

It's hard to say exactly why Wall Street analysts often get things so wrong. Maybe it's because their jobs depend on an outlook that motivates investors to buy.

Whatever the reason is, these analysts will fail you as an investor. Their full-tilt "buy" ratings while investors are getting crushed proves that.

Editor's note: Don't be surprised by a major move in U.S. stocks again this year... Chaikin Analytics founder Marc Chaikin recently came out with a big prediction for the rest of 2022. He says the market conditions we're seeing now are creating a unique opportunity, with the potential for multiple 300% to 500% winners... Plus, he reveals the next beloved stock that his system says is likely to crash. Click here for the details.

"The key to investment success is much bigger than any one measure or signal," Marc Chaikin says. But the "pros" on Wall Street always seem to be one step ahead. That's why Marc created an incredible system to help individual investors keep up... Get the full story here: The Four Main 'Ingredients' to My Life's Work.

In today's volatile market, your biggest winners could tank at any moment. That's why it's crucial to have the best tools at your disposal to determine your next move... Learn more here: This 'Too-Easy' COVID-19 Trade Plunged 52%.