This Is What's Working in the Market â Buy It Now
By Brett Eversole
Tuesday, September 11, 2018

Do more of what's working... and less of what's not.

If you want to make a lot of money in the markets, follow that simple rule.

It'll force you to sell your losers early and let your winners run. That's exactly what you need to earn outsized profits – and to become a better investor.

Today, we want to follow this mantra. And we have a simple way to do it, as I'll share below.

One chunk of the U.S. market is "working" better than anything else right now. And I urge you to own it today.

It's tough to follow the rules of smart investing.

It's no fun to admit you got it wrong when a trade goes against you. The sting is worse when you finally sell and lock in your loss.

So instead of selling, you tell yourself you weren't wrong – you just got in too early. You hold and hope... only to see prices fall lower and lower. It's a vicious and painful cycle.

The opposite problem can happen when an investment works out.

Say you're up 10%, or 20%, in a short amount of time... Your instinct says to sell and lock in the gain. You don't want those profits to disappear. So you jump out fast, only to see prices continue to move higher.

In short, your gut tells you the exact opposite of what you should be doing. You need to ignore your gut and focus on doing more of what's working, and less of what's not.

You can never have a 100% winner if you sell when you're up 20%. You've got to stick with what's working and prevent yourself from getting out at the first sign of success.

Similarly, you can never have a 50% loser if you sell when you're down 25%. You've got to do less of what's not working... and cut your losses.

If you want outsized profits, you have to follow this rule. And we see a simple way to do more of what's working in the markets right now.

Specifically, the tech-heavy Nasdaq Composite Index has been "working best" in the market in recent months. You can see it in the chart below... 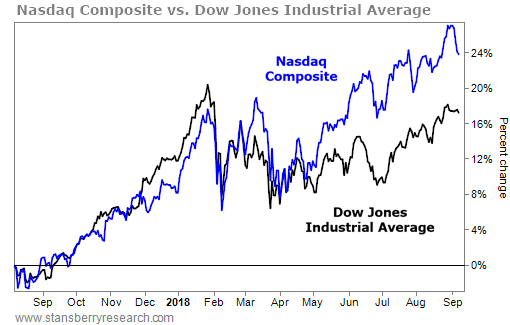 The Nasdaq Composite and the Dow Jones Industrial Average were tracking each other closely. But that ended, starting in April.

Since then, the Nasdaq has taken a decidedly different turn. It is now outperforming the Dow.

QQQ is a simple way to get into this opportunity. And it's a smart bet, now that the Melt Up is fully in place.

The biggest gains of a bull market tend to happen in the Melt Up phase. You want to stay invested now. We still have plenty of upside ahead.

So make sure you're doing more of what's working, and less of what's not. Own U.S. tech stocks today... It's exactly what you should do right now to earn outsized gains.

With the Melt Up underway, we could see explosive gains from here. Steve recently shared another way to own tech stocks and "do more of what's working" today. Get the details right here: Don't Think... Just Own This in the 'Melt Up.'

"Stocks don't simply reach a preset 'limit' where they're determined to fall," Dr. Richard Smith says. Learn why investors often struggle to stick with their winners – and what you can do about it – right here: A Critical Chart for Every Investor to See.

Today, we’re looking at a company surviving the “death of retail”…

Many traditional retailers struggled to keep up with the likes of e-commerce giant Amazon (AMZN)… at first. But now, more companies are bucking the trend. Today’s company has escaped the retail “death spiral” so far…

Dollar General (DG) owns and operates a chain of discount retail stores. The company runs more than 15,000 stores in the United States… And it’s still expanding, even in the face of tough competition online. Late last year, Dollar General announced it was building a new, state-of-the-art distribution center in Texas. The new center will serve 1,000 of its stores in Texas and the southeast. The company’s sales are growing, too… Recently, Dollar General reported second-quarter sales of $6.4 billion, an 11% increase from the same period last year.

As you can see in the chart below, shares of Dollar General just hit a new all-time high. The stock is up more than 45% over the past year. This company continues to prove that retail isn’t dying – it’s changing… 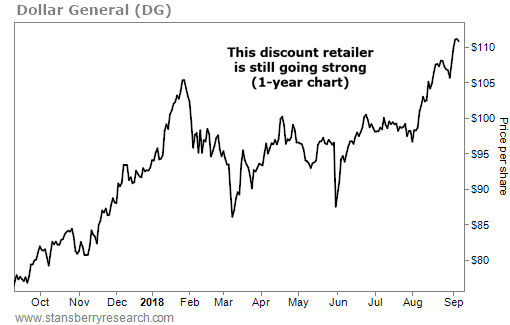