It didn't take long for traders to abandon one of the best performers of 2019...

This asset more than doubled the return of gold and silver last year. And it was up more than 50% in total.

All of that success turned on a dime in February, though. What goes up eventually falls back to Earth... And traders entered full-on "panic mode" when it happened.

Today, this precious metal is down 32% since its February peak. And traders have had enough.

Futures traders have completely abandoned the metal. They've forgotten about the success it had last year. And this means we could see another big rally get underway soon.

Palladium earned its place as the most valuable precious metal in the world in 2019. And at nearly $2,000 an ounce, it still trades for more than the value of gold and platinum today.

Still, despite its rise to dominance, investors aren't holding on to the success of last year.

The recent downturn in palladium has them spooked. They've sold in a hurry.

We can see this sentiment extreme through the Commitment of Traders ("COT") report for palladium. This weekly report tells us what futures traders are doing with their money.

That's important... because when these traders are all betting in one direction, the opposite is likely to occur. 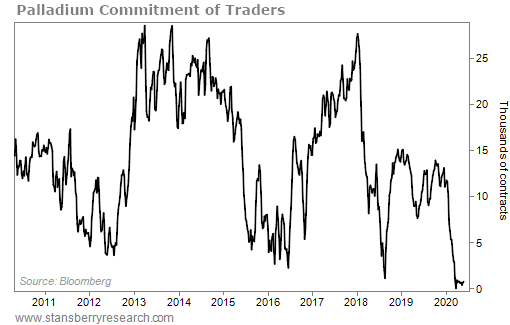 Investors have given up on palladium. These COT levels are the lowest we've seen in years, which tells us futures traders expect the fall to continue.

Unfortunately for these folks, history shows they are likely making a terrible mistake.

We saw similar negative sentiment in 2012, 2016, and 2018. Bets on lower palladium prices reached similar levels back then. But in each case, selling was a bad idea...

First was May 2012. Traders wanted nothing to do with palladium... But the metal then rallied 23% through May 2013. Selling at that time was the wrong call.

Another bearish event happened in February 2016. Palladium was down more than 30% from its 2015 high. Things turned around, though...

Palladium jumped 56% through February 2017. If you bet against palladium in February 2016 alongside these traders, you missed out on huge gains.

Our most recent bearish case came in August 2018. Once again, getting out then would have cost you big time. The metal rallied 57% through August 2019.

Simply put, futures traders tend to get it wrong at the extremes. And they're giving up on palladium right now, in an extreme way.

History shows us that following their lead is a bad idea. In fact, palladium is likely to take off thanks to this hugely negative sentiment.

The trend hasn't reversed yet, so it's not safe to buy today. But once that happens, palladium is set up to retake its star-performer status. And that makes it a precious metal to keep a close eye on today.

The market has been on a violent ride this year. It can be tough to know what to expect next, even for the pros. Thankfully, history tells us that big rallies after major crashes – like we've seen lately – have been extremely bullish indicators... Get the full story here: What to Expect After the Major Rally in Stocks.

Today, we’re looking at a company that supports the do-it-yourself lifestyle…

With the coronavirus keeping people at home, folks need to find ways to pass the time. Some are couch potatoes, spending their time playing video games or binge-watching streaming services… But others take up more active hobbies, like finding ways to make their homes more satisfying and self-sufficient. We’re seeing this lately with a surge in yard and garden work…

Tractor Supply (TSCO) is a $15 billion specialty retailer. It’s a one-stop shop for farm and garden maintenance, as well as other home-improvement projects. During the pandemic, the company has seen an increase in demand for gardening and homesteading supplies, according to CEO Hal Lawton. As a result, the company expects “record breaking” sales in the second quarter, as well as comparable store sales growth of 20% or more.

As you can see in today’s chart, shares are soaring, too. Since lockdowns went into effect in the middle of March, TSCO has surged more than 80%, recently hitting a new all-time high. As people work to improve their lives at home, this company should continue to thrive… 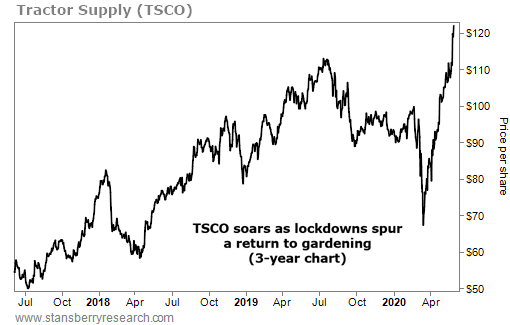