This Will Be the Bubble-Popping Pin for the Markets
By Mike DiBiase
Saturday, May 15, 2021

It's the No. 1 threat on many investors' minds today...

The mainstream media can't stop talking about it... You won't go a day or two without reading a headline or seeing a news story about what it could mean for us.

It isn't a new threat, either. Folks in our country have feared its onslaught for decades...

For example, in the late 1970s, former President Ronald Reagan described it to be "as violent as a mugger, as frightening as an armed robber, and as deadly as a hit man."

Reagan wasn't talking about the perpetrators behind the ongoing Iran hostage crisis at the time... or some rogue organization out to assassinate him.

He was talking about inflation... the general rise in prices in an economy.

Here in the U.S., inflation doesn't happen overnight. It's an insidious force that slowly – and often secretly – erodes our wealth.

Today, I will explain why investors are correct to worry about inflation. Right now, it's the biggest threat to both the stock market and the much bigger bond market.

More important, I'll show you what steps you can take right now to prepare for when much higher inflation rears its ugly head.

Let's start with the biggest myth about inflation...

Many people make the mistake of thinking that a small amount of inflation is good – that it's some byproduct of economic growth. After all, the Fed targets 2% inflation... so that must mean that 2% is a good amount, right?

But have you ever asked yourself why the Fed wants inflation? Why would anyone want prices to increase? Do you want to pay more for the same things you bought last year?

Wouldn't a rational person want the opposite of inflation – deflation?

Most arguments about why deflation is such a bad thing center around the idea that it's only caused by economic contraction. But this view misses a much bigger point... Deflation doesn't have to be caused by a shrinking economy.

I would argue that most price deflation is caused by economic expansion... resulting from increases in productivity.

So what causes inflation?

For starters, inflation isn't a natural outcome of a healthy economy. It's a result of government policy.

Inflation is not caused by the actions of private citizens or businesses. It's caused by the artificial expansion of the money supply by the government. And it slowly takes money out of all of our pockets. That's why American economist Milton Friedman once called it "taxation without legislation."

What really matters, of course, is price inflation relative to wage inflation. In economics, that's known as your "real wages."

For most people, prices have been rising at about the same rate as their wages over the past 50 years. So their purchasing power is roughly the same.

But here's what most people don't realize... They should be much richer than they are because of massive increases in productivity over that same period.

You can see when the disparity started to occur in the following chart. Notice from 1948 to the early 1970s, productivity and wages increased at about the same rate – around 2.5% per year. But in the five decades since then, wages have remained flat while productivity has soared... 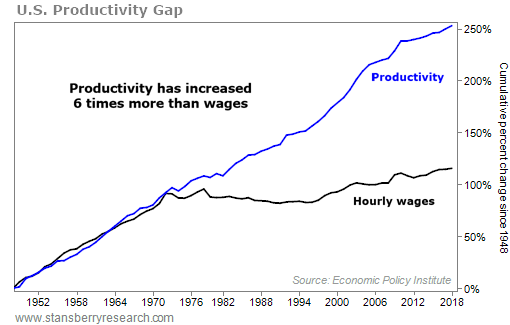 So what happened in the early 1970s to cause such a dramatic divergence?

Former President Richard Nixon took the U.S. off the gold standard. Starting in 1971, U.S. dollars no longer needed to be backed by gold.

In other words, it gave the Federal Reserve free rein to print as many dollars as it wanted.

And as anyone who has taken an economics course knows... when more dollars in the system chase a fixed amount of goods and services, prices rise.

This one policy shift unleashed massive amounts of inflation... Without it, we would all be much wealthier today. And without the increases in productivity, prices would be much higher.

But as the above chart shows, this inflation has been mostly hidden from the average worker. With the massive increases in productivity, our dollars should be able to buy more. But they don't... and most of us are none the wiser.

According to the Fed, inflation has averaged around 1.9% per year since 2000 based on the central bank's preferred inflation gauge, the personal consumption expenditures ("PCE") index.

And the most recent PCE reading in March was 2.3%... It's now above the Fed's stated goal of 2% inflation over the long run.

However, anyone who has bought gas, lumber, or housing recently will tell you that the Fed's published inflation rate feels too low...

Economist John Williams consistently reports an even higher number – around 12% today – on his website, ShadowStats.

But regardless of which number you believe, one thing is clear... Inflation is on the rise today.

We see evidence of this by looking at the U.S. "M2" money supply...

This constitutes all the money in the system, including cash, checking and savings accounts, money-market accounts, and mutual funds. Take a look at what has happened to the M2 money supply over the past year or so... 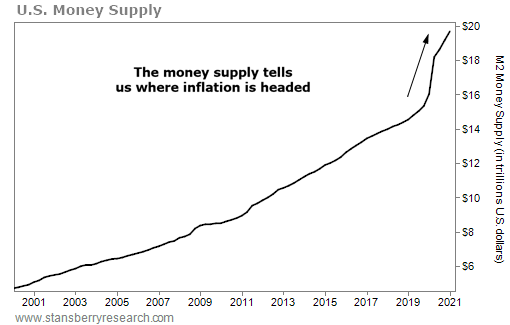 Since the start of the pandemic, the Fed has committed to printing more than $6 trillion to support its stimulus programs. That's more than three times the amount of money that the central bank spent bailing out the U.S. economy during the last financial crisis.

And this likely isn't the final number either... The government is printing and spending like it's Monopoly money.

This can't go on forever. We're fast approaching a tipping point where it will be "game over" for the Fed.

The question is, how fast will all of this recently printed Monopoly money make it through the economy?

Today, banks hold much of it as reserves.

That's why some of my colleagues at Stansberry Research think the fear of inflation is overblown. They don't believe all of this newly printed money will make its way into the economy in amounts that will push inflation well above 2% for a prolonged period.

I can't tell you when it will happen. But I'm convinced it will...

We're already seeing signs of inflation in many parts of the economy, like energy and housing. Gasoline prices spiked 9% in March. And housing prices rose 17%.

Once the Fed's "official" inflation rate starts inching closer to 3%, the printing party will end abruptly.

That's because the government's only way to fight inflation is through raising interest rates or raising taxes. And neither of those outcomes are good for the markets.

Consumers don't have much power to combat rising prices – but creditors do...

Inflation makes the dollars that the creditors will get paid in the future worth less. Their only tool to combat this evaporation of future income is charging higher interest rates... And they will.

While we can't know for certain exactly when it will happen, sooner or later, higher interest rates will be the bubble-popping pin for both the stock and bond markets.

Higher interest rates are also a problem for another reason... They cost companies more to service their debt. And servicing debt is already an enormous problem for many companies today.

One out of every four public companies is considered a "zombie"... a company that doesn't earn enough profit to pay for its interest costs. It will never pay off its debt. A wave of bankruptcies – which is already underway, by the way – will create even more fear in the markets.

The chain reaction will continue... With more companies defaulting on their debt, banks will tighten credit. And that will lead to even more bankruptcies.

We're on the verge of the next credit crisis.

The Fed has exhausted all of its bullets. Firing up the printing press is no longer an option. Interest rates are already just about as low as they can go. Lowering them further will only make inflation run hotter.

The decadeslong downtrend in interest rates is over. I believe they will continue to increase for the next few decades.

So where does this leave investors?

Plain and simple, we're approaching a dark period in stocks.

We're not there yet... But soon, the Melt Down that my colleague Steve Sjuggerud has predicted will arrive. And after that, the stock market will struggle to produce anything close to the kinds of returns that investors have seen over the past few decades.

But this doesn't have to spell disaster for your finances. It simply means that in the future, it will be more important than ever to know where to invest your money.

One of the oldest ways to fight inflation is by owning precious metals like gold and silver or shares of the companies that mine these metals. Bitcoin is a new anti-inflation investment... It's often called "digital gold."

You don't need to completely write off the stock market, either. It will be tougher to make money in stocks in the years ahead, but there's a lot of money to be made... if you know where to look. Some companies will thrive as prices increase.

But there's another type of investment you should consider. They are completely outside of the stock market and have the potential to bring in stock-like returns... while being safer than stocks. Most investors will completely ignore them. I'm talking about corporate bonds.

And the very best time to buy corporate bonds is during a crisis. That's when you can make the most money. It's a strategy the world's best investors use.

Of course, you can't just go out and buy any bond and expect to become rich. But if you know where to look, the right bonds will help build your wealth during the next credit crisis... when almost everyone else is losing money.

Editor's note: Inflation fears are manifesting, leaving investors searching for a safe place to invest when stocks begin to struggle. Mike's Stansberry's Credit Opportunities service focuses on finding just that... investments that are safer than stocks and can generate stock-like returns. To learn more about this "safe haven" outside of the stock market, click here.