Trade Like a Fighter Pilot
By Enrique Abeyta
Friday, February 19, 2021

He's one of history's great military strategists, but you likely haven't heard of him...

Colonel John Boyd was born in Erie, Pennsylvania, and joined the Army Air Corps in 1944, while he was still in high school. After graduating from the University of Iowa, he was commissioned into the Air Force during the Korean War and flew a short tour (22 missions) where he never claimed a kill or even fired his guns.

After Korea, he was assigned to the Air Force's Weapons School, where he graduated at the top of his class and became one of the most influential instructors – writing the school's tactics manual.

While there, Boyd developed a concept called "OODA," which stands for: observe, orient, decide, act.

These were four steps that Boyd applied to combat operations... But today, the concept applies to fields beyond military strategy – including business and law enforcement. They also happen to be four great steps to think about while investing – especially in crazy markets like today.

So today, let's take a look at each and see how they apply to trading...

The first step is to build a comprehensive picture of the situation with as much accuracy as possible. For a fighter pilot, this can mean understanding who the enemy is, how many planes there are, what type of equipment is being used, or what the weather is like.

Information alone isn't enough. You also need to think about the meaning of the information and decide what is relevant – context is everything.

This step is the most complicated... It's about understanding what's truly important and what isn't in the situation. It's critical to build a plan around trading that's rooted in reality, as opposed to your assumptions.

Another way to think of this is to pause to consider your biases...

Boyd used an example of a snowmobile. It's a vehicle built from many disparate elements: treads like a tank, skis, a boat motor, and the handlebars of a bike. If you look at them by themselves, you might assume these elements are useless... but together, they create a functional vehicle.

My version of this is to focus on what works in trading, not what you want to work.

This one is fairly straightforward – make a plan!

This concept makes up the first half of my favorite saying: Plan the trade.

Once you've analyzed your situation and worked to understand your biases with a goal of developing a pragmatic and realistic view – you decide on a plan to execute.

This is the last half of my favorite saying: Trade the plan.

Now, you execute what you've set out to do. Discipline is key in making sure you stick to your (hopefully) well-thought-out plan.

With trading, the best way to think about this methodology is through constant application. Every time you're looking to make a trade, go through this process.

As you see the results of your actions, do an analysis of what worked and what didn't and try to determine why it did or did not. This is an iterative process. You need to repeat it for your efforts to pay off.

The tactics that have guided our fighter pilots for the past 50 years can also help improve your trading... so keep this approach in mind.

Editor's note: As of early 2021, you could've collected $785 on Apple... $310 on Pfizer... and $730 on Home Depot without ever actually buying the stocks. It's all possible thanks to a specific trading strategy. With this technique, you always get paid up front, and you know your exact payout before getting in. Plus, it comes with a twist that could help you make even more money... Get the details here.

It's crucial to know not just what you're investing in, but why you're investing at all. The obvious answer is to make money. But if your plan is to make truly meaningful returns, you need to plan around your goals... Read more here: Figure Out WHY You're Trading and Investing.

"The vast majority of investors and traders underperform the market," Enrique writes. But that doesn't have to be your fate. That's why Enrique put together this four-step list that every investor should keep in mind... Get the full story here: Follow These Four Easy Rules to Become a Better Investor.

Market Notes
THIS MINER WINS AS THE ECONOMY REBOUNDS

Today, we’re checking in on a company that’s thriving as the global economy rallies…

Pandemic-related shutdowns crushed the economy last year. But since last March, many sectors are showing signs of recovery. We can see this by looking at commodities like copper, which is used in many industrial applications. Today’s company has continued to benefit from this trend…

Southern Copper (SCCO) is the fifth-largest copper producer in the world. In 2020, the company reached new milestones in its production history for metals like copper, molybdenum, and silver. Not only that, but Southern Copper was able to charge more for some of the metals that it mines… Its revenues increased 26.7% year over year in its most recent quarter, mainly driven by those higher metal prices and an increase in sales volume.

In August 2020, our colleague Bill Shaw recommended shares of SCCO to his Commodity Supercycles subscribers. When we last touched on SCCO, readers who followed his advice were up 21% in just three months. Three more months later, and readers are now up 74%. Congrats to Bill and his team! 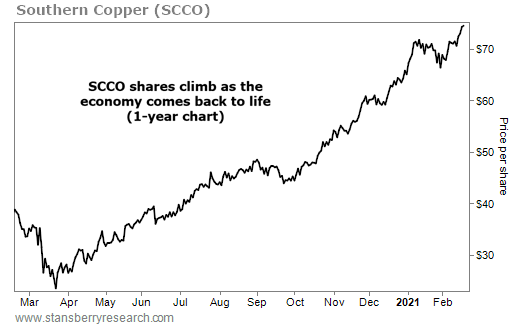