'Under the Radar' Stocks Are Your Ticket to Outsized Returns
By Berna Barshay
Saturday, June 5, 2021

Editor's note: This Weekend Edition, we're taking a break from our usual fare to share an essay from Berna Barshay at our corporate affiliate Empire Financial Research. In it, Berna explains why looking where the crowd isn't will help you find low-hanging fruit within a competitive market... positioning you perfectly for when Wall Street finally takes notice...

Investing is a competitive game...

In the big picture, every trade has a winner and a loser. There's always someone who sold right before a stock goes up... or vice versa. For every great stock purchase you make, someone else willingly sold you those shares.

The investing business has only gotten more competitive in the nearly 30 years that I've been working in the markets. Information advantages have been whittled away through regulation and the near-instant spread of information on the Internet.

It's funny to think about now, but when I was a rookie analyst covering European stocks in the 1990s, it was a big advantage to be able to get an overnight-mailed copy of an annual report a day or two before my peers.

In a similarly dated memory, I remember the look of shock that I gave my elders at Goldman Sachs (GS) right out of college when they showed me the giant rows of fax machines. These received press releases from companies and news of analyst upgrades and downgrades early in the mornings... which allowed for more nimble trading on the market open.

Not only does information move around instantly these days, but regular investors are also fighting against computer-driven algorithms that could be completing hundreds of calculations in the time it takes you to read this sentence.

Lots of professional money managers pride themselves on leaving no stone unturned when doing research...

This is a good strategy, but it's a hard one to win with when you're competing against Wall Street shops with deep pockets. They can afford to pay industry consultants and buy expensive market and industry data.

I've made money at times in my career when I was truly confident that I knew as much as anybody else about a company, but those times were few and far between. And given the extreme level of competition, whenever I really thought I figured out something that no one else had, it was inevitably because I was basically fishing in a pond by myself.

At one extreme, think of a stock like e-commerce giant Amazon (AMZN)...

I can have an intelligent, well-reasoned opinion about the company. But I would be hard-pressed to come up with an insight no one else has thought of yet. Amazon has 55 sell-side analysts closely following its stock... nearly every money-management firm looks at it... and your Uber driver and barber probably even have an opinion on it.

It's going to be hard for me to know something about Amazon that nobody else knows. That doesn't mean I can't make money on it... It will just be harder to gain an advantage that nobody else has.

What's much easier is finding a gem that's under-covered and overlooked by Wall Street. A stock that has little to no sell-side coverage. One that most people at a cocktail party haven't heard of. Or maybe a company you didn't even realize was publicly traded.

"Under the radar" stocks offer great opportunities for outsized returns...

These unknown gems may trade at cheap valuations because they haven't caught the interest of big institutions. Under-the-radar stocks usually have smaller market caps, so it just isn't worth the time and resources for a massive hedge fund to dig into the story. The liquidity and size isn't there to move the needle for an investor deploying billions of dollars of capital.

Wall Street analysts tend to ignore these companies as well, since they have little financial incentive to get involved.

A stock might be ignored for a number of reasons, but that doesn't mean it can't be a great investment.

One of the first times I made big money with an under-the-radar stock was with storied retailer Loehmann's...

The company was legendary as one of the first off-price retailers. Long before Ross Stores (ROST) or TJX Companies' (TJX) TJ Maxx, Loehmann's was offering premium brands at deep discounts by purchasing end-of-season leftover goods from department stores or designers.

Loehmann's grew to a 100-store chain by 1999. But then, it fell on tough times. Having overexpanded, the company got in a cash crunch and filed for Chapter 11 bankruptcy.

When it was emerging from bankruptcy in late 2000, it was a leaner, meaner company with fewer, more productive stores. Having been a Loehmann's shopper since I was young, I was surprised to see it come to the public markets post-bankruptcy.

Nearly two years after its return, the company's stock was largely unknown and traded at a low price-to-earnings (P/E) ratio, despite having good business momentum. No Wall Street bank analysts on the sell-side were following the shares.

I bought the stock in my fund in mid-2002 around $7.50 per share... and after two years, there were still no sell-side analysts following the stock. But that didn't stop Loehmann's from getting taken private by a Middle East-based private equity firm for almost $23 per share...

Sadly for us bargain-seekers, Loehmann's didn't make it to its centennial, and instead ended up in liquidation bankruptcy in late 2013... but that was long after I had already tripled my money.

Loehmann's was a long time ago, but under-covered gems can still be found in today's competitive market...

Last September, we were looking to put together a special "Biden Investment Blueprint" portfolio for our Empire Investment Report newsletter. We wanted names that would benefit in the event that the Democrats won the White House and the Senate.

My mind immediately went to Citi Trends (CTRN), a small-cap retailer catering to low-income customers who would see big increases in their purchasing power if the minimum wage moved higher, per the stated Democratic agenda.

Citi Trends – like TJ Maxx and Loehmann's – is an off-price retailer. It offers brands for less by purchasing overstocks and misfires. And it supplements those buys with unbranded products to offer a big selection of apparel, footwear, and accessories. The company has also been including more home goods, toys, and beauty products in an effort to capture more share of its customers' wallets.

What differentiates Citi Trends from TJ Maxx and Ross isn't just the size of its stores – which are much smaller – but also where they're located.

While you might find a TJ Maxx in a strip shopping center in an upscale suburb, maybe next to a Target, you'll likely find a Citi Trends in a much less ritzy center – typically sitting with a dollar store, a sporting goods shop, or a McDonald's.

Citi Trends invests in lower-income neighborhoods, where TJ Maxx and Ross Stores usually don't. The stores, with their smaller size, have more of a mom-and-pop feel... even though Citi Trends is a chain.

Its sound strategy in a well-carved-out niche with limited competition piqued my interest, and I thought the chain had unexploited potential. Just like it's easier to pick a truly undervalued stock when you look where everyone else isn't, it's much easier to make sales as a retailer to an underserved customer than an overserved one.

Additionally, Citi Trends has always maintained a cash-rich, debt-free balance sheet, which has helped it persevere through tough times.

The problem with Citi Trends over the years was that its execution had been uneven... and so had the stock performance.

For many years, I would meet with the company's CEO or CFO at a January conference, and I would inevitably be one of only three or four people who showed up for the session. Meanwhile, higher-profile companies at the same conference attracted 20 or more analysts.

I believed the uneven execution at Citi Trends was due to sleepy and so-so management.

But after my annual meeting with the company in January 2020, I thought that might be about to change...

In early 2020, Citi Trends announced a new CEO named David Makuen. He had previously been an executive vice president of marketing and strategy at Five Below (FIVE) – a well-run niche dollar-store chain.

When I met Makuen, he hadn't even started his job yet, but he discussed big plans for taking advantage of the low-hanging fruit that I had long suspected existed at Citi Trends.

Since adding CTRN shares to the Empire Investment Report portfolio in mid-September, it has become the highest-return pick in Empire Financial Research history... up 270%. 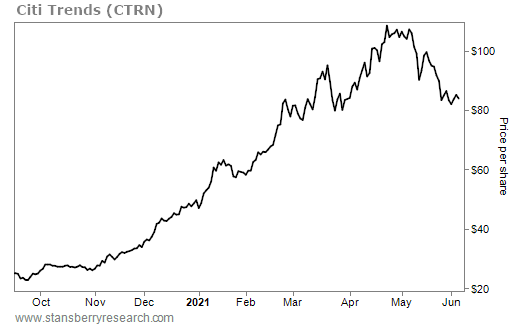 Citi Trends has been one of my biggest winners ever, but it was also one of the easiest trades I ever made...

It was obvious. But it didn't take two decades on Wall Street to get this trade right. You just needed to be looking in the right place – something very few people were doing last fall. Of course, now that the stock has more than tripled, Citi Trends finally got its first sell-side research initiation from Wall Street.

There's comfort in investing in what's obviously popular... but some of the easiest money can be made by going where the crowd isn't.

Editor's note: On Thursday, June 10, Wall Street veterans Whitney Tilson and Berna Barshay are hosting a historic online event that has been more than a year in the making. There, they'll reveal how a "hidden" corner of the market could help you beat the market, generating triple-digit gains in stocks that are off Wall Street's radar. Click here to RSVP for this free event.