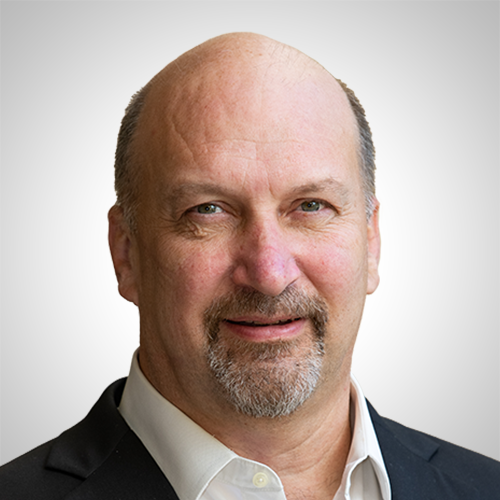 Editor's note: Our company recently broke a huge new research story from our colleague Dave Lashmet... So today, we're shining a spotlight on his unique approach to the market. In this piece – originally featured in DailyWealth in September 2020 – he shares how thinking like a classic venture capitalist can help you find small biotechnology stocks that crush the competition...

They think of men in $5,000 suits trying to predict the next Apple or Facebook. But the concept of venture-capital investing goes back more than 75 years to one of America's blue-blood families.

Second, over the next 20 to 30 years, the older segment of our population is going to explode. And aging Baby Boomers will continue to spend a fortune on everything from pharmaceuticals to lifesaving devices.

This is why some venture capitalists are now holding on to early-stage drugs, too... At least, they are trying to. But human clinical trials are so expensive, these small drug companies almost have to go public to share the risk.

That's the core of what we do in my Venture Technology newsletter... We share a common understanding with early-stage venture capitalists. We give up some of the reward, but we also retire most of the risk... Plus, we stay more liquid.

Editor's note: Dave recently found a small, up-and-coming chipmaker that's 100% U.S.-owned. It has a barrier to entry that competitors can't easily match... And he believes it's virtually guaranteed to receive hundreds of millions of dollars – or more – from Congress as it pours $52 billion into the chip industry. If you act now, you'll get all the specifics about this opportunity... plus a full year of Dave's Venture Technology research... at 50% off the regular price. Learn more here while you can.

When you think of biotech stocks, you probably think of new blockbuster medications... But that's not the only way to make money in this sector. Unlike making drugs, another type of biotech company can offer stable profits... Learn more here.

"Even high-flying momentum stocks can come back down to Earth," Dave writes. "So how do you invest for the future?" This is especially important when investing in tech companies. And to succeed, you need to get in a specific mindset... Read more here.

Longtime readers are familiar with what Dan Ferris calls “World Dominators.” These companies stand out in their industries and have fortress-like balance sheets… making them well-positioned to endure almost any market environment. They are one of the safest kinds of investments you can make. And today’s company is a great example…

Cisco Systems (CSCO) is a $250 billion Internet powerhouse. It makes networking devices such as routers and switches – what we call the “plumbing” of the Internet. The company estimates that 85% of Internet traffic travels across its systems. And as our world becomes more “digitized” each day, Cisco remains the worldwide industry leader… In the most recent quarter, the company saw product order growth of 31% – the strongest year-over-year growth in more than a decade.

As you can see, CSCO shares are in a strong uptrend. They are up roughly 40% over the past year and recently hit a fresh all-time high. As long as the world depends on Cisco to get online, this success should continue… 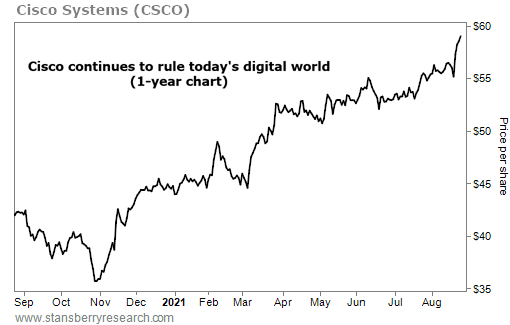