Warren Buffett was furious. To him, it was just the latest failure with as-reported accounting.

The legendary investor frequently comments about the problems with standard accounting, known in the industry as generally accepted accounting principles ("GAAP").

And it was about to get worse... A new GAAP rule was going to have a major impact on Buffett's company, Berkshire Hathaway.

That's why he kicked off his 2018 letter to shareholders by railing against the problems with accounting.

Berkshire's book value per share was about to go from constantly growing to surprisingly rocky. Thanks to the new rule, Buffett had to report his investments' normal, day-to-day price changes as unrealized gains or losses.

Even if the real value of the business didn't change at all, he had to report those artificial swings. And Berkshire's investment portfolio was so large, it often saw one-day price fluctuations of $2 billion or more – which would now go straight to the company's bottom line.

Because of problems like this, Buffett never invests just using these metrics... And rightfully so. The GAAP numbers offer an incomplete picture of a company's real performance.

At Altimetry, we identify the dislocations created by these accounting distortions. We can use our Uniform Accounting framework to expose signals that most investors are missing.

These signals are a better way to gauge a company's real performance and valuations. This means we can see businesses for what they really are... often before the market does.

It can be tough for investors to grasp why this idea is so important, especially when we write about lesser-known companies.

So today, I'd like to highlight one of our favorite examples to bring up when we're teaching or speaking at conferences.

Everybody knows this company. But it's also one of the most powerful dislocations we've ever uncovered. Not only that, but as of last year, we can definitively say that Buffett agrees with us...

Even though it's one of the largest companies and best-performing stocks in the world today, getting there wasn't easy...

For years, negative headlines about Amazon dominated the news.

A 2014 Investopedia article titled "Amazon Never Makes Money But No One Cares" argued that Amazon's profits – since the company launched – totaled less than what oil giant ExxonMobil (XOM) takes home every two and a half weeks. Yet the stock had soared 16,000% since 1997. That doesn't sound right.

Three years later – with AMZN shares up 35,000% since 1997 – Forbes published an article titled "The Amazon Era: No Profits, No Problem." This makes it sound like we're returning to the dot-com era of eye-popping valuations for companies with no cash flow – a scary thought.

Then, in 2018, something changed. Amazon was profitable. In the fourth quarter of 2017, it reported $1.9 billion in net income... supposedly more than it made over 14 years' worth of financial reporting. It's like a switch has flipped and the company hasn't looked back since.

And nearly the whole time, over the past decade, Amazon has moved higher and higher... 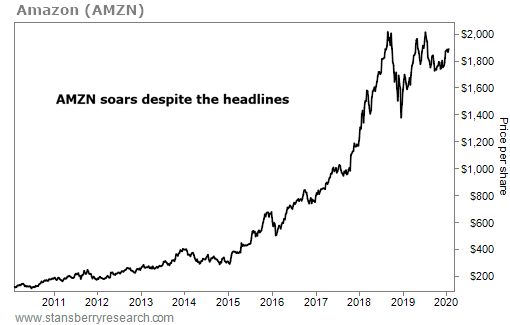 Last year, after revealing a stake worth roughly $1 billion in Amazon, Buffett admitted he was late to the party.

And yet, looking at Amazon's as-reported return on assets ("ROA"), it's difficult to see what changed for the company... 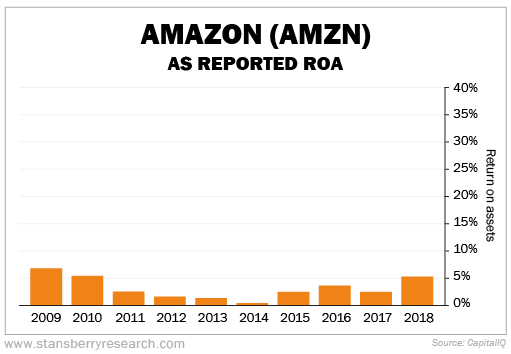 Amazon's as-reported ROA was 5% in 2018 – higher than it had been in a decade – but it's far from the record-breaking year suggested by the headlines.

But far from the popular opinion that Amazon has just now "flipped a switch," the real numbers show us that this is a company with a history of strong ROA and growth.

The chart below shows that same false profitability stream for the company. But it also shows the company's real return. The return that an investor like Buffett would see once he removed the accounting noise... what we call Uniform Accounting.

If the company has better growth and returns than the market thinks, the stock price should rise. If it disappoints, the stock will fall. Buffett is betting Amazon can beat the market's expectations. 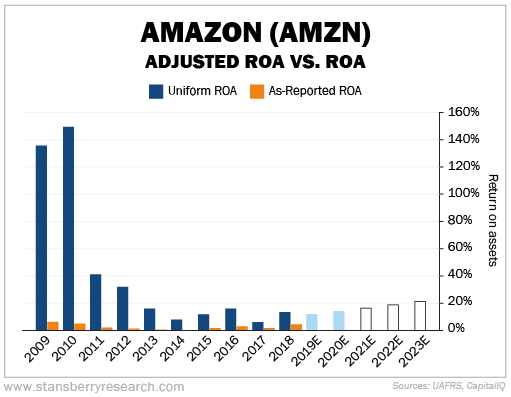 Back in 2009 and 2010, Amazon was churning out returns well above 100%. The difference between as-reported and Uniform ROA was so large, you can barely see the as-reported ROA on the chart. And even when almost everyone thought Amazon was unprofitable in the mid-2010s, the dislocation between its Uniform and as-reported ROA was huge.

While returns have "come back to earth," Amazon is still a massively profitable company – with a 14% Uniform ROA in 2018. 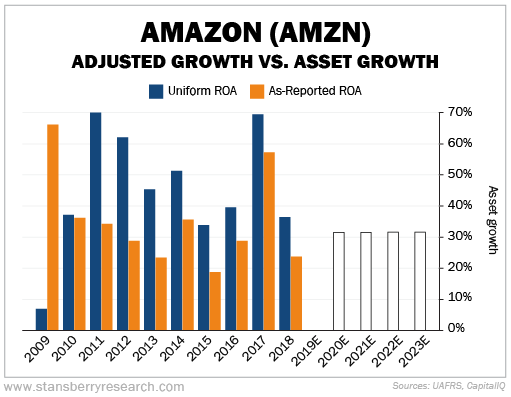 This is the exact kind of disconnect that we look for at Altimetry. For years, Amazon looked like it was generating paltry returns while it was focused on growing its business. As a result, the headlines complained that the market was on its way back to the dot-com era – focusing on growth with no sign of profit.

By using Uniform Accounting, we can see why Buffett regrets not acting sooner. Amazon showed its earnings potential years before the market realized.

With Buffett's recent investment, he must believe the market still doesn't see the full picture for Amazon. And once you filter out the accounting noise... the numbers agree.

Editor's note: Joel just released a brand-new special report to his subscribers, where he reviews Amazon and the rest of the so-called "FAANG" stocks... and also unveils a group of five companies that could become the "new FAANG" stocks. Learn how to access this report and get started on a 100% risk-free 90-day trial subscription to The Altimeter right here.

Looking at this specific metric can show you the bigger picture about investment trends. And it's a great way to gauge what's happening in today's bull market, as Joel explains. But you've got to be looking at the right numbers... Get the full story here: The Difference Between a Bull Market and a BULL Market.

"Accounting isn't a sexy subject," Mike DiBiase writes. But without a fundamental understanding of it, you'll never be a great investor. Get his insight into financial statements and why they can fool even experienced Wall Street pros right here: How to Spot the Next Enron Before It Happens.

Today’s chart shows us the economy is still chugging along…

Longtime readers know we like to use “real world” tools to keep our finger on the pulse of the economy. And industrial companies are some of our favorites. When these companies are selling parts to manufacturers, it means everyone is busy building, moving, and making stuff. And today’s company is providing the parts that keep our day-to-day lives functioning…

Dover (DOV) is a $17 billion provider of industrial parts, with 24,000 employees around the world. Its five departments work in a broad range of industries… from making freezer doors and lighting for refrigeration (think grocery stores) to selling parts for gas pumps. Many of Dover’s products are critical to the safe handling of fluids in the chemical, hygienic, and energy markets. And business is booming today… Dover recently reported third-quarter adjusted earnings of $235 million – up 15% year over year.

As you can see, shares have soared over the past five years. They’re up nearly 140% including dividends, recently hitting a new 52-week high. And as the economy keeps going strong, that trend should continue… 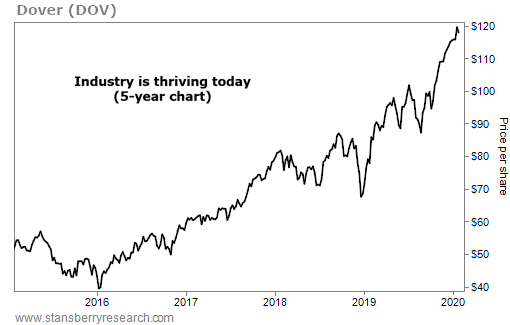