Watch These Surprising Signals as the Recession Sets In
By Corey McLaughlin
Saturday, July 9, 2022 We hate to begin today's essay with a downer...

But a recession in the U.S. is all but "official" now. And simply put, that could mean more fear and volatility for the stock market in the weeks ahead.

In the first quarter, gross domestic product ("GDP") declined by 1.6% from the previous quarter. The decline was 8.5 percentage points lower than fourth-quarter 2021 growth of 6.9%.

In the second quarter, which just ended, GDP declined again by 1.9%, according to the latest estimate from the Atlanta branch of the Federal Reserve. Pair these realities with a record low in consumer sentiment (because of runaway inflation), and you have enough information to say we're in a recession.

The professional economists haven't declared it yet, but they should soon – and they almost certainly will if enough people lose their jobs in the months ahead.

The point is, inflation is still at multidecade highs... economic growth is slowing... and the markets are expecting these troubles to continue.

You can take your pick of supporting evidence. That includes one surprising piece of data...

We've seen an incredible bull run in commodities over the past year-plus. Now, the trend has turned around.

In the May 17 Digest, I mentioned that the Invesco DB Commodity Index Tracking Fund (DBC) – which tracks futures prices on 14 of the most heavily traded and important physical commodities in the world – was up 50% over the previous 12 months.

Well, now this fund is down nearly 20% in the past month. And it's trading below its 50-day moving average (50-DMA), a simple rolling-price measure of a short-term trend.

Oil is a big part of the equation. Prices of West Texas Intermediate ("WTI") crude and Brent crude – the international benchmark – plunged by 9% and 11% on Tuesday, respectively, to around $100 per barrel.

This is potentially good if you're interested in paying less when you fill your gas tank or heat your house – or maybe want to trade what look to be short-term "oversold" levels. But this trend also suggests the market expects declining demand... because of a potential recession.

We're at a new stage of the post-pandemic "recovery" and our ongoing inflation story...

This is when the Fed and other central banks play catch-up on inflation, raising interest rates and egging on a recession to bring costs down in the economy.

Stansberry NewsWire editor C. Scott Garliss worked for 20 years on Wall Street before joining Stansberry Research. He points out that institutional investors and money managers look six to 12 months ahead when making portfolio decisions, thinking... What will the world look like then?

As Scott shared last Friday, he's seeing signs that professional investors expect economic activity to crater. For example, consider the prices of copper, steel, or aluminum – key raw materials for so many products. As Scott wrote...

It's hard to imagine anything being built without steel or copper used in one form or another. If something we consume isn't made from steel, the machine that produces it is. And copper has all types of industrial uses because of its resistance to corrosion, ductility, malleability, and electrical conductivity.

And today, "Dr. Copper" and other metals are doing poorly...

As longtime readers know, copper prices tend to predict big turning points in the global economy... so much so that in investment circles, folks say the metal has a Ph.D. in economics.

Clever analogies aside, prices of commodities like copper are in "freefall," Scott says. You can see it in Bloomberg's base metals spot price index. And at the start of each of the previous three recessions, we've seen the same market behavior... 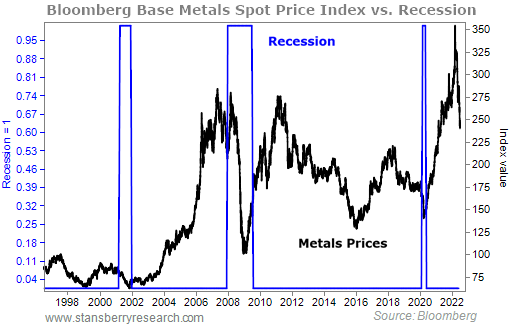 In the previous examples, each time the Bloomberg index tumbled more than 20%, it was on the front end of a recession.

From the peak made earlier this March, the index has dropped over 32%.

The big thing to watch next as the Fed raises rates is how much it hurts the job market...

There are a few reasons why. First, people losing their jobs stinks for all involved.

Second, the Fed may start to rethink its money "tightening" policies if unemployment spikes. The central bank doesn't want people unable to pay their mortgages and other loans.

The job market is still in pretty good shape overall. The June unemployment rate came in at 3.6% on Friday... holding steady from May. Employers added 372,000 jobs versus expectations of 268,000. And the labor force participation rate ticked down only slightly (to 62.2%).

But this will likely change if Fed Chairman Jerome Powell gets his way. And a reversal in policy might take a worse unemployment picture than you'd expect...

At a press conference last month, Powell said that as long as it got rid of inflation at the same time, higher unemployment would be a "successful outcome." So don't say we (or he) didn't warn you that more pain could be coming.

We can't know for sure what inflation will look like over the next year or so. But if it's lower than it is now, we could then see the Fed deciding to cut interest rates to stimulate the economy once again. And on the cycle goes.

For now, CEOs of some of the past decade's biggest growth companies, like Meta Platform's Mark Zuckerberg, are not hesitating to trim their payrolls... and their workforce... because of tighter profit margins from higher costs and lower growth.

You might be wondering what to do about all this...

And more specifically, you might be wondering what the eve of a recession means for your investments.

Hopefully, you've stockpiled an appropriate amount of cash at this point, in line with your goals, either by choosing to sell or sticking to your stop losses. Keeping a core portfolio of high-quality, low-volatility stocks would also serve you well.

Maybe you've also put on some bearish trades, like the kind our Ten Stock Trader editor Greg Diamond has been recommending all year long.

And hopefully, you've protected your portfolio against inflation by holding hard assets like gold, which has outperformed most every other asset this year simply by not going down as much (off 3.5% so far in 2022).

The wisdom of these cautious strategies hasn't changed much over the past several months...

We first shared the following warning roughly three months ago...

It came from our friend Marc Chaikin, the founder of our corporate affiliate Chaikin Analytics. If you've been with us for the last year or so, you should be familiar with him.

Marc's inventions and indicators are part of every Bloomberg Terminal in the world because they are that valuable... In short, he's a Wall Street legend.

In his April 2 Weekend Edition, Marc wrote that the "rolling crash" was already here, meaning that various sectors of the market were selling off dramatically and that the trend wasn't finished yet. As he explained...

Most folks right now are worrying about the next big market crash. They're scared that it will come soon.

But if you're looking at the market like I do – and like a hedge-fund manager would – you know the real answer...

He pointed out that biotech was down 47%... retail was down 25%... transportation stocks had crashed 20%... and on and on. He said that a 20% drop in the broader market should be expected.

Mind you, this was before most of the investing world caught on that we were headed into a bear market.

Those who listened to Marc are likely happy they did. In a presentation at the time, he offered up ways to protect your portfolio by sharing exactly what parts of the market to avoid, including specific stocks that his Power Gauge system had flagged as extremely bearish.

One of these companies was the online food-delivery business DoorDash (DASH), which enjoyed skyrocketing popularity during the pandemic. But Marc warned the stock would soon come crashing back down to Earth. Soon after his warning, DoorDash shares dropped 40%.

Now, Marc is sharing another warning – and an opportunity...

He just went on camera for the second time this year to provide a critical update to his earlier warning, and to shed some light on what you can expect over the next 90 days.

Just like before, he shared the stocks that his system says are doomed in the coming weeks. He also shared a big prediction for the rest of 2022 – to help make sure you're not surprised by another major move in U.S. stocks.

This move could create more devastating losses for some investors... But it could also help folks erase the kind of losses and heartache they've felt in the past three months. In fact, there's one group of stocks Marc says could rise 300% to 500% from here.

What we're seeing now isn't a straightforward "everything is down by the same amount" market every day. There are particular stocks that you want to avoid. Just for tuning into Marc's latest video, you'll hear the ticker symbol of one of them.

For now, keep your defensive strategies in place. The recession is here... And we'll see more pain in the markets before things get better.

Editor's note: Marc's warning has been coming true... And he sees a major shift on the horizon. This event could bring devastating losses to investors who don't see it coming. But there's still time to prepare... In his recent on-camera appearance, Marc released a critical market update on what's happening, how to take advantage of it, and how to avoid the worst-hit stocks as it unfolds... Get the details here.