I recently attended a closed-door meeting with some of the brightest minds in our business...

Darn near everyone was laser-focused on one topic. Over and over again, I heard variations of, "It looks like the market is due for a correction."

Here's the thing... I agree. Stocks have had a pretty good run. And it's starting to feel like a pullback will happen soon.

Maybe your "spidey senses" are tingling too. Do you think a correction is near? And more important, what do you plan to do about it?

Well, if you're investing, and your plan is to get the most out of this Melt Up that you can, I have one word for you. Stop.

If you want to ride the Melt Up, you need to "zoom out" at times like these – and make sure you're looking at the big picture...

Regular DailyWealth readers should know the Melt Up thesis well by now. My mentor and colleague Steve Sjuggerud developed it.

The idea is pretty simple. But it's one of the most powerful themes in finance right now.

A Melt Up is the furious final push of a manic market before it collapses. It's an event that can produce life-changing investing returns. And it happens fast, often in just a year or so.

We're also seeing one of the key hallmarks of a Melt Up right now: retail-trading euphoria. I wrote about this yesterday.

So, we know that a Melt Up scenario is in place, and that it's likely the market can soar to astronomical levels from here.

Despite that, I was in a meeting full of analysts fretting over a potential 10% correction. And I was right there with them. But I realized my own nearsightedness.

It's easy to get tunnel vision when you spend all your time looking at the markets... But don't let that "expert's mindset" fool you.

We're here to invest... not flail at trading market volatility. The simple truth is that Melt Ups come with volatility. Corrections are normal. The chart below shows it... 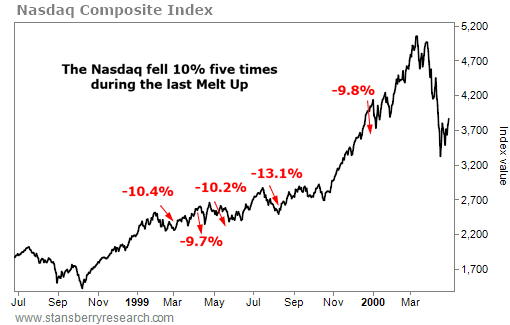 Imagine if you'd gotten out of the market right after the first correction. Or the second. You would have missed out on life-changing returns. Worse still, maybe you rode the tech bubble all the way back down... waiting for things to turn around.

Short-term thinking and a lack of strategy can produce results like that. Don't fall victim to losing sight of the big picture.

Right now, the data says we're in the midst of a Melt Up. So while a correction could be looming, it's likely nothing to worry about.

Every time the market makes a new high, the naysayers sound off. They think you should hunker down and get ready for a correction. But in reality, there's historical precedent for stocks continuing to go up... Read more here: Why the 'Groundhog Day' Trap Could Ruin Your Investments.

What's an investor to do? You don't want to lose your gains to a correction, but you also don't want to miss out on a big run higher. The best thing to do right now is to make sure you're ready for whatever happens in 2021... Get the full story here: You Don't Ever Have to Be 'All in' or 'All Out' in Investing.

As regular readers know, Steve is bullish on the U.S. housing market. Mortgage rates are nearing record lows while housing inventory is scarce. That means lots of folks want to buy a home, and they’re paying a premium to do it. We can see this trend unfolding with today’s company…

Lennar (LEN) is the largest homebuilder in the country based on sales. That means its performance helps us see how the overall U.S. housing market is doing. And the news has been good… In the most recent quarter, Lennar made an $882.8 million profit, a year-over-year increase of more than 30%. And the rally isn’t over… Customers ordered 15,214 new homes in the most recent quarter – 16% more than this time last year.

LEN shares are up nearly 190% from last year’s March lows… And they recently hit a new all-time high. As long as folks keep snapping up homes, Lennar’s strong performance should continue… 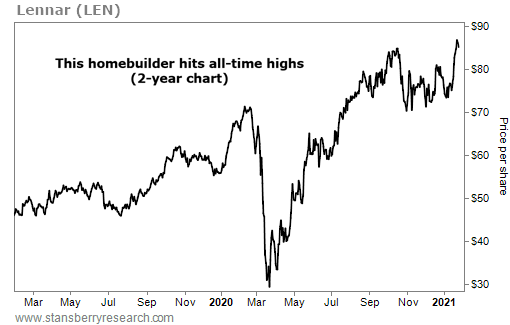