We're Nearing the End of the Downturn... But We're Not There Yet
By Marc Chaikin
Wednesday, December 14, 2022

Editor's note: Inflation is beginning to cool. It's one of the few bright spots we've seen in the economy this year. And with all the negative sentiment that has built up in the markets lately, it's time to take a look at what's next... So today, we're sharing an essay from Marc Chaikin – founder of our corporate affiliate Chaikin Analytics – to do just that.

I don't need to keep harping on the market's struggles...

Even with its most recent bounce, the S&P 500 Index is still down 16% in 2022. And the tech-heavy Nasdaq Composite Index remains in full-on crash territory. It's down nearly 30% from its November 2021 peak.

With stocks down, it means less money for most investors. But it's even worse... Prices of nearly all household items are still sky high, even with cooling inflation.

The average American consumer is faced with a big problem... They have less money to spend on items that are more expensive than ever before.

If you're like most people, you haven't had much confidence in our economic outlook lately. In fact, one of the leading indicators used to predict investors' feelings shows that things haven't been this bad in decades.

That's tough to hear. But you might be surprised to learn this...

It likely means we're nearing the end of this downturn.

The leading indicator I'm talking about is the University of Michigan's Consumer Sentiment Index.

Put simply, the Consumer Sentiment Index tells us how confident the average Joe is in the economy at any given time. It's sometimes referred to as "consumer confidence."

The bottom line is this... Consumer spending is the bedrock of the economy. And confident consumers spend money.

The bad news is, people are feeling pretty down on their luck these days. After all, we're in a bear market.

But fortunately, our current situation has a silver lining...

Take a look at the chart below. As you can see, sentiment hit a major low this summer... 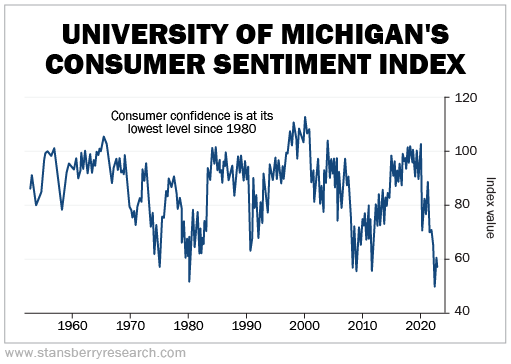 If you're nervous about the economy, you clearly aren't alone. Consumers haven't felt this bad in more than 40 years.

But here's the good news again... History tells us we should be on the verge of a major turnaround.

Consumer confidence hasn't been this low since 1980. And of course, if you've followed the markets at all since then, you know... that's when a 40-year-long secular bull market was born.

The 1970s were full of struggles for the American consumer. The decade featured volatile markets, soaring prices of household items, and supply shortages. Many people lost their savings.

If you think about it, that's not too different from today.

Now, here's a key part of this message you can't afford to miss...

Today's extreme isn't flashing the big buy signal yet. We're still not completely out of the woods. Inflation remains higher than normal. And volatility continues to plague the market.

I'm simply saying that the worst is likely behind us. That means the end is in sight.

But the truth is, even though consumer confidence bottomed in 1980, the next bull market didn't start immediately. The 40-year-long bull market wasn't born until 1982.

Consumer confidence bottomed in the summer of 2008. But the markets didn't bottom until the first few months of 2009.

That means now, more than ever, we need to watch the markets closely for opportunities. And we need to deploy our capital in the right places.

Even if it feels like everything is going wrong in the market, you can still find pockets of opportunity. That's the beauty of investing.

Fortunately, the Power Gauge helps us identify the best sectors at any given time. So at Chaikin Analytics, we'll know exactly where the big money is flowing once the markets start recovering.

But for now, our path forward is simple...

Be patient. Get confident about the coming recovery. And trust the data.

Editor's note: Marc called the bottom in 2020... right before the fastest bull market in history took off. Now, he believes he has spotted the NEXT market bottom. Tomorrow, he'll explain what's coming... And you'll learn the exact signals he's following right now to track this market's next move. Best of all, Marc will share the name and ticker symbol of what he predicts will be the No. 1 stock of 2023. Sign up for his free briefing here.

Bear markets are full of traps. And sure enough, investors who followed the "buy the dip" strategy got burned this year. But if you're bracing for more pain after the latest rally, one signal suggests it's time to brighten your outlook... Read more here.

"This cycle has played out time and time again," Chris Igou writes. A year like this can make investors feel hopeless. For a lot of folks, it might seem like the hard times will never end. The secret is, those are the exact moments that can set up the largest booms... Learn more here.