Nearly every crypto trader can share stories of both success and misery...

The tales of success are always great to hear, of course. It's nice to find out when folks make life-changing gains with just a small allocation of their overall portfolios.

But the thing is, I believe we can learn the most from the tales of misery...

After all, to become better at anything in life – including investing – we must learn from mistakes... whether they're our own or those made by others. And as you'll see in today's essay, it's imperative right now to remember one of the more miserable tales I've heard...

This tale of bitcoin misery comes from a friend who's a bit of a real estate mogul here in Los Angeles...

For the purpose of today's essay, we'll call him Leonard.

Eight years ago, Leonard was cleaning out an apartment that he owned so he could relist it. He discovered some tools that the previous tenant left behind. He had no use for them... so he decided to sell them on Craigslist.

The tools sat there for a few days... until a young man contacted Leonard with an interesting and unusual offer. This man didn't have any cash to buy the tools, but he had about $600 worth of "digital money" called bitcoin.

The young man wanted to know if Leonard would take $600 in bitcoin instead of cash.

Leonard hadn't heard of bitcoin. But the tools were taking up space and selling them would be essentially "free money"... So he agreed.

That's when Leonard learned the buyer had quit his job a year earlier to "day trade" stocks and bitcoin. Apparently, though, he wasn't very good at it... The young man had burnt through all his savings. So now, down to his final 60 bitcoin, he decided to throw in the towel and buy a set of tools so he could go back to his previous career in construction.

They loaded up the tools, and Leonard never saw the guy again. But here's the kicker...

Within days, bitcoin's price began to rise... And it kept rising for the next six months. 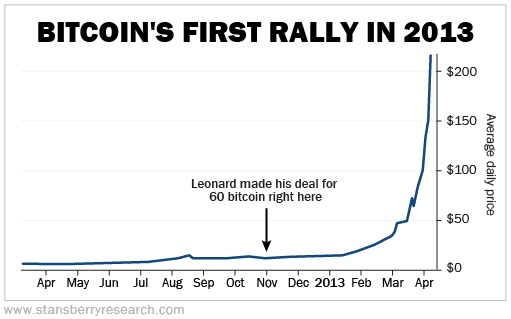 Leonard became hooked on the possibilities of cryptos. He even started "mining" bitcoin – contributing computing power to the bitcoin network to help it operate in exchange for small payouts in bitcoin.

The rally was short-lived, though... In fact, bitcoin fell 70% in a week in late April 2013 to bottom at around $65. My friend Leonard experienced his first boom-bust cycle in bitcoin.

He isn't the kind of person who throws in the towel at the first sign of trouble. He had discovered something that worked... And he planned to stick with it through thick and thin.

So Leonard kept mining and accumulating more bitcoin... And bitcoin kept experiencing incredible booms and busts over the next several years.

Within a year, Leonard's 60 bitcoin had gone from about $600 in value to nearly $68,000. That's more than the annual salary of the average construction worker in Los Angeles.

Somewhere, that poor construction worker was probably beside himself. Not only had he given up on bitcoin before one rally... he had missed out on two incredible surges higher. 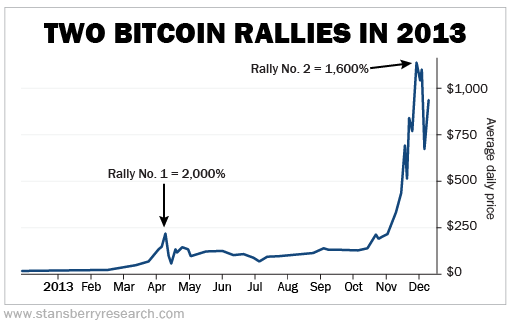 The most interesting part about this chart is how each new bitcoin rally makes the previous one look insignificant...

Bitcoin rallies are so extreme that many crypto traders describe them as "face melting."

And then, when the 2017 face-melting rally arrived, it made all the previous rallies look like tiny blips. Take a look... 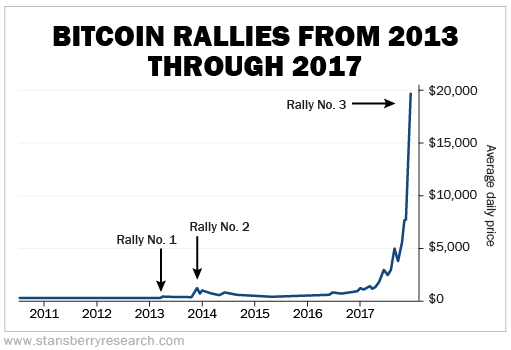 These rallies might look incomprehensible to most outsiders to cryptos.

But to me, they look perfectly rational. That's because they can be traced back to two factors – bitcoin's monetary policy and its ever-increasing adoption across the globe.

Let me show you exactly what I mean...

We'll start with how bitcoin's monetary policy influences its price...

Bitcoin has been tightening its monetary policies over the past 12 years...

In the industry, we refer to these monetary updates as "halvings"... And they're literally coded into bitcoin's software. They happen automatically with no human intervention – regardless of what's going on in the economy or what's happening at the Federal Reserve.

With bitcoin nearing its 12th birthday, we've had three halvings so far – in November 2012, July 2016, and this past May. The net effect of a halving is that bitcoin becomes much harder to acquire. And it tends to lead to a major repricing.

Since 2013, bitcoin has three distinct price ranges. Each is 10 times higher than the previous one... 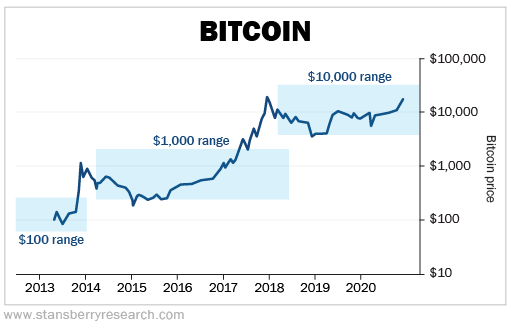 As the market adjusts to a new, more constricted supply of bitcoin, its price tends to rise. And I believe we're witnessing the start of the next major repricing. If past trends hold, we could see bitcoin prices of $100,000 or more within a couple of years... and even $1 million bitcoin in our lifetime.

That might sound crazy, but as I said, two major factors cause bitcoin's price appreciation – its monetary policy and increasing adoption. We just discussed the first part of the equation.

And now, I believe we've entered an entirely new era for bitcoin adoption...

Bitcoin is supposed to be convenient digital cash that you can send instantly to anyone else... anywhere in the world... with no restrictions. And it is that.

But ironically, a thick brick wall between the world of traditional banking and the world of bitcoin has always existed. For the first decade of bitcoin's life, banks and other financial-services companies wanted nothing to do with it.

In fact, back when I first became interested in bitcoin, the easiest way to acquire it was by doing exactly what my buddy Leonard did – mining it.

Now, more than a decade after bitcoin's creation, we've reached a point where you can buy bitcoin with a debit card or a bank transfer on digital exchanges – including the well-known Coinbase.

But it still isn't as easy as it should be...

In order to buy bitcoin on these digital exchanges, you have to set up an account and verify your identity. That means scanning or photographing your government-issued ID card... and sometimes a bank account statement or utility bill as well.

We simply can't reach mass adoption of bitcoin with that much friction involved. Plus, people have to learn to use exchanges like Coinbase to begin with.

That's why the recent big announcement from digital-payments giant PayPal (PYPL) is so important...

On October 21, PayPal ended all the friction when the company announced support for bitcoin and three other cryptos – Ethereum, Litecoin, and Bitcoin Cash.

PayPal started by giving a small segment of its more than 300 million users the ability to buy and sell crypto. Then, on November 12, the company flipped the switch... Overnight, its 286 million U.S.-based users suddenly could buy and sell cryptos as easily as logging in to their PayPal accounts and clicking a handful of links.

While PayPal users can't currently withdraw or transfer their cryptos, those features will likely come soon. For now, PayPal has built the easiest way to buy bitcoin I've ever seen.

PayPal's adoption of crypto represents a tipping point for the industry...

The company has finally done what I've waited years to see... It has turned buying bitcoin from a confusing multiday process into one that's fast, convenient, and safe.

I've always maintained that bitcoin would never reach mass adoption so long as it was hard to buy. Now, it's simple.

Even more important, PayPal has validated bitcoin and blockchain technology as legitimate in the eyes of its critics.

A stampede of other fintech companies and eventually banks will likely follow PayPal's lead in the coming months and years. As PayPal President and CEO Dan Schulman said last month, "The shift to digital forms of currencies is inevitable."

He's right. The brick wall is crumbling. We see evidence of it everywhere.

The true madness will begin when bitcoin prices breach their all-time highs around $20,000 (if they haven't already by the time you're reading this)...

As I said, I fully expect that we'll see a short-term sell-off when that happens.

In other words, is bitcoin's price floor still rising? It has been for the past 12 years... and I expect that to continue for years to come. Ultimately, we're going to see $1 million bitcoin.

The PayPal news marks the end of bitcoin's early years, and it issues in a new era...

Don't expect the pace to slow down... It will only accelerate from here. And like the face-melting rallies of the past, the next rally will push bitcoin so high, so fast, that the previous rallies will seem to disappear when we look back at the charts.

Don't be like that poor construction worker. Be more like my friend Leonard... Buy bitcoin today and hold on for the long haul. One day, you'll look back and be glad you did.

Editor's note: Eric Wade recently joined our founder Porter Stansberry for the "Capitalism in Crisis" event. They covered the impending fall of our current financial system... and shared how to prepare yourself for the inevitable rise of cryptos. They also discussed the steps you can take today to earn life-changing gains from small crypto investments. If you missed the event, catch the replay for free right here.