What Americans Fail to Grasp About China
By Steve Sjuggerud
Friday, May 24, 2019

Editor's note: The stock market and our offices will be closed on Monday in observance of Memorial Day. We'll pick back up with our normal publishing schedule on Tuesday, after the Weekend Edition. Enjoy the holiday.

"The biggest thing that Americans fail to grasp is that most young people in Beijing make more money in a week than their parents did in a year in the fields," William Lindesay said to me over lunch last week.

William is from England – but he's spent much of the last 30 years in China. He traversed 1,500 miles of the Great Wall of China on a solo adventure mission back in 1987.

Today, he is a Great Wall historian and conservationist based in Beijing.

William is right that Americans fail to grasp a lot about China. Americans think of Chinese communism like North Korea – but a far better description for China would be "one-party capitalism."

Misperceptions like these are why I've gone to China so many times in recent years. And they're why I've taken as many subscribers with me as I could.

I just got back from my most recent China trip. And once again, the changes and advances blew me away.

Every time I visit China, I am stunned at the progress. It's just relentless...

Beijing is more modern than any big city back home – by far. And it's not just the center of the city that is modern. It's everywhere.

You can go through multiple rings of the ring roads (the beltways) outside the city center, and it's still extraordinarily futuristic compared with what we are used to.

As far as I can tell, you can walk the streets of Beijing alone, basically anywhere, at any time of day, and not fear for your safety. I wouldn't dare you to do that in Baltimore – where our company is based – because I'd be too fearful of the outcome.

Don't get me wrong... Beijing ain't perfect, for sure. But it sure ain't what you'd expect.

That spread between what you'd expect from China and the real China is why I've been so excited about China in recent years.

What Americans think it's like is so different from what it's actually like. William knows this as well as anyone...

You see, we were eating lunch together – along with a few busloads of subscribers to my True Wealth newsletter – after a gorgeous, sunny day at the Great Wall of China, where visibility might have been 20 miles.

On the bus ride, William shared the fascinating history of the Great Wall over the tour-bus microphone. He knows a lot about China's past... and its present.

Here's a picture of me and the gang – and the view from the Wall... 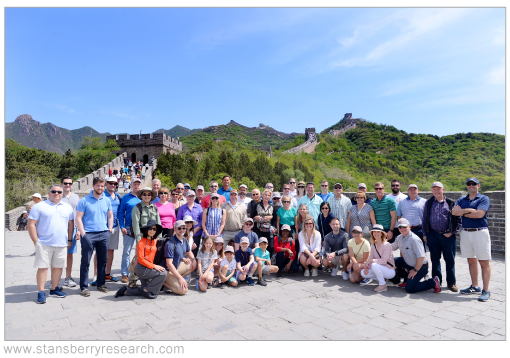 I asked William about the U.S.-China trade war. He lit up again...

"Look, there are 1.4 billion Chinese people... Do you really want to get in a war of any kind with them?" He then explained that U.S. trade doesn't matter nearly as much to China as it used to.

Once again, he's right on the money. It's another big misperception. And it's why most investors are dead wrong about China today...

Most people would be shocked to learn that China's economy today is a domestic service economy (like the U.S.) rather than an international export economy like it used to be. That might be hard to believe. But it's 100% true.

You can see it everywhere in the bustling capital of Beijing. Not only that, but just consider that China's upper-middle class is set to outnumber the rest of the population by 2022, according to consulting firm McKinsey.

Said another way... Yes, the U.S. and China trade more goods than any other pair of countries in the world – nearly $700 billion last year. But no, China doesn't need us like it used to even five years ago.

Chinese stocks have fallen since the trade war was renewed earlier this month. But the markets are getting this one wrong.

The trade war is more of a U.S. problem than it is a China problem. Things have changed. And China needs us less than anyone realizes.

That's why I expect the trade war to be a short-term blip, not a long-term issue, when it comes to investing in China. And it's why I came home from my most recent trip as bullish as ever.

P.S. I'm not kidding when I say this. In fact, while I was on the road, I began planning a major event to share the big ideas I uncovered while in China. It's an emergency briefing I'll host on Thursday, May 30, at 8 p.m. Eastern time.

I'll share the big systemic reasons Chinese stocks should soar from here. I'll even give away the best trade I see setting up right now, thanks to the trade war. The best part is, the event is free to attend. You can sign up right here.

"Nothing could have prepared me for the ups and downs that are possible in China," Steve says. "And I've seen it happen many times since that first rollercoaster ride in the early '90s." Read more about the lessons from his first experience with Chinese stocks right here.

"Most investors are scared to buy after a big move higher," Brett Eversole writes. "They assume they've missed it... that the biggest profits are behind them." Chinese stocks started the year off strong... but history points to more upside ahead. Get the details here: The China Boom Isn't Over Yet.

Market Notes
WHEN THERE'S A WAR, THESE COMPANIES WIN

The U.S. military has expensive operations all around the world, and it relies heavily on private companies for its weapons, aircraft, and other equipment. Longtime readers know we’ve called these companies “offense” contractors. And with a nuclear threat in North Korea, chaos in Venezuela, and sustained violence across the Middle East, these businesses are ready for more action…

Three prominent “offense” contractors are Harris (HRS), Leidos (LDOS), and L3 Technologies (LLL). With a combined market cap of $52 billion, these companies offer specialized technology and expertise. And today’s geopolitical tensions mean their services are in high demand… The three companies saw combined revenue of $7 billion in the most recent quarter – up double digits from this time last year.

Not surprisingly, these stocks have all outperformed the benchmark S&P 500 Index in recent years, and each recently hit a new all-time high. Like it or not, with fresh trouble always brewing somewhere, military contracts are a steady source of business… 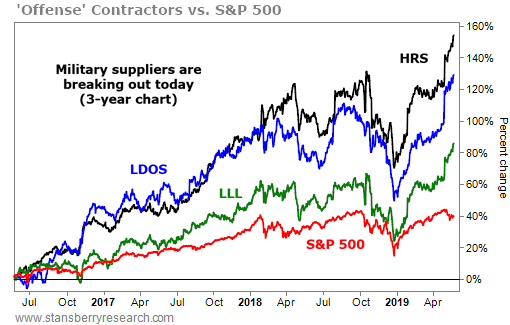