What the 1918 Spanish Flu Hints About the Recovery in Stocks
By Enrique Abeyta
Friday, May 15, 2020

At this point, you've likely heard the comparisons with the current coronavirus crisis to the 1918 Spanish flu pandemic.

This health crisis began in spring 1918 as a particularly deadly strain of the flu. It soon spread across the globe. It didn't originate in Spain... but the name stuck because Spain was particularly hard-hit.

The spread of the flu was likely worsened by the end of World War I. American troops returned from Europe and then scattered across the U.S. The world had much less international travel back then, but this mass movement of people helped the disease spread.

So the world of 1918 had some similarities to our "connected" world today. And we can look back at this period in history for clues about how today's recovery will look.

You might be surprised to hear it... but stocks could go a lot higher, even if the economy is slow to recover.

While certainly different than the current virus, the Spanish flu also had some unique characteristics... For one, it hit adults aged 15 to 44 particularly hard. This is rare in a flu (even a bad one), and it magnified the economic impact.

To put this in perspective – and the coronavirus pandemic isn't over by any means – we have reportedly seen 300,000 deaths out of a global population of 7.8 billion, or 0.004%.

Losing such a large percentage of working-age adults to the Spanish flu was a huge blow to the global and U.S. economies. Additionally, U.S. cities undertook similar shutdown and quarantine procedures as they have today.

That said, determining the economic impact of the Spanish flu pandemic on the U.S. economy is difficult. We don't have the same wealth of economic data from back then that we do today, and the death of those working-age adults was a big difference. Other factors also mean that the economic analogies to today aren't exact.

Still, a recent Wall Street Journal article provided some data from the National Bureau of Economic Research. Looking at an index of industrial production and trade, this measure fell sharply and then bottomed. It quickly recovered some of the losses, but then stayed at a lower level through 1920. (Again, the end of World War I likely also had an effect here.)

The bureau also uses an index of factory employment. This also took a hit, but then recovered to previous highs within 18 months. Part of this drop is likely due to the deaths of 675,000 people in the U.S., or 0.6% of the population.

But let's take a look at the Dow Jones Industrial Average around this period...

The stock market had a rough year in 1917 – mostly due to World War I – and was recovering in early 1918. During this period of economic disruption and incredible volatility from the pandemic, though, the stock market moved much higher. Take a look... 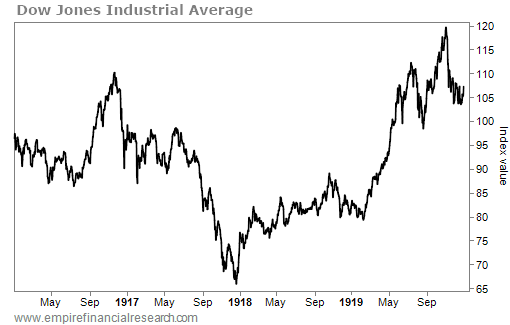 Today's economy is a lot different from back then. But even the worst-case scenarios for this crisis predict only a fraction of the mortalities from the Spanish flu. And the disruption to the economy back then was arguably worse than it is today.

Looking back at 1918, the economy took years to recover while employment moved back to previous levels and the stock market soared.

It's difficult to come up with a strong explanation for why the stock market performed like it did in 1918, much less why it performs like it has today (and we have a ton more data and insight!).

But consider that global governments are injecting huge amounts of liquidity into the economy right now...

One of the criticisms of the economic recovery of the past decade has been that we haven't seen nearly the same recovery (or growth) in economic output as we did in asset prices.

This could be a reasonable road map for the period we are in right now: Slower recovery in the real world, while the injection of liquidity "supercharges" asset prices. Just take a look at the Dow over the decade following our previous chart...

So how can you navigate through these volatile times?

In today's market, most stocks are trading in unison.

We are seeing some differences in magnitude. Industries that are the most hard-hit – like airlines, cruise ships, and hospitality – are down the most.

The industries hit the least – like e-commerce, big tech, and software – have fallen less. All but a few areas, though, are down from their highs... and they too have moved together.

Because of that, the individual fundamentals of a company matter less right now than they normally would. The market is driving most individual stocks. You must keep this in mind with any individual trades and your overall portfolio.

And patience is key. While I'm still more optimistic than the consensus is for the intermediate- and long-term outlook... I expect more volatility and market pain is ahead.

A long-term stock rally is the high-probability bet. It doesn't mean that it's a 100% certainty, but it makes the most sense for technical and fundamental reasons.

If this happens, investors could be getting a rare chance to buy shares of world-class businesses... stocks with multibagger upside potential. Don't miss out.

Editor's note: Enrique recently opened up about his incredible "rags to riches" story... He went from sleeping in a car behind a run-down Arizona motel to earning millions for himself and his hedge-fund clients. Now, he's revealing the stock-picking secret he once reserved for his wealthy clients – and showing everyday folks how to make 500% to 1,000% gains (or more). You can find all the details in his new documentary-style video... including the name of one of his favorite stocks today. Click here to watch it now.

"Find the winners, and you'll make money regardless of what the market is doing," Enrique writes. Companies that survive catastrophic economic events can help you grow your portfolio even during downturns. And these winners often share one important trait... Read more here: The Market's Crisis Winners Have This Tailwind in Common.

Most of the conventional rules you'll hear about the market don't actually work. That's why, throughout his 20-plus-year career, Enrique has boiled down all of the Wall Street pros' so-called wisdom into five investing principles that treat investors right... Read more here: To Find the Market's Biggest Winners, Look for This.

Market Notes
THIS APPAREL BUSINESS IS STRUGGLING MORE THAN EVER

Today’s chart shows a victim of the coronavirus shutdowns…

To reduce the spread of COVID-19, many of the world’s non-essential businesses have closed down. Some remaining retailers have reaped the benefits, like e-commerce titan Amazon (AMZN) and superstore chain Walmart (WMT). Today’s company makes clothes and shoes – and doesn’t have many places to sell them…

Under Armour (UAA) is a $3 billion maker of athletic apparel. It was once a Wall Street darling, with investors scrambling for a piece of the fast-growing company. But shares began plummeting in 2015 when growth slowed. Now, Under Armour’s corporate-owned locations are closed, and so are many of the other shops that carry its products. Sales fell 23% in the first quarter… And the current quarter’s upcoming results – covering more of the lockdown period – will likely be even worse…

UAA shares are down more than 60% over the past year, and they just hit new multiyear lows. With so many non-essential businesses still shuttered, and Under Armour missing expectations even before the coronavirus, its struggles will likely continue…