What the Second Coming of Reaganomics Means for a Certain Group of Stocks
By Austin Root
Saturday, December 29, 2018

Editor's note: Today, we're taking a break from our regular fare to share an important message from Austin Root, editor of our new American Moonshots publication. In this essay, he explains how a specific type of stock could change your family for generations to come...

Bought at the right time and under the right conditions, these businesses can turn a small stake into a huge nest egg and potentially change the lives of your children... and their children.

Years ago, a young, hardworking couple from Nebraska attended an investment presentation. The husband was so convinced, he stood up and announced to the room that he was putting in $10,000. His wife then upped their investment to $30,000. It was half of their life savings at that point. Their friends and family thought they had lost their minds.

That's a true story. The Midwestern couple made their fortune by owning shares of Warren Buffett's investment holding company, Berkshire Hathaway (BRK-A). By 1998, just in the city of Omaha alone, Berkshire had made 30-plus families worth more than $100 million each.

But – and here's the important part – these huge gains were made possible by scooping up shares of Berkshire Hathaway early on.

That's the key. These investors made their fortunes by buying Berkshire Hathaway when it was still a very small company.

The good news is, this wealth-creating "moonshot" phenomenon isn't just limited to one company. Sure, Berkshire Hathaway has been called "the greatest stock market miracle of our time." But take a look at all the 30 highest-performing publicly traded stocks from 1980 through 2017... 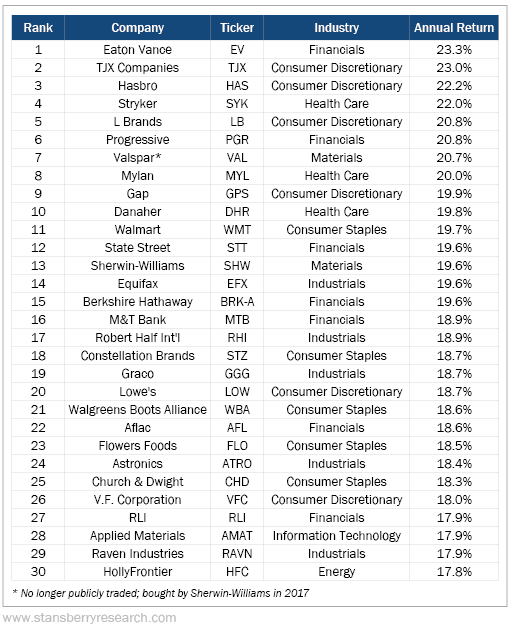 As you can see, 14 companies outperformed Berkshire Hathaway over that 37-year period.

You can see that these 14 "Berkshire beaters" came from multiple industries and different parts of the economy. But a dozen of them had one important thing in common: They were tiny companies when they began their historic runs higher.

Today, we believe a select group of small American businesses are once again poised to rise like moonshots. There's another reason why now is the time to buy these small companies... And it has to do with why the list above starts in 1980. That's the year President Ronald Reagan was elected to office. In short, we think we have the same type of pro-growth, pro-small-business president in the White House now in Donald Trump.

Reagan was a hero to small American businesses. He once stated, "Entrepreneurs and their small enterprises are responsible for almost all the economic growth in the United States."

Right now, with 2019 fast approaching, Trump is repeating what Reagan did for U.S. small businesses during the 1980s. And it's giving a number of stocks a potentially long runway of growth ahead.

But don't just take our word for it... As Geoffrey Garrett, dean of the Wharton School of the University of Pennsylvania, said, "Tax cuts plus deregulation plus increased spending. That was Reaganomics. It looks like Trump will be its second coming."

Even CNBC and MarketWatch have taken notice, recently publishing headlines like "Small-business confidence is back at [a] record high under Trump" and "Small-business owners credit Trump economic policies for record optimism."

According to survey after survey, small businesses in the U.S. are the most confident they've been since Reagan was in the White House. And when small-business leaders are this confident and optimistic, it's essentially a "green light" to grow their businesses.

In it, we've assembled a model portfolio built around 12 handpicked micro- and small-cap American moonshots. These are the stocks we believe can potentially give you the absolute best shot at achieving a life-changing return.

Now is the time to build your American Moonshots portfolio. And right now, you can get a $500 discount when you sign up. But don't delay... This offer will expire promptly at MIDNIGHT on December 31. Get started here.

Editor's note: This could be one of the best times in history to buy a special group of stocks with "moonshot" potential. To guide you along the way, we just unveiled American Moonshots – a model portfolio of 12 handpicked micro- and small-cap companies. And through the end of the year, we'll knock $500 off the regular price when you sign up. Learn more here.