What You Can and Can't Learn From Animal Spirits
By Sean Michael Cummings
Tuesday, April 19, 2022

He revolutionized the global economic system in the 1930s, and his thinking is still applied today.

In particular, he wondered why people often make impulsive decisions when it comes to money. He chalked it up to "animal spirits."

Keynes coined this term to describe when investors behave, well, like animals.

Did you abandon a good investment because of your fight-or-flight instinct? That was animal spirits.

Did herd mentality convince you to pile into a bad one? Animal spirits again.

It's a useful concept... But it's almost too broad. That makes it hard to keep in mind when you're investing.

So in 2018, economists at Wells Fargo transformed Keynes' concept into something more tangible. They created the "Animal Spirits Index" ("ASI") to measure animal-spirit levels in the markets.

It's no surprise that March's ASI reading was dismal. The index slumped for three consecutive months and is now at its lowest level since last year.

The level of pessimism in the markets right now is overwhelming... But this mood is a positive sign for investors.

It may seem strange to collect data on a concept like animal spirits. This is market sentiment at its purest. And it is therefore more a feeling than a science.

We have measures for just about everything, though. The ASI uses these in a nuanced way to quantify feelings in the markets.

Wells Fargo blends these "ingredients" together to make the "special sauce" known as the ASI.

And when you reflect on what each ingredient is measuring, it's no wonder the index is turning bearish.

Inflation kept soaring in March... Mortgage and interest rates rose... Yield spreads are out of whack... War and uncertainty persisted abroad... And most of all, the U.S. media ramped up fear-based reporting. That injected more pessimism into the whole equation.

As I said earlier, this shift in mood caused the ASI to fall for three straight months. And the most recent reading is the lowest since last year. And yet, there's another system at play underneath the animal spirits.

It's obvious when you look at the long-term ASI chart. Take a look... 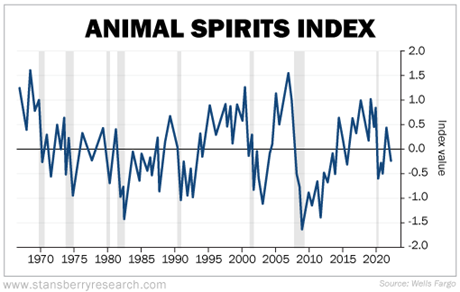 Anything below zero reflects overall pessimism. From there, it's just a question of "how negative."

The vertical gray bars represent U.S. recessions. You may notice a pattern there...

The ASI tends to reach a bottom at the end of a recession. And based on Wells Fargo’s backtesting, it has consistently signaled every turnaround since 1967 (with the exception of 2008).

This highlights what Keynes was describing in the first place...

Animal spirits may be inescapable... But it isn't a good way to assess market environments. And it tends to be most wrong when you're the most worried.

It's worth noting that today's reading isn't a historical low. But it's firmly in negative territory... and dropping month by month. And that trend alone means there's good news coming for investors.

A dropping ASI is a bullish signal. It tells us it's a great time to be invested... because the turnaround may be just around the corner.

"Pessimism is everywhere in the markets today," C. Scott Garliss writes. But history shows that now is a great time to be invested. If we remain patient and refuse to let the investment pros scare us out of the market, we could see huge returns... Read more here: Stocks Are Becoming a Contrarian's Dream.

"Don't act just because you're scared," Steve says. The market is full of uncertainty right now as rising inflation and geopolitical tensions remain prevalent. But if we let fear drive our decisions, we could miss out on a massive turnaround... Learn more here: Now Is Not the Time to Tinker With Your Investment Strategy.

Today, we’re looking at a company that stocks your cupboards…

Longtime readers know it’s a winning business strategy to sell products that people use every day. Folks will always stock up on “basics” like detergent, peanut butter, and soda… And that leads to reliable sales and profits. Today’s company is a great example…

General Mills (GIS) is a $40 billion packaged-foods titan. It boasts well-known brands such as Cheerios cereal, Pillsbury baked goods, and Bisquick pancakes. You probably have some of these brands on your shelves right now. And folks won’t stop buying them – so the company benefits from consistent demand. General Mills beat earnings estimates in the third quarter… While sales were roughly flat at $4.5 billion, the company posted adjusted earnings per share of $0.84, up 2% year over year. Plus, it raised its full-year 2022 outlook.

As you can see in today’s chart, GIS shares are performing well. They’re up nearly 60% over the past four years… And they recently hit a new 52-week high. This is another example of a top “basics” business… 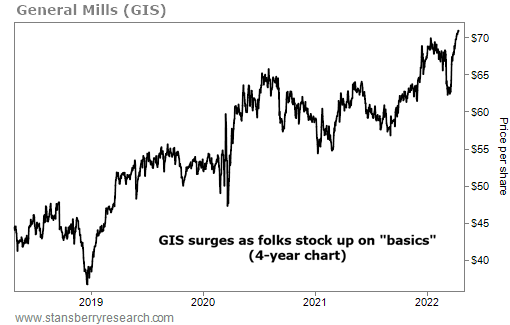