What You Don't Know About Inflation Could Cripple Your Portfolio
By Dr. David Eifrig
Friday, April 27, 2018

When Alexander the Great died, Babylon's market economy was in chaos.

Alexander's conquests brought riches to his kingdom, but not prosperity. Instead, an influx of silver led to an increase in the money supply. More silver meant silver was cheaper. And the cost of everyday items rose in concert. This spiraling inflation lasted for at least a decade – the value of the currency at the time.

This wasn't the world's first case of inflation... and definitely not the last.

Inflation has plagued savers and wage earners since the invention of currency and the market economy.

Any income investor, retiree, or business owner should know why... The higher prices go, the less you can buy with your nest egg.

For the past 10 years, inflation has gone from a headline worry to an afterthought. After extreme inflation spikes in the 1970s and '80s, the beast of rising prices has been tamed. Official measures showed price increases of well under 2% per year (the so-called "target" inflation from the Federal Reserve). In fact, policymakers have spent a decade trying to boost inflation, not tamp it down.

Now, though, the ingredients are back for higher inflation. And understanding what it will do to your purchasing power and asset values is necessary for your investment success going forward...

The unfortunate truth is... nearly no one fully understands inflation.

It's time to figure this out. Because you will see higher inflation over the next three to five years. And potentially much longer...

The recent history of inflation is simple to summarize. After the financial crisis, the Fed cranked up the printing presses and increased the money supply to juice the economy.

Despite many expectations, this did not lead to high levels of inflation. Instead, prices have remained stubborn – growing at 1% or less for most of the past 10 years.

But with the economy heating up, it's important to know what to do with your money now...

First, we're not worried about dangerous levels of inflation. The Fed has the tools to tame inflation before it gets too far above its 2% target. That always involves political risks – but so long as the Fed maintains its independence and its mandate, it will work fine.

However, inflation does change the risk and return profiles of your stock and bond holdings.

In general, stocks are a better hedge against inflation than bonds. While the underlying businesses will see rising costs like labor, they can also raise their prices with inflation. Additionally, as more money chases rising prices, it can do the same for stock prices and push them up.

In the short term, though, rising inflation sparks fears that the Fed will raise interest rates. And rising rates are typically seen as a challenge for stock prices to overcome.

But history shows stocks can and do perform just fine as interest rates rise, especially when they rise from low levels. For this reason, inflation fears can cause big down days for stocks... but in general, the stronger economy will push stocks higher.

You can do a bit better by focusing on businesses with pricing power – the ability to raise prices – and low variable costs such as labor costs.

A bond investor gets a fixed stream of income that doesn't rise. If the income you receive in the future is worth less due to inflation, you've lost out. When expected inflation is higher, bond prices fall, which pushes their yields up until they offer a fair yield with the new inflation expectations built in.

So far, we've seen that happening in some bond markets, but not others. Investing in a bond fund instead of individual bonds can protect you from these variances.

Few folks properly understand inflation. So taking just a little time to figure it you well ahead of investors who skim headlines or focus on hyperinflation doomsday scenarios.

Editor's note: Dave has been researching another hidden threat to your retirement gains... It's a little-known, nasty federal regulation that's designed to prevent millions of ordinary citizens from getting in on the best investments in America. Dave reveals it all in a special presentation – including how you can get around this rule for big potential gains. Click here to learn more.

Investors have more than inflation to worry about as time goes by... "Outliving one's retirement savings is the greatest fear of most people nearing retirement age," Dave writes. Learn more about how to avoid this risk right here: Will You Outlive Your Money?

Recently, Dave explained what those who constantly fear a market crash are missing... And he shared a few of the simplest strategies that can help you sleep well at night. Read more here: The Cornerstone of Preventing Investment Worry.

Regular readers know that “picks and shovels” companies – businesses that provide entire industries with goods and services – can be a great way to invest in booming sectors. For better or worse, war is still a major industry today… And one company is supplying soldiers with the communications tools they need…

Defense contractor Harris (HRS) makes tactical radios, wireless equipment, and land and space antennas for both defense and commercial clients. Harris is among the federal government’s 20 highest-paid companies… Just this week, the U.S. Air Force chose Harris to supply it with counter-communication systems. That contract alone was for $44.7 million. It’s easy to see how the company’s free cash flow reached a record $850 million in 2017.

Harris’ shareholders are also seeing this growth… The stock surged around 45% over the past and recently hit an all-time high. If President Donald Trump maintains our projected $686 billion military budget, Harris should continue to see a steady stream of business… 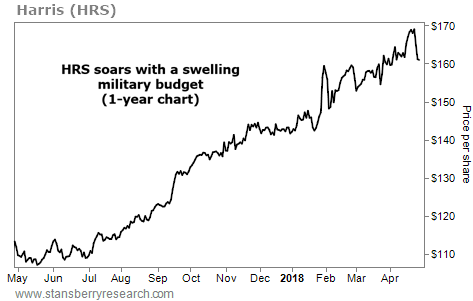