When Uncertainty Grows, These Stocks Can Absolutely Soar
By Justin Brill
Saturday, August 24, 2019

We've spilled a lot of ink discussing the massive bubble in the government bond markets today. In short, thanks to the irresponsible behavior of the world's central banks, more than $16 trillion of debt is currently trading with a negative yield.

But the huge excesses we've been following in the consumer and corporate credit markets for the past several years have not suddenly disappeared. They, too, continue to grow...

According to the Federal Reserve Bank of New York's latest "Quarterly Report on Household Debt and Credit," student, auto, and credit-card debt all rose year-over-year to new all-time highs.

Worse, for the first time since before the financial crisis, mortgage debt has set a new record, too. Mortgage balances rose to $9.4 trillion in the second quarter, officially surpassing the previous record set in the third quarter of 2008.

Likewise, regular readers know U.S. corporate debt sits at record highs today, both in nominal terms and compared to the size of the U.S. economy.

And like the madness in the sovereign bond markets, they're sure to end in disaster.

In fact, despite the "best efforts" of central bankers, we're already seeing some early signs of trouble...

For example, that same New York Fed report showed delinquencies on subprime auto loans are surging. The percentage of these loans 90 days or more past due jumped nearly 0.5% to 4.64% in the second quarter. This is roughly the same delinquency rate we saw in late 2009 following the bankruptcy of General Motors (GM).

In other words, subprime auto loans are already going bad at peak financial crisis levels... yet, by most official measures, the economy still remains healthy today. We can't help but wonder what will happen when the next recession inevitably begins.

But the troubles aren't just limited to consumer loans...

Total junk-bond defaults have already reached $36 billion so far this year. As you can see below, this is already higher than any full year other than 2016, when a crash in oil prices caused a huge wave of bankruptcies in the energy sector... 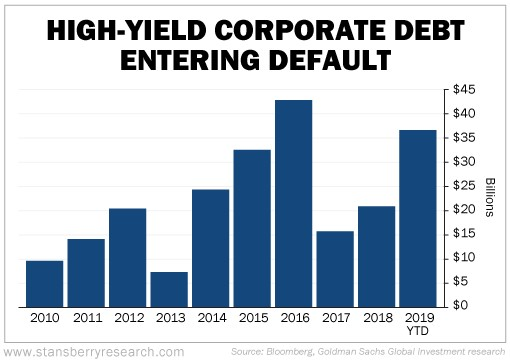 At this pace, we'll easily see more junk bonds default by year-end than we've seen at any time since the financial crisis.

Meanwhile, the three-month trailing default rate on these bonds has already hit a new post-crisis high. It's currently at 5%. That's nearly one full percentage point above the 2016 peak, according to data from S&P Global, and up from just 1.3% since last November.

So, what should you do with this information?

If you've been with us for long, you know we believe owning precious metals is one of the best ways to protect yourself from the massive risks in the markets these days.

Generally, we recommend keeping the bulk of this allocation in the form of physical gold (and silver) bullion. There is no surer way to protect the value of your savings over the long term.

But we also suggest dedicating at least a small percentage of your precious metals portfolio to gold and silver stocks today.

This is because the best gold and silver stocks provide leverage to the underlying prices of the metals. When gold and silver are rising strongly – like they have been this year – these stocks can absolutely soar.

Unfortunately, most gold and silver miners are terrible businesses...

Consider this... Between 2001 and 2018, gold went up a little more than 360%. Yet, if you had invested in a broad basket of gold and silver stocks – as tracked by the PHLX Gold/Silver Sector Index ("XAU") – you would've made less than 40% over that same time period. That's downright dismal performance.

So if you want to make the biggest profits in gold and silver stocks, you absolutely must be able to separate the relatively few high-quality companies from the "also-rans."

There's simply no one better at finding the very best gold and silver stocks.

His recommendations are up more than 530% over the last 18 years. That beats the overall rise in gold... and it's more than 10 times better than most gold stocks.

And remember... this period includes a devastating six-year bear market, where even the best precious metals stocks were crushed.

If you'd like to learn more about John's unique approach making a fortune in gold and silver stocks, there's still time...

As you've probably heard, he joined us on Wednesday night for a special broadcast, where he shared his latest thoughts on the market. He discussed his gold strategy, and how the right investments could soar hundreds of percent in the months ahead.

For now, you can still catch a replay of the event online. Click here to watch it now.

Editor's note: Gold is a great source of protection. Even better, it's in an uptrend today... the most important thing Steve looks for in an investment. So make sure you check out John's recent talk, where he explains what he looks for in gold stocks. You'll also learn how this approach helped him make more than $20 million... and helped his readers make 530% over the long term. Watch the replay right here, before it comes offline.