Why Elon Musk Should Break Up With Twitter
By Joel Litman
Wednesday, June 15, 2022

Editor's note: To understand Elon Musk's change of heart, you just have to look at the numbers. And no one does that better than Joel Litman, founder of our corporate affiliate Altimetry. In today's essay, adapted from a recent edition of the Stansberry Digest, Joel covers what's behind the Twitter-deal drama... and shares the secret that led Musk's earlier investments to outsized gains.

Elon Musk seems to be getting cold feet...

The serial entrepreneur's relationship with social media giant Twitter (TWTR) has been rocky from the start. It began when Musk bought a 10% stake in Twitter and hinted at joining the board.

Days later, Twitter CEO Parag Agrawal insisted Musk would not be joining the board. And just a few days after that, Musk decided to buy the whole company.

Back in April, Twitter's board accepted Musk's buyout offer of $54.20 per share, a 40% premium to market value. Musk hinted at several changes he'd make, like adding an edit button to posts and introducing a paid subscription model.

With buy-ins from other investors and the board, it looked to be a surefire deal... until it wasn't.

Now, it looks like Musk is trying to blow up the deal from within. Here's why...

No matter what you think of Musk, he's a smart man. He knows that if he simply walked away from the deal, Twitter could sue him for at least $1 billion in termination fees.

So instead, he keeps changing his acquisition requirements. For example, he recently announced that he'd only agree to the deal once Twitter proved that fewer than 5% of accounts were "bots."

Musk has a point. If the number of bots is higher than Twitter believes, the company might be worth less than he initially thought.

But analysts believe Musk is focusing on bots to negotiate a discount... or get out of the deal entirely.

With the markets slumping, Musk's various equity stakes have taken a major hit. That means the equity he originally planned to put up as collateral for the Twitter deal has fallen.

Between Musk's lower net worth and rising interest rates, financing for the deal becomes even more expensive – eating into Twitter's possible returns. No wonder Musk is looking for a way out.

At this point, Musk might have to decide whether the billion-dollar breakup fee is worth it...

By using our embedded expectations analysis ("EEA") framework, we can see what returns Twitter would need to justify its stock price.

Stock valuations are typically determined using a discounted cash flow ("DCF") model, which makes assumptions about the future and produces the intrinsic value of the stock.

And at Altimetry, we know models with garbage-in assumptions based on distorted generally accepted accounting principles ("GAAP") metrics only come out as garbage. Therefore, we use the current stock price with our EEA to determine what returns the market expects.

Looking at historical returns, we can see that Twitter's average Uniform return on assets ("ROA") is around 12%. This is in line with corporate averages – much lower than one might expect from such a large technology company.

Because of competition from other social media platforms, analysts project Twitter's Uniform ROA will fall to between 8% and 9% over the next two years.

Meanwhile, to be worth Musk's proposed purchase price of $54.20, Twitter's returns would need to reach all-time highs of 16%. Take a look... 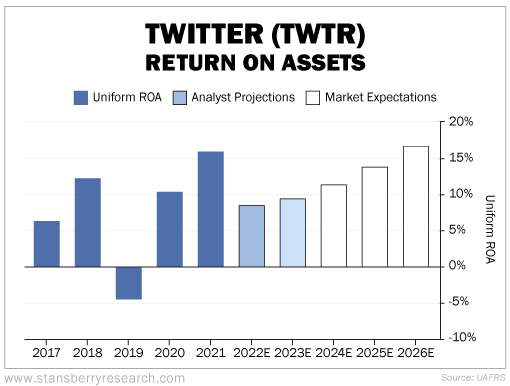 Thanks to Uniform Accounting and the EEA framework, we can see at a glance that $54.20 is an expensive price for Twitter stock. So Musk would be right to back out – even if it means paying a large fee.

Sure, $1 billion is a lot of money. But if it means Musk can renegotiate – or leave the deal entirely – it's not too big a price to pay.

Plus, even if Musk can get a better deal, Twitter is long past its days as the "next big thing"...

The returns Musk and his followers want may simply be impossible to reach. This isn't anything against Twitter as a business. Rather, it has to do with the size of the company.

From PayPal (PYPL) in the early 2000s... to SpaceX, Starlink, and the Boring Company... Musk invested a huge amount of his own initial capital in these businesses when they were new – and tiny.

If you start with a big investment in a small company, you make a lot more money when it grows. But large companies can only get so much larger.

This is what makes Twitter so different from Musk's past successes. With them, he started from ground zero.

Let's zoom in on his most successful venture to date – Tesla.

In 2004, Musk became one of Tesla's earliest investors. He eventually gained control of the company, pouring in $70 million of his own money. As Tesla grew, Musk's investment compounded...

When Tesla went public in 2010, it was a relatively tiny $1.6 billion stock. Yet Musk's investment in the firm had already ballooned from $70 million to $646 million.

Since then, the company's valuation has soared. And Musk has become the richest person in the world. He's now worth more than $200 billion, mostly thanks to his stake in Tesla. 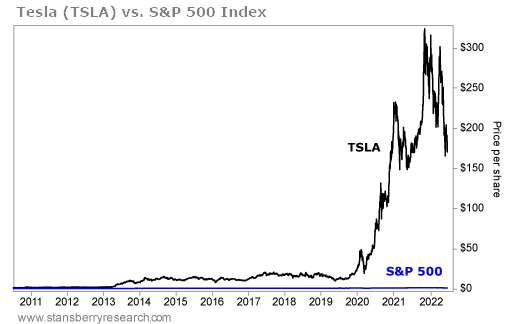 Twitter will never generate this type of return. For Twitter to climb 14,900%, its market cap would need to skyrocket to $4.5 trillion – three times as much as Google parent Alphabet (GOOGL).

For the chance to create life-changing wealth, you need to find tiny stocks that can compound over time...

It's next to impossible to make 10 times your money in a megacap company... let alone 150 times. They're just too large. But for a company that's already tiny – say, below $1 billion or $500 million – those returns are much more attainable.

And that's why microcaps are our favorite area to invest in right now.

In short, true upside potential lies in turning a small company into a major one. That's simply not possible with Musk's Twitter investment today.

Editor's note: Right now, you have a chance to profit from a huge distortion in the stock market – a secret Joel says Wall Street billionaires have been taking advantage of for years. Recently, he revealed what it means for one overlooked group of stocks... and why you could do much better than investing in FAANG stocks (or any established market giants) today. Learn more here.

"The land of microcap stocks is the modern 'Wild West' for investors," Joel writes. Most institutional investors tend to avoid microcap stocks. But if we avoid the pitfalls of the sector, us individual investors can earn huge returns while they're not paying attention... Read Joel's two-part essay here and here.

"The microcap space is a compelling investment universe," Joel writes. But microcap stocks aren't interesting just because of their short-term potential. As this success story shows, they can go on to become major players in their fields... Get the full story here.