I recently shared a list of books that I recommend as a starting point for new investors.

I chose only eight... focusing on the best books to teach new investors and traders the core lessons they need to succeed.

I also mentioned one group of notable absences from the list – the famous works of value-investing legend Benjamin Graham... and various books on the success of his most renowned disciple, Warren Buffett.

When I first published a version of my list on Twitter (@enriqueabeyta), several people asked why I didn't include these books.

Well, the first reason is that I wanted to focus on a short list. The other reason, though, is that I believe the investing philosophy outlined in the books by Graham and in the books about Buffett has probably done more to hurt amateur investors than to help them over the past 20 years.

Benjamin Graham's first book – Security Analysis – was published in 1934 and was coauthored by David Dodd. It became one of the bibles of the investment industry. His second book, The Intelligent Investor, is held in similar regard and was published in 1949.

Graham writes that stockholders shouldn't be too concerned with erratic fluctuations in stock prices, since the market behaves like a "voting machine" in the short term. Over the long term, Graham says that it acts like a "weighing machine," and the true value of a stock will be reflected in its price.

Graham also says investors should focus on the financial state of companies. A suitable investment is when a company's stock price trades at a discount to its intrinsic value, creating a margin of safety.

In The Intelligent Investor, he writes...

An investment operation is one which, upon thorough analysis, promises safety of principal and an adequate return. Operations not meeting these requirements are speculative.

Graham also criticizes companies of his day for their confusing and irregular financial reporting – elements that made it difficult for investors to see the true state of a business' finances.

As an Economist article entitled "Figuring it out" points out...

Graham showed it was possible to find companies that were underpriced by the market, often because investors were too focused on short-term bad news. This "value" approach, based on careful analysis of a company's cashflows and balance sheet, is still popular today.

Boiling down Graham's philosophy, you could say he believed stock investors should imagine themselves almost as private investors buying the underlying company.

Another Graham takeaway is to analyze the business and make sure you are buying a sound company. This creates a "margin for error" where investor capital is likely to be secure even if something goes wrong.

In and of itself, this isn't bad advice – especially from the standpoint of preserving your wealth.

The challenge for the "modern day" investor comes from applying this investment philosophy to the stock market.

In theory, stocks are ownership stakes in companies and should be the beneficiaries of the cash flows of those businesses. However, the reality is that stocks are just pieces of paper... or, in today's world, digital pieces of ownership.

As I like to put it... we're buying stocks, not companies.

While the ownership of a share does indeed come with legal and economic rights, the reality is that the companies seldom, if ever, pay out those cash flows.

E-commerce giant Amazon (AMZN) is a great example. The company went public in 1997 with a market cap of around $430 million. Today, it's worth more than $1.8 trillion.

In those 24 years, Amazon has paid out zero dollars in dividends. The company did buy back nearly $1 billion worth of shares in 2012, but other than that, Amazon has returned no capital to its shareholders.

Again, the shareholders of Amazon have the legal right to whatever cash flows the company produces, but they have not – and perhaps never will – seen any of that cash in their pockets.

Stocks are only worth what the companies are worth in one of two situations. The first is if they get bought out by another company, and then they are worth the cash or shares you receive in that buyout. The second is if they go bankrupt.

Graham's advice certainly is useful in that context. It can help you find companies that might be bought or avoid bankruptcy. Sound businesses fit both of those categories. But in day-to-day investing, it isn't necessarily useful.

What is useful is understanding what other investors deem important about a particular stock. For some stocks, that could be cash flow. But it could also be other metrics such as user or revenue growth, new innovative products, or a different indicator.

The stock market has decided that revenue and earnings growth are the most important factors in buying stocks. However, that isn't because we see those cash flows... but rather because we have agreed on it.

By focusing solely on the business aspects, Graham teaches almost a disregard for the fact that investors are buying stocks. This has created many frustrated investors through the years as they focused on buying good businesses at good prices and have avoided great companies at any price.

Another challenge presented by Graham is that many of the opportunities that existed in his world simply do not exist today. Before the Internet, FedEx (FDX), e-mail, or even photocopy machines, it was possible to find plenty of companies where you could buy $1 worth of assets for $0.50.

I don't think markets are truly "efficient." But some of the inefficiencies that existed decades ago simply do not exist today.

Graham's books are full of great "tools" for experienced investors... But on a standalone basis, his philosophy can be dangerous. In fact, upon reflection, even Buffett agrees that Graham's philosophies – while sound as building blocks – do not translate as well in the modern investing world.

In a 1988 interview with Fortune, Buffett went so far as to say, "Boy, if I had listened only to Ben, would I ever be a lot poorer."

The works of Graham are an important foundation. But his principles need to be applied properly to the realities of the modern investing world to create value for investors.

And especially for newer investors, Graham's rules can be a siren's call... luring them to the rocks of low-quality, complicated, and heartbreaking value investing.

Editor's note: Enrique has uncovered what could be the best recommendation of his 25-year career. This stock is a "backdoor" play to capitalize on the cryptocurrency market... without owning a single crypto. Enrique says this opportunity could turn every $10,000 into $110,000 over the next few years. You still have time to get in before the biggest gains are over... Get the full story here.

"You don't need a huge number of holdings for an ideal portfolio – so it's critical that you make your ideas count," Enrique writes. No matter what market you're in, it pays to hold the "cream of the crop." Check out the four criteria to consider when identifying these unique companies: Find the 'Cream of the Crop' in Any Market With These Four Steps.

You could actually lose money by listening to the financial media. That's why Enrique put together a list of five principles that have helped investors make big gains over the long term... Read more here: To Find the Market's Biggest Winners, Look for This.

Regular readers know that many brick-and-mortar stores have been unable to keep up with the e-commerce trend. And while some investors believe that the end of traditional retail is here, the best stores have found ways to keep folks coming through their doors. Take today’s company…

Dollar General (DG) is a $55 billion discount retailer. It sells cheap groceries and household products in more than 17,400 stores across the U.S. With a high store count, low prices, and – in many cases – a lack of convenient competitors, customers keep coming back. While its year-over-year sales dipped slightly in the most recent quarter, Dollar General still raked in $8.4 billion. That’s more than the company had expected, and a much better showing than most brick-and-mortar retailers faced during the COVID-19 pandemic.

As you can see, DG shares are up almost 70% over the past two years. They’ve also just hit a fresh all-time high. As long as folks are looking for essential goods at great prices, Dollar General should stay afloat amid the “death of retail”… 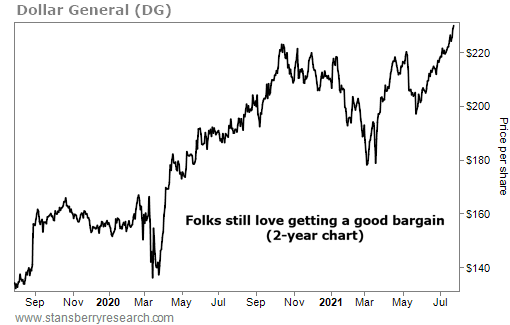