Why Powell's Words Could Be a Buying Opportunity (Yes, Really)
By C. Scott Garliss
Thursday, September 30, 2021

The dip we saw on Tuesday was simply the latest chapter.

On Monday night, ahead of Senate testimony on the Fed's COVID-19 response, Powell noted inflation could remain high for a while. The comment echoed his previous statements, including his thoughts from the central bank's policy announcement the week before.

Yet the media dwelled on this one point... because Powell's commentary wasn't what Wall Street money managers and traders – or Main Street investors – wanted to hear.

It stoked institutional money managers' fears. These folks are worried that rising oil prices will boost inflation... Meanwhile, reports of slower growth in China have made them anxious about the global economy.

So they cashed out of risky assets like stocks. In their minds, they'd rather have money to invest in stocks at higher prices than do nothing and sell lower.

But this pullback is likely just a bump in the road for stocks...

To money managers and traders, slowing growth and rising inflation would be a bad combination. They could mean that the central bank would have to tighten policy at a time when it would need to ensure easy access to funds.

Despite that, none of Powell's remarks were controversial...

In his statement, Powell noted household spending had cooled in July and August in COVID-sensitive sectors. And he said near-term supply-chain problems had held back economic output. This is the same commentary he made during the most recent Fed policy meeting a week ago.

The chairman also stated the labor market is still improving despite slowing gains in August. He then said – and this gets at the reason investors dumped stocks – inflation is elevated and will remain so in the months ahead.

He said supply-chain bottlenecks are still the biggest issue. Over time, the central bank thinks those problems will die down as more people get vaccinated... And, when that happens, inflation will return toward normal.

Again, he made these same comments in last week's policy press conference. But what spooked the market was his language about what could happen if these problems don't blow over...

Powell said if current supply-chain constraints last longer than anticipated, we could see higher inflation. And if that persists, it could force the central bank to act by tightening policy.

Here's the thing. Powell has to hedge his statements... After all, he's a conservative banker by nature. Of course he will present the worst-case scenario.

And with the financial media looking for the next doomsday article to generate clicks, that means the chairman's comments are easy fodder.

When Powell first took over the role, the market seemed to drop every time he spoke. It's not easy when the entire financial world is hanging on your every word. Because of his cautious mentality, the Fed chief said things no one wanted to hear. So, in typical Wall Street fashion, investors have always shot first and asked questions later.

Over time, that has proved to be the wrong move. I'm sure all of those money managers who dumped stocks in November and December of 2018 would love to be sitting on the roughly 70% gains the S&P 500 Index has racked up since then.

Look... The central bank is getting ready to tighten monetary policy. It's planning to start cutting back on its monthly asset purchases in either November or December. The lack of buying power in the open market will mean rates could potentially go up, due to the inverse relationship of bond prices and yields.

But money managers are forgetting a couple of important items... First, central bank policy is still flexible. That means a pending taper is likely, but never a foregone conclusion.

And second, the Fed is looking to tighten policy because the economy is recovering. America is back on the growth path. Just 16 months ago, many of these same big-money investors were worried the economy would still be in shambles by now.

Central bank policy is headed down the normalization path. That's good. And it means stock market returns are going to do the same. For the S&P 500, that looks more like 9.7% per year on a total-return basis... and closer to 11% for the Nasdaq Composite Index.

That shouldn't sound scary to you. Instead, it should sound like a continued rally in stocks from here. And it means this dip could be a great buying opportunity.

Editor's note: Scott and his team have made it their mission to "pull back the curtain" and show you what's really going on in the financial markets. So if you're not already signed up for their Stansberry NewsWire service, make sure you check it out. You'll receive up-to-the-minute news on the stories that matter, expert analysis, and more... And it's absolutely free. Click here to sign up now.

"Today's seemingly crazy inflation won't last," Steve writes. For today's market, inflation is the boogeyman. But the recent action in bond yields tells us why this situation is temporary... Get the full story here: The Market Is Telling Us Inflation Won't Last.

"If you catch these breakouts in real time, they can lead to big outperformance," Chris Igou says. The markets have recently given us a signal that one group of stocks has big upside potential ahead. It's a sector you might just be ignoring... Read more here.

Market Notes
HELPING FOLKS 'DO ANYTHING FROM ANYWHERE'

Today’s company thrives the more we rely on tech…

DailyWealth readers know that we often talk about how “digital” our world has become. You see, with today’s technology, you have the world at your fingertips. Folks are checking the news… ordering groceries… working and learning from home – all online. So we’re checking in on one of the biggest names in the tech world…

Dell Technologies (DELL) is an $80 billion tech powerhouse. It makes everything from personal laptops and desktop computers… to large-scale servers and data-protection software. Put simply, it’s focused on making sure its customers can “work and play effectively from anywhere.” That’s exactly what folks want. And it has been a major boon for Dell… Its second quarter was the best in company history – with revenues up 15% year over year to a record $26.1 billion.

As you can see, DELL shares have roughly doubled over the past two years. They’ve also recently hit a fresh all-time high. And as long as folks rely on Dell in today’s digital world, we can expect this uptrend to continue… 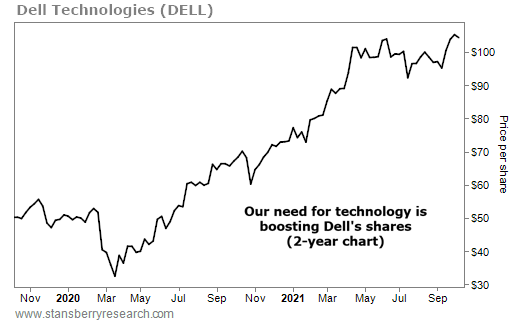