We've come a long way from the market's bottom on March 23. And if the recent rally in stocks has felt crazy to you, that's because it has been.

The move to the upside has been relentless. And it made history along the way.

Importantly, similar 50-day rallies have only happened a handful of times since 1950. But it's no reason for fear... Similar runs point to 20%-plus gains over the next year.

The first half of March felt like a death blow to the U.S. market. Stocks fell 34% in a little more than a month. It was one of the sharpest declines since the 1930s.

But the fears that sent the stock market crashing have started to subside. Businesses are opening back up across the U.S. And the market has been rebounding at an impressive rate.

The S&P 500 is back in an uptrend. We are about 10% away from making new all-time highs once again. 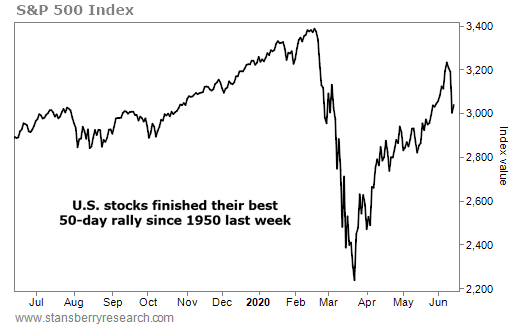 The incredible rally was a one-way trade over the past three months. Stocks continued to go up, up, up.

That fact has folks scared. Many of the COVID-19 worries are still out there. Yet stocks have been soaring. It's hard to make sense of. History says we shouldn't worry though...

Since 1950, buying after 50-day rallies of 25% or more has been a winning move. It has led to winning trades 100% of the time over the next year. And you can expect big outperformance along the way...

You probably have an idea of what to expect from long-term market returns... Over the past 70 years, a typical annual return is 7.5%. Your upside potential is much larger when you buy after extremes like today's, though...

Similar 50-day rallies have led to 9% gains in three months, 14% gains in six months, and an impressive 23% gain over the next year. That dwarfs the typical return for stocks.

In short, U.S. stocks are in an uptrend. And history says that uptrend has plenty of room to run.

It might seem crazy, given what's happening in the world. But history says the rally can continue. Now is not the time to sell.

"Whenever everyone is piled into the same idea, it typically goes against them," C. Scott Garliss says. Today, investors are overwhelmingly piled on the "sell" side of the equation. And that means a lot of money is poised to flow back into stocks... Learn more here.

"Stocks build wealth over time," Dr. David Eifrig writes. "But they don't do it in a straight line." So if you're bewildered by the markets today, plan – don't panic. A simple shift in mindset can help you invest for freedom and calm... Read more here.