Why the Housing Boom Is Sure to Continue (in Certain Areas)
By Chris Igou
Thursday, June 17, 2021

The pandemic unexpectedly kicked off some major economic trends... And it poured gas on others that had already started.

E-commerce was already taking market share away from brick-and-mortar businesses. But COVID-19 kicked that trend into hyperdrive.

Why visit a store when you can have stuff delivered the next day? It's cost-effective and sure makes life simple. Once you start doing it, it's hard to go back.

The same is true for another trend that was happening pre-pandemic. It was already a major story. And now it's even stronger, with no signs of slowing down.

Importantly, this trend also tells us that the crazy housing market won't end anytime soon... not in certain areas, at least.

People are fleeing big cities for places with no sales tax, warmer weather, and more bang for their buck.

That trend was already underway. And the pandemic scared even more people away from crowded cities and into the suburbs.

We can see this through home-buying trends in 2020. The Wall Street Journal recently came out with some hard numbers on how big the shift really is...

The article highlights that many of those fleeing LA moved to Arizona. And some households moved to Texas or Florida. It's not just California, either. We saw similar shifts out of New York, Chicago, and more.

More people left Chicago and New York than those who moved in.

Where are those big city dwellers deciding to go? Well, again, places like Florida and Texas. Southern states saw the largest influx of people by far, according to the report. Low taxes, warm weather, cheap housing... what's not to like?

This is the kind of nationwide shift that drives housing demand through the roof. It's a major tailwind for states gaining new residents.

We're in the midst of a generational shift... like the one America saw in the 1950s. That was the first major move from cities to suburbs in America. And we are seeing a similar migration today.

This trend helps explain why the housing market is so crazy in certain parts of the U.S. Speculation is part of the story. But demand for homes is soaring overall, too, especially in states like Florida and Texas. And those places seem cheap for folks moving from high-cost areas... so cash offers above asking price are no big deal.

Overall, current home supply is nonexistent. When it comes to meeting demand, homebuilders are way behind the curve. And while they will eventually catch up, that can't happen overnight.

This will drive housing prices higher in the U.S. But if we want to dig down deeper, Southern states are seeing even more demand than most places in the rest of the country. And that means the housing boom is sure to continue in those areas.

If you've been on the sidelines of the real estate market, you still have an opportunity to make money. Home prices will likely soar much higher from here before any type of slowdown starts.

Home prices in the U.S. hit a 15-year high in April. For people who lived through the last housing bubble, that doesn't sound sustainable. But a key measure shows us that prices could go even higher from here... Get the full story right here.

"There are more buyers in the market than there are homes by a wide margin," Chris says. And with the number of houses on the market near all-time lows, the price of a U.S. home is likely to explode even higher... Read more here: Homebuilders Are 4 Million Homes Behind.

Today’s company is thriving as the economy bounces back…

As regular readers know, we like to use many companies as real-world economic bellwethers. Manufacturers and similar businesses can tell us if goods and services are in demand, and if money is moving through the economy. Although COVID-19 continues to disrupt some industries, today’s company shows us that the global recovery is underway…

Rockwell Automation (ROK) is a $35 billion industrial automation and information company. It helps manufacturers in more than 100 countries control, track, program, and protect their robotics and automation systems. So when Rockwell Automation is doing well, it means that folks are busy building and making products. That’s exactly what we saw in Rockwell’s most recent quarter… The company’s sales increased 5.6% year over year, and it also saw record orders of more than $2 billion.

As you can see, shares of ROK are up about 135% since bottoming with the rest of the market last March… And they recently hit an all-time high. As the economy continues to recover, this stock should remain in an uptrend… 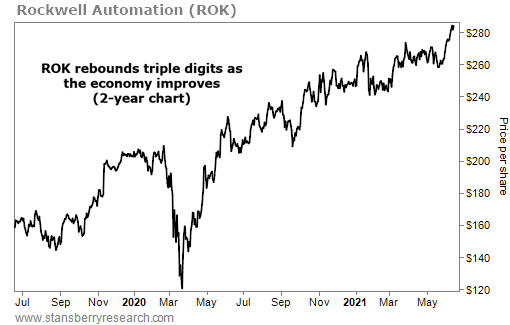