You Can't Trust the Numbers You Read on Wall Street
By Joel Litman
Saturday, June 11, 2022

Editor's note: This Weekend Edition, we're taking a break from our usual fare. Joel Litman – founder and chief investment strategist at our corporate affiliate Altimetry – says market upheaval is setting up a surprising opportunity today. So we're sharing a special updated edition of his July 2020 issue of the Health & Wealth Bulletin. It covers why it's so important to find earnings you can trust in this environment...

Few things make a stock go up or down more than its quarterly earnings announcement.

If a company beats Wall Street's expectations, the stock usually takes off. If it doesn't, the stock often plummets.

But I've discovered something controversial about these earnings announcements... something so eye-opening, I've been invited to lecture about it at Harvard, Wharton Business School, and the world's top chartered financial analyst ("CFA") societies.

Simply put: You can't trust any of the numbers you read on Wall Street.

But as I'll explain in today's essay, I've developed a way to correct for this using something called "forensic analysis."

One glance at the real data can help you see which stocks have the realistic potential to rise 1,000%... and which could be worthless.

In short, almost every single publicly reported earnings number for thousands of different companies contains huge miscalculations of earnings, assets, and even debts that 99% of investors are unaware of.

To be clear, the companies aren't lying... They're reporting what they believe to be accurate records of their earnings, based on the current accounting laws.

But after nearly 30 years on and off Wall Street – at places like Credit Suisse and as a certified public accountant at Deloitte and PricewaterhouseCoopers – I've discovered that the generally accepted accounting principles ("GAAP") are chock-full of misleading inconsistencies.

The current accounting laws simply don't allow for a true representation of the business. Profits, assets, and entire financial statements are completely distorted from economic reality. In fact, I've found more than 130 inconsistencies within GAAP that cause earnings to be distorted every single quarter.

Over decades, my team and I have developed a form of forensic accounting that allows us to see the true numbers... weeks or even months before the general public catches on.

It takes weeks to run our forensic analysis on a single company, because we have to correct or "adjust" hundreds of items in the financial statements.

But it's worth the effort. The numbers we uncover are often hundreds of percent higher or lower than what's reported to the public... which can send the stock price soaring.

A few years ago, the semiconductor company appeared to be barely making any money. But in reality, its earnings were nearly three times higher than what was publicly reported.

In a January 2015 Barron's article, I said, "The credit markets and credit-rating agencies are grossly overpricing default risk at AMD." The stock then soared 6,200% to its peak in 2021... 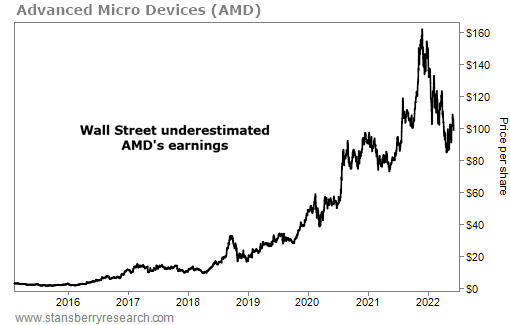 You might be surprised to learn that "forensic accounting" has this much power. But the fact is, this strategy is how we've uncovered and recommended huge winners over the years.

In fact, some of my institutional clients have paid us up to $100,000 per month for our forensic analysis. This strategy has uncovered so many earnings distortions that the FBI asked us to teach it at the National FBI Forensics Conference.

So, how can a company legally report financials that are much different from the real numbers?

Instead, they're a mishmash of overly complex, unclear, and often antiquated rules that result in huge distortions from economic reality – like whether you depreciate expenses based on five years, 10 years, or 20 years... where debt is categorized... and hundreds of "noncash" items that can distort the company's true earnings-generation ability by hundreds of percent.

In the wake of the March 2020 coronavirus crash, my team and I ran forensic analysis on the entire stock market. And we were surprised to discover that we found the biggest distortions in one tiny corner of the market.

Over the following year, the names we identified were up massively... Some soared two, three, and even nine times in value.

With the recent drop in the market, we're seeing a similar opportunity all over again. And that's why this matters even more today.

This group of stocks has far greater upside potential than any other over the next several years... And equipped with forensic analysis, we can find opportunities in this sector that have the potential to make 500% to 1,000% returns before the public catches on.

Editor's note: Joel says a massive financial "heist" is brewing... And it could be more devastating than any crash headed our way this year. But if you know it's coming – and how to exploit it – you could make hundreds-of-percent gains while other investors are left clueless. Now is the time to get in before this opportunity unfolds... Click here to learn more.