You Want to Get Out on (or Near) the Intoxicating Top
By Corey McLaughlin
Saturday, March 13, 2021

Tom Brady has a lot of reasons why he could retire today...

The famous quarterback who won his seventh Super Bowl title last month with the Tampa Bay Buccaneers has made roughly $260 million over his 21 years playing in the National Football League ("NFL"). And that's just on the field...

Off the field, Brady enjoys the trappings of fame – like private jets, no lines at restaurants, and a marriage to former supermodel Gisele Bündchen. His off-field endorsements bring in even more income. And whether you love him or hate him, Brady continues to build a legacy that many folks will remember forever.

And he certainly enjoyed the Bucs' victory boat parade last month... He threw the Lombardi Trophy from one boat to another, and was clearly drunk and needed help walking afterward. (He later blamed his state of intoxication on a "litTle avoCado tequila.")

At this point, you might think... He's 43 years old and just played in his 10th Super Bowl. It would be a nice time to step away from the violent game of football.

After all, what else is left for Brady to do but get hurt?

That's why we want to raise an important question today...

And as I will explain, this question also relates to the state of the stock market – and how you can look at it today.

What will Brady do after his playing career is over?

It's a question that most professional athletes don't consider until it's too late, if ever. (The average NFL career only lasts 2.5 years. Many football players don't plan ahead, so they get into financial trouble – like going bankrupt.)

Brady doesn't want to face the reality of retirement just yet. He is smart enough to have learned in two decades playing professional football that life in the NFL is pretty darn good overall, if you can keep yourself employed and healthy.

In other words, life feels great at the top...

We want to be at our best in anything we do. Whether it's our work, our health, or any pursuit that matters to us, it feels great when we attain it.

But like any professional athlete who becomes unsure of himself or herself before or during retirement, the downside that follows the highs can often be painful and hard to adjust to.

The same idea applies to stocks...

To put it simply, the market right now is as drunk as Tom Brady during the Bucs' victory celebration.

As Steve is warning, this "Melt Up" could go on longer, but it will end, perhaps as early as this year – and when that happens, it won't go well for most investors. But not you, if you've taken the right steps to prepare.

Here is the first thing to remember... if you have decided to invest your money for any length of time in stocks, you want the chances of your investments growing in value to be high – or at least above average, not the other way around. You want stocks to appreciate over a long period of time.

If you're interested in small-cap stocks, for example, you want to be ahead of the curve... identify great, little-known businesses... and enjoy the bull run-up before the rest of the market catches on.

By the time everyone has heard of these companies, their biggest upside has already been realized.

So, if you're buying stocks today, you want them to be cheap, not expensive...

You want to buy at the bottom, like our founder Porter Stansberry recommended to folks last March... and like Steve suggested as markets continued to rebound early last summer.

If you listened to Porter and Steve then, then you're likely pretty happy. We advise the same today because one year later, folks are now as greedy as they were scared at this time last spring.

We're not quite out of the COVID-19 pandemic, but we sure are in the heat of a Melt Up – marked by bullishness from institutional investors and pockets of euphoria from individual investors.

We're not blaming anyone... The tech-heavy Nasdaq Composite Index is up 97% from its March 2020 bottom. And the two "laggards" – the Dow Jones Industrial Average and the benchmark S&P 500 Index – are up 78% and 79%, respectively, over the same span.

Steve wrote that investors should "enjoy the Melt Up while we can" – in other words, the ride to the top, or the Super Bowl. But he also explained that the "Melt Down" that inevitably follows (for a professional athlete, the post-playing transition) is coming.

Now, longtime readers know Steve is usually pretty bullish... But he also knows what typical bullish sentiment has crossed the road into irrational euphoria from many investors.

In the February issue of True Wealth, Steve said that today's climate reminds him of the lead-up to the dot-com bubble bust 21 years ago (coincidentally, that was Brady's first year in the NFL). And to be sure, Steve's not the only one considering when the party will stop...

Charlie Bilello, the founder and CEO of Compound Capital Advisors, wrote last month about this topic. He raised the question in a blog post, "Is this 1929 or 1998?"

Bilello noted that the S&P 500 stocks continue to trade at rising valuations last seen in 1999, as measured by the Shiller price-to-earnings (P/E) ratio. For those who don't know, the Shiller P/E ratio is a measure we like to track to see how cheap or expensive stocks are relative to their fundamentals, historically speaking.

This measure is based on the average inflation-adjusted earnings from the previous 10 years. It's also known as the cyclically-adjusted P/E ("CAPE") ratio.

And in the following chart, you can see that the current reading is only topped or matched by the numbers seen ahead of the dot-com bubble and the Great Depression... 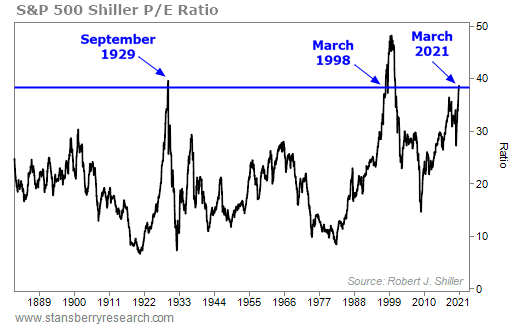 Bilello also noted that today's CAPE ratio is in the 98th percentile of its history, which dates back to 1881.

Now, we're not the first people to report this, nor will we be the last...

We've said "stocks are expensive" before. And others have obviously said the same thing over much of the past several years. But 98th percentile is pretty rare and distinct territory.

So, here's the point we want to get into today... What might happen next?

Bilello looked at average returns of the next 10 years following instances where the Shiller P/E ratio measured at least in the 90th percentile. The numbers support Steve's thesis about what folks may want to prepare for... the Melt Down, which can be a slow burn – meaning it doesn't happen overnight.

But when it's over, stocks won't be worth relatively as much in the years ahead as they are today, especially if you take inflation into account.

We can't possibly know that answer just yet.

The major U.S. stock indexes are still in longer-term uptrends today... and they could continue higher. This is exactly Steve's point, that the "top" will catch euphoric investors off-guard when they least expect it.

And to do that, you will need a plan – set in advance – for how you will get out of stocks with most of your gains still intact.

If you don't have an exit strategy – or if you don't follow it – then you will sink with the ship alongside almost everyone else.

Remember, a true Melt Down doesn't end quickly. It happens over time.

With all this in mind, Steve wants to make sure subscribers are prepared... He doesn't want anyone reading his warnings to become the "Greater Fools." Specifically, he says investors should use trailing stops to protect against major unforeseeable losses.

The coming Melt Down will be brutal... It could last for years.

This is not an easy market to participate in, although it rarely is...

A peak in stocks is usually clear to most people in retrospect... but it isn't always easy to see in the moment. Fortunately, it is possible to spot the warning signs as they flash...

Today, stocks are more expensive than they've been during 98% of S&P 500 history. And again, we're at levels only seen before massive market sell-offs.

At the same time, though, if you're already in stocks, they still have room to run higher. As Steve wrote in True Wealth...

There aren't many more people left to buy, in my opinion. All we are down to is those new investors putting more and more money to work.

That's not enough to keep the bull market going forever. But it does mean prices can rise from here.

You never know just how high a boom can go on. As the saying goes, "Markets can remain irrational longer than you can remain solvent." That goes for booms, too.

And we want to be on board for as much of it as possible... no matter how stupid it gets.

It's much more difficult to harness the more useful part of the brain when the bear market arrives and your emotions run wild.

So with that, we leave you with the most valuable advice we can give today...

Hold a diversified portfolio. And of course, mind your stops – your predetermined selling points for when things go wrong. Do these things to protect your portfolio from the Melt Down that Steve is expecting soon.

You'll be happy you did.

You'll have the cash to use again, the chance to play a few more years, and a shot at going after the equivalent of another Super Bowl... and maybe getting as drunk as Tom Brady.

Editor's note: Steve believes the Melt Down will arrive this year. If you have any money in the market today, you need an exit strategy to come out on top when things go south. And Steve says one simple step can protect your portfolio and financial well-being when the Melt Down begins... Click here to see Steve's critical message.