Your Leg Up as an Individual Investor
By Brett Eversole
Tuesday, January 11, 2022

"It's not supposed to be easy. Anyone who finds it easy is stupid."

Charlie Munger told that to Howard Marks over lunch in 2011...

Munger, as you probably know, has been Warren Buffett's right-hand man for decades as vice chairman of Berkshire Hathaway. And Marks is no slouch himself... He's one of the founders of Oaktree Capital Management, an investment company with well over $100 billion in assets.

Both men have built up many lifetimes of investment knowledge. Yet Marks felt the lunch was a great learning experience.

Munger's words might have seemed harsh. But they cut right to the heart of investing.

Today, I'll share what he means... and how it gives you – the individual investor – a leg up in the markets.

Once you think about it, you can see how important Munger's observation is...

Millions of people want to make money in the markets. With all that competition, earning outsized returns can't possibly be easy. If you think it is easy, as a lot of people do, then you really don't understand investing.

Marks felt this was so important, he used Munger's point to write the first chapter of his book The Most Important Thing. He titled the chapter "Second-Level Thinking." Here's how he described the idea...

Remember your goal in investing isn't to earn average returns; you want to do better than average. Thus your thinking has to be better than that of others – both more powerful and at a higher level...

Second-level thinking says, "The outlook stinks, but everyone else is selling in panic. Buy!"

This is the framework of contrarian investing... something that we focus on here in DailyWealth.

The truth is that you have the potential to make the biggest gains when you buy what other investors hate... assets they've left for dead. That's when you get the best opportunities to buy, with the biggest potential to outperform.

But, as Marks said, your idea has to be different – and better. Making contrarian bets just for the sake of it is a terrible idea. The most important part is being right that the market is wrong.

Again, "second-level thinking" isn't easy. The hidden advantage, though, is that this is one way you can set yourself apart from the pack as an individual investor...

You've got no one to answer to but yourself. And that means you have the freedom to make contrarian bets – the hard bets – without worry of scrutiny.

That's not the case for guys like Marks or Munger. They have investors they must answer to... Plus, everyone in the world is watching what they'll do next. Even that fact by itself makes it harder for the big-league investors to make (and hold onto) truly contrarian positions.

Most folks will tell you individual investors are fighting an uphill battle. After all, when you're competing with guys like these – who have billions of dollars to throw around – finding an edge can seem impossible.

This is one area where you have the advantage. Being a contrarian isn't easy... But it's one path to outsized returns.

Buying against the crowd is a scary move. But it can often lead to the most upside potential. That's why it pays to invest like the pros if you want to make money in stocks... Read more here: Two Reasons Rich People Keep Getting Richer.

It's human nature to be cautious about anything that seems too good to be true. But for investors, strong emotions can be a contrarian indicator. We saw this recently when stocks climbed after hitting new highs... Learn more here: Don't Bet Against Stocks at New Highs.

Today, we’re highlighting one of our favorite investing strategies…

Our founder Porter Stansberry has dubbed property and casualty (P&C) insurance as the “world’s best business.” You see, insurers collect premiums up front and pay them out later as claims. In the meantime, they invest that money – called “float” – and keep the gains. Take a look at today’s company…

W.R. Berkley (WRB) is one of the best P&C insurers in the world. It boasts more than 50 “Berkley” brands that operate in 60 countries around the globe. And it’s still succeeding today… In the third quarter, W.R. Berkley wrote a record $2.3 billion in net premiums… growing nearly 24% from the same period a year earlier. On top of that, its income from investments came in at $179.9 million, up 26% year over year.

As you can see, WRB has soared about 45% over the past 18 months, recently hitting a fresh all-time high. Porter and his team recommended shares to Stansberry’s Investment Advisory subscribers back in March 2012… And readers who followed his advice are sitting on gains of more than 280%. Congrats to the Investment Advisory team on a great call! 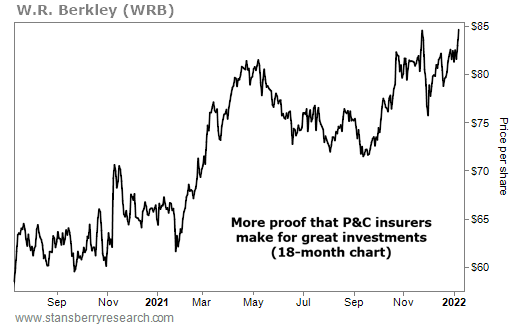