These Investors Are Overcoming Their 'Default Bias'... Can You?
By Eric Wade
Wednesday, July 21, 2021 Steve's note: Cryptocurrencies are loved today – even after a dramatic fall in prices. But my colleague Eric Wade says there's a reason for that, thanks to the potential of this technology... And tonight at 8 p.m. Eastern time, he's sharing an urgent update on a new opportunity – one he says is much bigger than any one crypto. If you're interested, read on for the details on how to tune in.

Most people stick with what they know... whether it's trying a new brand of soda... or investing in an entirely new asset class.

There's a name for this phenomenon: "default bias." In short, our brains are wired to tell us it's easier to keep things the same and avoid any potential pain that might come from change.

This is exactly what happened in the early 1990s. And today, a lot of investors are making the same mistake – but not all...

When the Internet was just starting to go mainstream, many smart folks were convinced it was just a fad.

It will become clear that the Internet's impact on the economy has been no greater than the fax machine's.

Visionaries see a future of telecommuting workers, interactive libraries and multimedia classrooms. They speak of electronic town meetings and virtual communities. Commerce and business will shift from offices and malls to networks and modems. And the freedom of digital networks will make government more democratic. Baloney.

Even the co-inventor of Ethernet, Robert Metcalfe, didn't believe in the Internet...

I predict the internet will soon go spectacularly supernova and in 1996 catastrophically collapse.

These "experts" fell for the default bias. Plenty of investors fell for it, too. And they missed out on big gains as the tech-heavy Nasdaq rose 400% from 1995 to 2000.

We're seeing the same thing happen now with cryptocurrencies and the revolutionary technology that fuels them, the blockchain.

Many of the smartest people in finance just don't get it.

For example, in May, JPMorgan CEO Jamie Dimon again warned people to "stay away" from cryptocurrencies.

And at a Berkshire Hathaway shareholder meeting in May, renowned investor Charlie Munger told the audience...

But as we've written before, bitcoin is just a cryptographically secure medium of exchanging value. It's not "fraud," or "not a real currency." It can be moved around far more easily than traditional currencies. It's not an overleveraged credit derivative fund. It's a highly secure distributed blockchain running on a global network of computers. And it's the most important disruptive technology since the Internet.

That's why some of the experts are starting to overcome their default bias... Like hedge fund billionaire Paul Tudor Jones, who once called it a "speculation." He recently announced that he's backing a $72 million crypto fund.

Meanwhile, during an investment advisory call in May 2020, Goldman Sachs representatives told their clients that cryptocurrency was not an asset class. The main points of the slide were that bitcoin provides no cash flow and is not an effective hedge against inflation.

But almost exactly one year later, Goldman Sachs has changed its tune.

Mathew McDermott, head of global assets at Goldman Sachs, released research confirming that "bitcoin is now considered an investable asset" and that "it's not often that we get to witness the emergence of a new asset class."

And while billionaire financier Stanley Druckenmiller once said, "I don't want to own bitcoin"... he now says it's "better than gold."

Today, these investors can see the opportunity. Cryptocurrencies are already revolutionizing the financial industry. Thanks to decentralized finance ("DeFi"), crypto investors can essentially become their own financial institutions. Between lending and borrowing, market making, trading, and insurance, DeFi is recreating our financial ecosystem from scratch in a new, individualized, and decentralized manner.

So don't let your default bias force you to miss out on the next great disruptive technology. If you're willing to go against it, you could make a fortune.

Editor's note: Eric says it doesn't matter if you've never bought crypto before... His latest opportunity is NOT "buy bitcoin" or any other single opportunity in the crypto world. Instead, it could help you get the huge upside of cryptos – without the volatility. And he believes that while bitcoin started the biggest disruption in the history of finance... the opportunity he'll reveal tonight will finish it. For details on how to join this free event online at 8 p.m. Eastern time, click here now.

"We live in a world where the dominant currency is engineered to bleed value," Eric says. And with the astronomical inflation and devaluation we're seeing in fiat currency lately, there's never been a better time to hold a real store of value... Read more here: Here's How the Financial 'Reset' Happens.

"The new macro trend is here," Eric writes. Cryptocurrencies are the most unstoppable force in the markets right now. And they're going to reshape one of the most important sectors in the world very soon... Get the full story here: The Biggest Macro Trend in the Markets Today.

Regular readers know the real estate market has been on fire recently. It’s a perfect environment for real estate investment trusts (REITs)… These “landlord” companies own and operate properties like apartment buildings, offices, and shopping centers. And they’re required to pay at least 90% of their profits to shareholders. Today’s company shows the effectiveness of this business model…

Duke Realty (DRE) is a $20 billion industrial REIT. It has more than 160 million rentable square feet of properties in 20 markets nationwide, including Florida and Texas. With a strong presence in many of the country’s major real estate markets, Duke Realty is profiting today… The company has leased more than 98% of its in-service properties as of the first quarter. And in the same period, its funds from operations (a measure of cash flow for REITs) grew to $0.38 per share, up from $0.28.

As you can see, DRE is up roughly 30% on the year. And it just hit a fresh all-time high. As long as the real estate market remains hot, DRE should perform well… 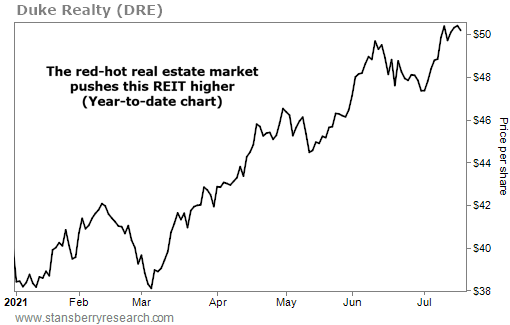