That's right. The S&P 500 is soaring once again. And it's causing big changes...

Traders are starting to relax. And we're seeing a glimmer of optimism make its way back into the market for the first time in months.

Now, you might be thinking new highs are a sign of the top. But as I recently detailed here in DailyWealth, they're not.

Knowing that, the next reasonable question is, "Well, how much higher can the market go from here?"

Most people know that this bull market is getting old. Folks look at that and assume we must be near the end. But the simple truth is, prices have a lot more room to keep rising.

Stocks are at new highs. That doesn't mean they can't go higher, though. And history shows us just how high prices could soar.

The price-to-earnings (P/E) ratio is one of the most basic measures of value we have. It helps investors answer the fundamental question: "Is this company cheap or expensive?" And it's a fantastic tool for valuing the overall market.

If you think we're at a market peak, then valuations should be at peak levels. If not, prices could still have room to run.

Here's the thing though... Expensive markets tend to get more and more expensive... especially in the final stages of a major bull market.

That might seem pretty basic. But most investors have an incredibly hard time taking it to heart.

The reality is, markets that seem overvalued can – and often do – continue on to become mind-blowingly overvalued. Just look at what happened to the S&P 500's P/E ratio during the dot-com bubble... 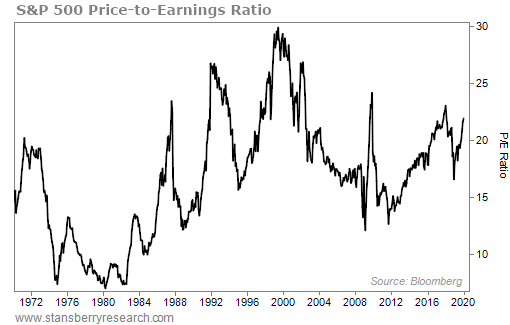 During the last true Melt Up – the late '90s tech bubble – the P/E of the broad market absolutely exploded. It peaked at nearly 30. That's a solid 37% higher than today's valuation.

Most value investors would agree that fits into the "crazy expensive" category. But we're nowhere near that point today.

It's true, stocks are getting more expensive by the P/E measure. But they haven't yet reached the full, insane heights that you tend to see at the end of a Melt Up.

That's the final push before the end of a bull market. And there's no question we're in the middle stages of a Melt Up today.

The 5,000 level is just another 12% above that. And all of this is assuming that earnings don't budge from their current levels. A little earnings growth, and that market milestone could be within reach... even without pushing the P/E to insane levels.

So, it may seem crazy now. But history shows us there's still room for explosive growth in the broad market.

The market has been expensive before. And it can continue to get more expensive.

Remember, you can't rely on the perceived value to tell you when to run for the exits. History has proved time and time again that's a foolish bet.

"I think you'll see that if you take a step back, things are much better than most realize," Steve says. It's easy to be scared with the market constantly hitting new highs. How much higher can you go once you've reached the peak? It turns out we still have a lot of room to run... Learn more here.

Market Notes
A TRIPLE-DIGIT RALLY IN DOMINATING OUR SCREEN TIME

Today’s chart shows a “World Dominator” of the Internet age…

As regular readers know, the top company in a given industry often makes a great investment. These World Dominators have strong business models, powerful global brands, and fortress-like balance sheets. Today’s company is one that’s hard to avoid when you’re online…

Alphabet (GOOGL) is the $978 billion parent company to many of the world’s favorite websites and software tools. It owns the Google search and mapping services… Gmail e-mail… YouTube video streaming… the Android mobile operating system… and countless other tech properties. Google collects information about its billions of users, then uses that info to target folks with advertisements. This has been a lucrative part of the business… The company sold $34 billion worth of ads in the most recent quarter, up 17% year over year.

GOOGL shares have steadily soared, too… rising about 160% over the past five years. As a dominant Internet company, Alphabet is in position to stay strong and keep growing… 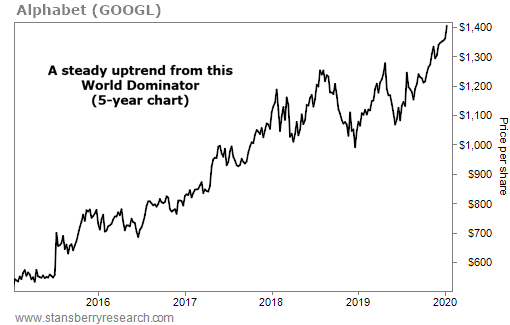