I couldn't believe all the fear I heard from readers at our 20th anniversary gathering in Vegas...

"I'm scared, Steve. We've got the trade war, impeachment proceedings, and plenty of other uncertainties. Not to mention most folks are expecting a global recession to begin any time."

"Plus, the market has been flat for months... Is your Melt Up ever going to arrive?"

Wow! That's a lot of negativity. And even after the last few weeks, when stocks rocketed to new all-time highs, those big overarching problems still exist. Plenty of folks are still worried.

It's tough to know what to make of everything that's going on. So today, we'll take a close look at what's really happening out there.

I think you'll see that if you take a step back, things are much better than most realize...

First of all, stocks have now been hitting new all-time highs for most of the last month.

That, my friend, is a bull market. And let's size up this bull market for just a moment, before we think about how to proceed... 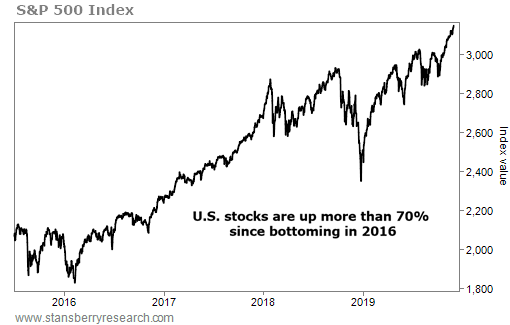 Looking at a shorter time frame... The market is up roughly 35% from its Christmas bottom. That's less than a year ago!

So now, instead of asking when the Melt Up will arrive, I expect folks will be asking an entirely different question: "The market is hitting new highs – shouldn't I be scared?"

You might think that stocks reaching an all-time high would be bad news. When you've reached the peak, how much higher can you go?

It turns out, we're not talking about mountain-climbing here...

It turns out, stocks were up – a lot.

If you were simply a "buy and hold" investor, you would have made 7.7% a year on stocks during that time (not including dividends).

However, for the 52 weeks after a new high, stocks outperformed their typical return – delivering an 8.5% compound annual gain.

So, at the very least, you shouldn't worry so much! Stocks tend to outperform after new highs, not underperform.

So even though the stock market is up – a lot – over a very long bull market... we still have room to run. A lot of room.

Simply put, we're not at the end yet. So don't sit on the sidelines right now. Trust me – you will have plenty of time to do that when we are on the opposite side of the Melt Up.

"Trying to eliminate all risk can be a risk in itself," Vic Lederman says. "And it certainly has a cost." We may see more volatility before this Melt Up ends. But if you decide now is the time to get out of Dodge, your returns could suffer... Get the full story here.