This Metal Will Soon Be More Precious Than Gold
By Steve Sjuggerud
Thursday, November 1, 2018

Robert Friedland has a controversial reputation in the world of precious metals...

His company, Ivanhoe Mines, went to the ends of the Earth – Mongolia, of all places – to develop the Oyu Tolgoi mine. Today, it has some of the planet's largest reserves of copper.

Over the years, Friedland has had run-ins with the U.S. government... cut a $20 million check to the Department of Justice after a controversy at a gold mine in Colorado... cashed more nine-figure paydays than I can count... and proven time and time again to be one of the most outspoken personalities in the industry.

He is known for speaking his mind, regardless of whether it's what people want to hear. And last month, he made headlines yet again when he told the Mining Journal that palladium could become "more valuable than gold."

It sounds crazy. But there actually might be something to this wacky idea.

I know what you're probably thinking right now...

But Steve, palladium isn't a precious metal. Isn't palladium the stuff that makes dirty cars less... well, dirty? And aren't we supposed to be driving more electric vehicles in the future? And wouldn't that mean we would need less of this stuff, not more of it?

If that sounds like you, you're correct. And I'm with you.

The natural order of things – in my investing lifetime – has gone something like this...

Platinum is the most expensive precious metal. Gold is in second place, a couple hundred bucks per ounce cheaper. Then, in a distant third place, is palladium.

Consider where things stood at the start of this decade. On January 1, 2010, the price per ounce of each of these commodities looked like this:

The natural order of things was in place. But the gap has been closing, thanks to a crazy 20-year trend... Within the past couple of decades, palladium made the leap from industrial metal to precious metal – and nobody noticed.

Palladium used to be difficult to "cast," so it wasn't used in jewelry. But the casting problem has been resolved in recent years, and now palladium can take its place among other precious metals in the jewelry store.

Still, you might think that a metal best known for its use in catalytic converters to make cars less dirty wouldn't be considered a precious metal...

But how would you define "precious"?

As I mentioned, the price of palladium today is nearly $1,100 an ounce. To put this in perspective...

Don't you consider both platinum and gold to be precious metals?

Palladium is priced right between them. It's a precious metal, no question about it.

If the recent trend continues, it sure could.

Both metals bottomed around August 15. Gold is up just about $45 an ounce since then. Palladium went up roughly $250 an ounce. If that trend continues, palladium will be more valuable than gold within a few short months.

Either way, the trend is in favor of this precious metal. And given how misunderstood it is by most investors, prices could soar much higher from here.

Steve recently sat down with a legendary commodities investor to get his take on a potential opportunity in another hated asset... Get the full story here.

"Massive price swings are features, not bugs, of owning commodities," Steve writes. "And I believe the next upswing is already underway..." Learn more about this incredible opportunity right here: Hundreds-of-Percent Upside From the Ultimate Cyclical Asset.

Today, we’re checking back in on one of our favorite retail “survivors”…

Regular readers know the rise of e-commerce has put many traditional retailers under pressure. But plenty of companies are adapting to the shift. We’ve seen strong performances from retailers such as Macy’s, Dollar General, and Ross Stores. And today’s company is providing more proof that retail isn’t dead…

Burlington Stores (BURL) is a leading discount retailer. The $12 billion company operates 651 stores across the U.S. And as we noted in March, these stores offer almost anything a shopper could want… including coats, handbags, shoes, home goods, and beauty products. Burlington’s shift to a “one-stop shop” model is still working today. In the second quarter, the company reported sales of nearly $1.5 billion, growing 9.9% from the same quarter last year.

As you can see in today’s chart, BURL is on a huge winning streak. Shares are up more than 80% over the past year, and they recently hit a fresh all-time high. As long as people prefer easy shopping solutions, this stock should continue higher… 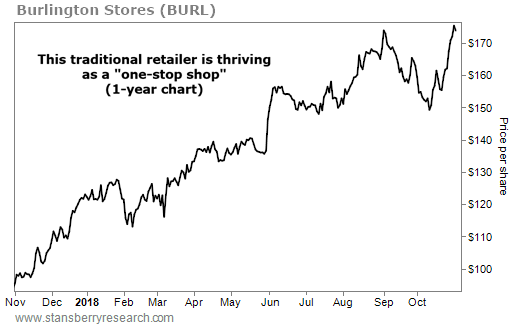